Not only was Biden wrong about core issues underlying gun rights, but a news report effectively explained why his being wrong matters so much.

Thursday night’s news programs were dominated by the story of President Biden’s speech earlier in the evening, in which he pressed for more stringent gun control measures. If I were to pick apart his remarks—and, believe me, there is fertile ground on which to do so!—I might zero in on his claim that “…the Second Amendment…is not absolute. It was Justice Scalia who wrote, and I quote: ‘Like most rights, the right Second Amendment — the rights granted by the Second Amendment are not unlimited.’ Not unlimited. It never has been.”

Really? “The right of the People to keep and bear arms shall not be infringed” sounds pretty absolute to me. But that’s just me. What matters more is that Biden’s supposed quote from the late Antonin Scalia isn’t quite accurate. Indeed, it changes a word that is critical to understanding the nature of the rights that the Founders enumerated in our Bill of Rights.

It’s true that, in the Supreme Court’s District of Columbia v. Heller decision, the learned Justice Scalia did raise questions of limitations to the nature of weaponry covered. What Scalia wrote contrasts with remarks from Tench Coxe (1755-1824), a political economist and a delegate from Pennsylvania to the Continental Congress, who emphatically stated that the weaponry referred to by the Second Amendment comprised “every terrible implement of the soldier.” Nevertheless, on the core issue, Scalia got it right and Biden misquoted him. Thus, Scalia did not refer to the rights “granted” by the Second Amendment; rather, he referred to “the right secured by the Second Amendment….”

This distinction is lost on far too many Americans, including (perhaps deliberately) President Biden and his fellow Democrats. Our Founders, in their wisdom, believed that rights such as those enumerated in the first ten amendments to the Constitution were not granted by a beneficent government, but were God-given rights that the Constitution pledged to protect.

When it comes to inaccuracies, it’s also important to zero in on Biden’s call for “Repeal of the immunity that protects gun manufacturers from liability.” This repeats a theme he brought up in his State of the Union address, one that sees him advocating for the repeal of “the liability shield that makes gun manufacturers the only industry in America that cannot be sued. The only one.” That was wrong then and it was wrong Thursday night.

The truth is that the firearms industry is far from the only industry that enjoys liability protections. Those liability protections are the same ones that keep you from suing General Motors just because the driver who smashed into your car happened to be driving a Chevy. Manufacturers are liable for badly made products, not for well-made products that are used badly.

To give context to the fundamental errors in Biden’s speech, overnight another, seemingly unrelated news story surfaced. It tells of the end of a manhunt for a convicted murderer who had escaped from a prison bus in Texas on May 12.

The fugitive, Gonzalo Lopez, was killed in a shootout with Texas lawmen late Thursday night after he crashed the truck he had presumably stolen from a residence in Centerville, Texas. An adult and four children were found dead in that residence. 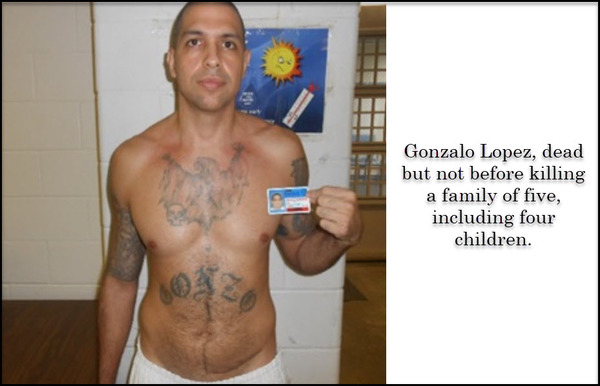 So far, none of the stories I’ve seen about this incident indicate how the family was slain, or whether Lopez, who had been on the run for three weeks, already had a gun when he broke into their vacation cabin. Some reports say that, in addition to the pickup truck, Lopez had stolen firearms from the home, but this belief has not been confirmed.

I doubt that too many more details of this story will be forthcoming. In fact, I predict that this story will fade away in short order. It’s an inconvenient story, coming as it does on the heels of Biden’s appeal for stricter limits on gun ownership and on the type of firearms that citizens should be permitted to keep and bear.

Reading the minimalist facts about that family’s tragic demise makes me wonder if the family actually had access to a firearm to defend against an escaped convicted murderer breaking into their residence. I wonder if they called 9-1-1. Presumably, the police arrived just in the nick of time to draw chalk outlines around their lifeless bodies.

And if they did have a weapon, I wonder if they implemented Joe Biden’s now-often-quoted advice that, to protect your home, you should “get a shotgun…and fire two blasts outside the house….” After all, he promised that doing so would frighten away anyone trying to get in.

I wonder if the family had guns that were, as Biden advocated Thursday night, “responsibly secured” with trigger locks. If so, I guess they didn’t manage to get them unlocked in time.

But whether or not there was a gun or guns in the home, and whether the family might have had at least a fighting chance against this violent criminal, the incident seems to prove something that’s especially unhelpful to those who claim that proposals for more restrictive gun laws are not “about taking away anyone’s rights” but are, instead, “about protecting children… about protecting families…about protecting whole communities.” One might even say that the incident shoots holes in the gun control narrative.

What this incident proves is that, no matter how many laws are passed to restrict innocent people from having the means to defend themselves, criminals will always find ways to have guns, because criminals, by their very nature, neither respect nor follow the law. And it also proves that when seconds count, the police are just minutes away.

Author’s Note: Stu Tarlowe has, since 2010, contributed well over 150 pieces to American Thinker. For some 15 years, he was the personal editor for the late Barry Farber; more recently he was employed as a staff writer for a magazine forecasting political, financial, and societal trends, but when he had to be hospitalized for COVID, he was replaced. Now recovered, he writes on a variety of topics (political and personal) in his newsletter at https://stutarlowe.substack.com and is seeking another gig as a writer/editor/proofreader.