Don't be fooled by rhetoric. It's not the Marxists we have to worry about.

To win any fight, we must first know our enemy.  There are those who argue we are in a struggle with Marxism, though in reality, we battle the organizational and operational tenets of the Marxist tree, not the ideology itself.  We know that this is not a Marxist movement because it ignores Marxism’s core clientele: the workers.  In fact, these people despise the Marxist’s traditional constituents.  Instead, they toil for a small minority of the “marginalized” in society whom middle Americans find to be fringe and anathema to their core values.

Even then, their movement doesn’t seek a revolution of the marginalized.  They define the ills of society so that governments can unilaterally impose restitutive “justice”: defunding law enforcement and prosecution, promoting violence and riots, and forcing curriculum indoctrination throughout the educational system.  They seek power through chaos.

If there is a power that wishes to usurp a democratic and free market society, then to attack with the chaos of a Marxist “revolution” will drive those most affected to willingly surrender freedom for security — You will own nothing and be happy! — and into the warm arms of the promise of a new civilization dedicated to the progress of mankind.  Italy once succumbed to the promises and adopted fascism upon the bourgeoisie’s and governing elites’ fears from the encroaching evils of socialism, as had been witnessed in Soviet Russia.

Don’t be fooled by rhetoric.  Fascism is an evolution of socialism.  The difference is how the economy is managed.  Ludwig von Mises summarized the primary differences between socialism (the Russian pattern) and fascism (the German pattern).  Socialism owns everything, and the individual is simply a serf to the state; fascism “preserves private ownership of the means of production and keeps the appearance of ordinary markets,” though these markets are highly controlled by the state.  The German pattern, Nazism, introduced, through its barbarity, the dark specter of fascism, but fascism’s evil birth was in Italy.

Disillusionment following WWI was the catalyst for fascism.  Benito Mussolini, an avowed socialist, too became disillusioned and, with the partnership of neo-Hegelian philosopher Giovanni Gentile (who stated, “Fascism is a form of socialism; in fact, it is its most viable form”) developed a system and philosophy that nationalized the will of the people and integrated limited markets into the state.

Fascism has been described as Corporatism.  Many mistakenly believe that it was centered on capitalism and nationalism and was thus a right-wing movement.  It was not.  Mussolini termed Corporatism (the state) as a means of economic and societal organization and control within the confines of fascism; the state is the corporation, and the individual silos of the economy, which he termed syndicates, are the means to collectivize society.

In a 1926 speech, Mussolini laid out the role of markets within the state:

The Ministry of Corporations is not a bureaucratic organ, nor does it wish to exercise the functions of syndical organizations which are necessarily independent, since they aim at organizing, selecting and improving the members of syndicates[.] … [I]n the centre and outside, [the] integral corporation becomes an accomplished fact, where balance is achieved between interests and forces of the economic world. … The achievement of these aims is speeded up by the fact that all economic organizations, acknowledged, safeguarded and supported by the Corporative State, exist within the orbit of Fascism; in other terms they accept the conception of Fascism in theory and in practice.

It is the actual structure of Mussolini’s fascism — the partnership between governmental authority and economic syndical cooperation — that is the model for current attempts at using fascism to infiltrate and control global economic, political, and cultural institutions.

Capitalism has the power to shape society and act as a powerful catalyst for change. …  When we harness the power of both the public and private sectors, we can achieve truly incredible things.

No, Larry Fink, Bill Gates, George Soros, nor any of the other Davos creeps is a Mussolini lurking in the weeds.  Each of them is a steward of individual syndicates, but the power rests in the corporation: the World Economic Forum.

Today, we see the WEF as the binding strap on the fascio, or syndicates.  It acts as both an ideological center and an organizing force for universally stated goals for the management of mankind.  A brief listing of these WEF U.S.-based partner corporations (below) demonstrates the syndicates organized under the umbrella of the corporation. 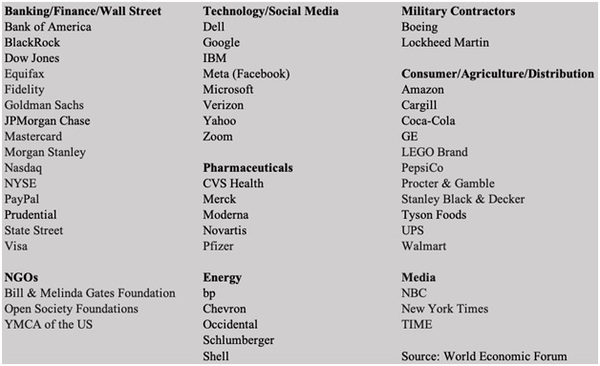 As we enter a unique window of opportunity to shape the recovery, this initiative will offer insights to help inform all those determining the future state of global relations, the direction of national economies, the priorities of societies, the nature of business models and the management of a global commons. Drawing from the vision and vast expertise of the leaders engaged across the Forum’s communities, the Great Reset initiative has a set of dimensions to build a new social contract that honours the dignity of every human being.

The implementation of ESG (Environmental, Social and Governance), as an example, has been ordered from the WEF to the world financial syndicates, and Mr. Fink is taking his orders seriously by aggressively pushing ESG.  ESG is fast becoming the great culling of industry.  While there has been recent pushback, Davos and the WEF are not deterred.  ESG uses metrics to provide social responsibility scores for corporate commitment to woke management and the war against climate change.  ESG will be a requirement for Securities and Exchange Commission (SEC) filings in the near future.  It is already having deleterious effects on the oil and gas industry and is one of the origins of our current energy crisis.  The energy syndicate, too, has followed its orders.

The Fascist conception of the State is all embracing; outside of it no human or spiritual values can exist, much less have value. Thus understood, Fascism, is totalitarian, and the Fascist State – a synthesis and a unit inclusive of all values – interprets, develops, and potentates the whole life of a people.

We are not fighting Marxism, socialism, or communism.  This is a top-down revolution.  We are fighting a fascism that surpasses Mussolini’s and Hitler’s dreams of complete power over the people, for this is global in nature.  The sooner we can develop the strategy to stave off these attacks and possibly even beat them back, the sooner we can start the long march toward freedom once again.  Without defining and understanding the enemy, we will lose.

Frederick Hink was a long-time market intelligence consultant, executive director of an education advocacy group, and former politician.  Fred writes at frederickhink.substack.com and can be reached at [email protected]. 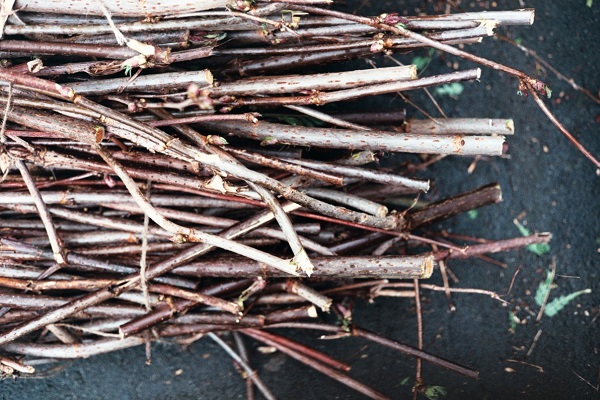