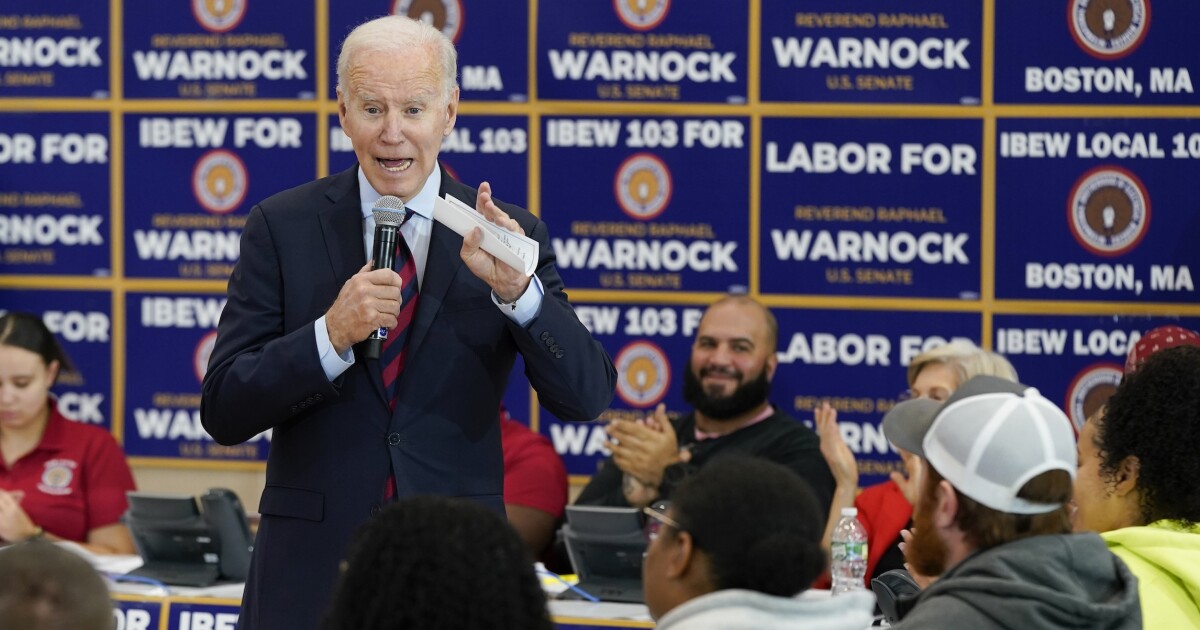 President Joe Biden is sticking with the low-key approach to campaigning he took in the midterm elections, avoiding the state of Georgia as its voters decide a Senate runoff between incumbent Raphael Warnock (D-GA) and GOP challenger Herschel Walker.

President Joe Biden is sticking with the low-key approach to campaigning he took in the midterm elections, avoiding the state of Georgia as its voters decide a Senate runoff between incumbent Raphael Warnock (D-GA) and GOP challenger Herschel Walker.

Biden was roundly criticized for skipping the battleground states of Arizona, Nevada, and Georgia in the fall in favor of private fundraisers and blue state rallies, but that strategy was rewarded as Democrats exceeded expectations in November.

Rather than heading to Georgia to campaign with Warnock in the runoff, Biden shipped up to Boston, some 1,000 miles from the Peach State border, for an event aimed at boosting his campaign.

“I’m going to Georgia today to help Sen. War — not to Georgia. We’re going to help Sen. Warnock because I’m doing a major fundraiser up in Boston today for … our next and continued Senate candidate and senator,” Biden said in response to a question last Friday.

“We need that 51st vote,” Biden said once he arrived at the Democratic phone bank in Massachusetts. “I know Rev. Warnock well.”

Despite the distant location, Biden’s Boston event featured “Labor for Warnock” signs plastered in the background.

If the rest of the midterm elections are any indication, Biden’s low-key approach could be rewarded with another Democratic win.

White House chief of staff Ron Klain was explicit about Biden’s staying away from battleground state campaign rallies, especially with his approval ratings remaining in the low 40s.

“Both President Obama — I was here; I’ll share responsibility for it — and President Trump got walloped in the midterms. So I don’t think it should surprise anyone that we’re not using the strategy that failed in 2010 and the strategy that failed in 2018,” Klain told CNN host Anderson Cooper. “Instead, what you’re seeing is the president is traveling the country with Democrat elected officials, with Democratic candidates.”

If Warnock wins reelection in Georgia, it would be the cherry on top of the cake of a new innovation in midterm campaigning, argues Democratic strategist Brad Bannon, with Democrats actually gaining a Senate seat.

“To restate the obvious, the midterm strategy worked pretty damn well,” Bannon said. “The total picture will emerge after we see what happens in Georgia.”

Both Biden and Warnock have been asked about the president’s lack of presence in the runoff.

Biden mentioned the Boston fundraiser in response to a question about why he wasn’t going to Georgia. Warnock dodged questions last week about whether or not he’d welcome Biden on the campaign trail and whether Biden should run again in 2024.

“I don’t control the schedule of the president of the United States,” Warnock said. “But we’ve got a little over two weeks [left], and we’ll see who shows up.”

An Emerson College poll conducted this week found Warnock is 2 percentage points ahead of Walker, 51% to 49%, but his edge is within the survey’s 3.2-point margin of error. The same poll found Biden’s approval is at 42%, a 1-point improvement compared to Emerson’s final preelection survey. Biden’s 52% disapproval is steady.

Biden couldn’t have asked for better midterm results given the circumstances, Bannon argues, describing the effort as wildly successful.

Whether that’s an indication that Biden should run again in 2024 remains to be seen. Obama and Clinton won second terms after losing huge numbers in the House during their first midterm elections, while Trump, who lost fewer House seats than either, fell short against Biden in 2020.

Having Trump still soaking up much of the spotlight this time around may have helped too.

That contrast may be tougher to highlight for future presidents once Trump finally cedes the spotlight.

“Biden has no reason to get on the front lines because Trump campaigns for him,” Bannon said. “I think the context for Biden’s strategy is to let Trump be Trump. It seems to me that in the last couple of weeks, Trump has done everything he could humanly do to help Warnock.”