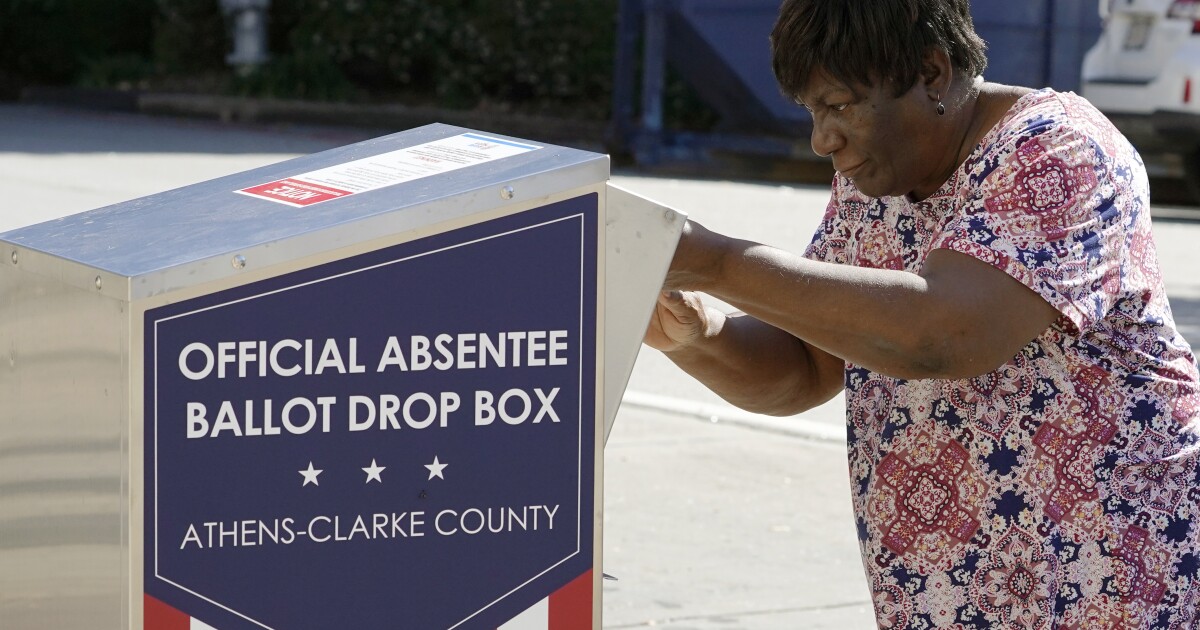 Georgia has continued to smash early voting records this election cycle despite an uproar over its election reform law last year that critics denounced as voter suppression.

Georgia has continued to smash early voting records this election cycle despite an uproar over its election reform law last year that critics denounced as voter suppression.

“The record early voting turnout is a testament to the security of the voting system and the hard work of our county election officials,” Secretary of State Brad Raffensperger said. “As Secretary of State, I promised to strike a strong balance between access and security in our elections, and these numbers demonstrate that I kept that promise and that voters have confidence in Georgia’s elections.”

Ballots cast by Republicans outpace the ones from Democrats by 308,745 to 226,952, with 3,600 nonpartisan ballots cast through May 17, per the secretary of state’s office. Additionally, most of the early voting took place in person, which encompassed 496,971 ballots compared to 42,326 absentee ballots.

The recent numbers continue a trend of surging early votes in the Peach State. On the first day of primary voting in Georgia, the state tripled the number of early ballots cast compared to 2018 and doubled the total achieved in 2020. Early voting is also expected to rise further in the state as voters take advantage of the process in the final days before Tuesday’s primary election, Raffensperger said.

Raffensperger had taken heat from both sides over election policies in the state. Following his defeat to President Joe Biden in 2020 in the once ruby-red state, former President Donald Trump pushed unsubstantiated claims that rampant voter fraud deprived him of an electoral victory. Trump reportedly called Raffensperger and implored him to “find” 11,780 votes that he needed to reverse his election loss. The call has been subject to an investigation by the Fulton County District Attorney.

Against the backdrop of Trump’s claims about the election and concerns about election procedures that were adjusted during the pandemic, Georgia passed the Election Integrity Act of 2021, which included a bevy of reforms such as standardizing rules for early voting to include a 17-day window for ballots to be cast early. Democrats such as Biden chastised the measure, contending it amounted to voter suppression.

“Parts of our country are backsliding into the days of Jim Crow, passing laws that harken back to the era of poll taxes, when black people were made to guess how many jelly beans in a jar or count the number of bubbles in a bar of soap before they could cast their ballot,” Biden told Al Sharpton’s National Action Network last year.

Georgia’s primary contest has been regarded as another key test of Trump’s clout among Republican primary voters. The former president began the primary season with a perfect endorsement record, but suffered blemishes this past week with glaring defeats in Idaho and North Carolina.

Trump has backed former Sen. David Perdue (R-GA) for Georgia governor, but Perdue has been trailing incumbent Gov. Brian Kemp (R-GA) in the polls. Unlike Perdue, Kemp has refrained from going all-in on Trump’s election fraud claims. The winner is expected to face off against Stacey Abrams, a Democrat.