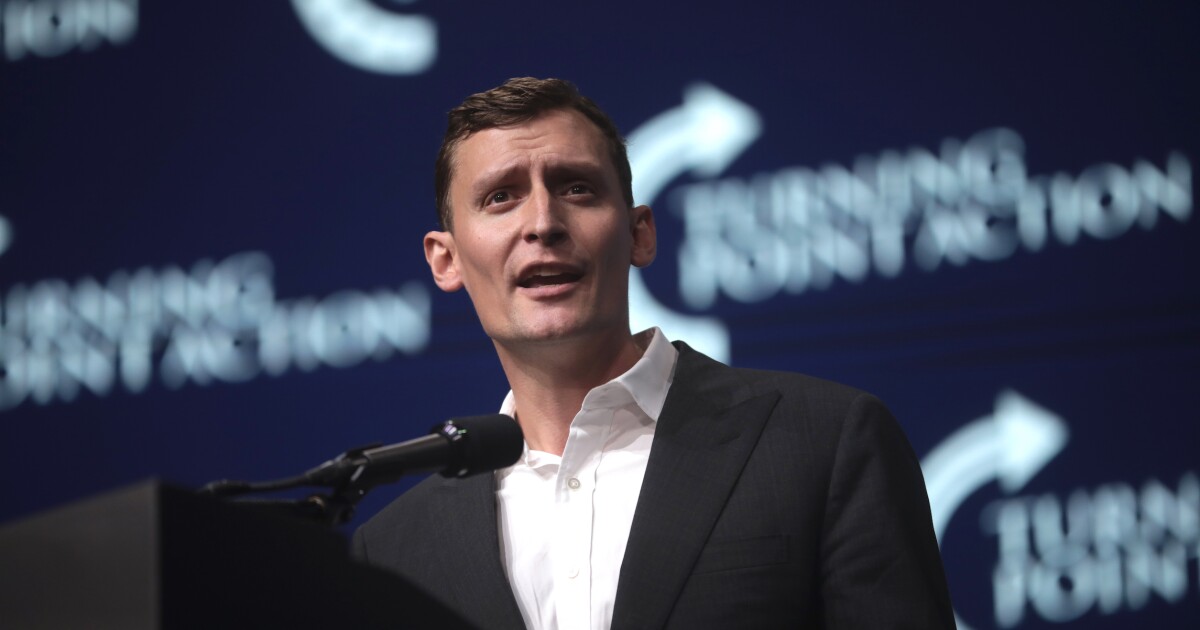 A new campaign ad portrays Blake Masters, the venture capitalist vying for the GOP Senate nomination in Arizona, as an antisemite.

A new campaign ad portrays Blake Masters, the venture capitalist vying for the GOP Senate nomination in Arizona, as an antisemite.

The advertisement, commissioned by GOP rival Jim Lamon’s campaign ahead of former President Donald Trump’s Thursday endorsement of Masters, largely draws upon an anti-war article Masters wrote as an undergraduate at Stanford University.

The 30-second ad quickly scans across different spots on a corkboard, showing photos, article clippings, and other media connected by a red string — the sort of “evidence board” employed in thriller movies.

“Now you know who Blake Masters really is,” the ad says.

The Lamon campaign appears to be pulling from an investigative piece written by Jewish Insider in April that details an article Masters wrote for a libertarian website back in 2006.

In it, Masters argues that wars serve the interests of the political elite, using the events preceding America’s entry into World War I to make his case. Citing, in part, the work of G. Edward Griffin, an author accused of peddling antisemitic conspiracy theories (Griffin himself denies being antisemitic), Masters claims that “the U.S. hasn’t been involved in a just war in over 140 years.”

Masters, in a statement to Jewish Insider, conceded that his language on just wars went “too far” but defended his decision to cite Griffin, calling “guilt by association” a “cheap journalistic trick,” and noted he was 19 at the time he wrote the article.

According to the outlet, Masters left unaddressed why he chose to conclude his article with what he described as a “poignant quotation” from Hermann Goring, a leader of the Nazi Party condemned as a war criminal at the Nuremberg Trials in 1946.

Jewish Insider, which describes Masters as a firebrand out to “stir outrage,” mentioning in passing his reported praise of the Unabomber’s manifesto, also scrutinized a Facebook post from 2010 in which Masters apparently shared an article that calls Israel “the North Korea of the Middle East.” The candidate had told the outlet he was pro-Israel a month earlier.

Masters, at the time, framed the Jewish Insider article as part of an attempt by the “journalist class” to smear him as bigoted. He expressed much the same sentiment on Friday, accusing the Lamon campaign of adopting the tactics of the left-wing media with its new ad.

“We knew they were going to try to call me a racist and a sexist and a terrorist,” Masters said in a video posted to Twitter. “Well, it turns out, loser Republicans will do that too.”

Masters compared Lamon’s “shameless” accusations to those levied at Trump. The populist candidate has cleaved to the former president, echoing Trump’s false claims that he won the 2020 election and espousing his “America First” policy agenda.

Masters is backed by tech billionaire Peter Thiel, who is pouring more than $13 million into the Senate race. Thiel, a close ally of the former president, hopes Masters will replicate the success of another Trump-backed candidate: J.D. Vance, who won Ohio’s GOP primary in May.

Masters will face four other opponents in the Aug. 2 primary, among them Lamon, a wealthy energy executive who has previously labeled Masters a “puppet” of Big Tech for his backing from Thiel.

Arizona Attorney General Mark Brnovich is also considered a leading contender for the GOP nomination, with polling until recently showing him with a commanding lead.

The winner of the primary will face off against Democratic incumbent Mark Kelly, who won the seat of the late Sen. John McCain (R-AZ) in a special election two years ago.