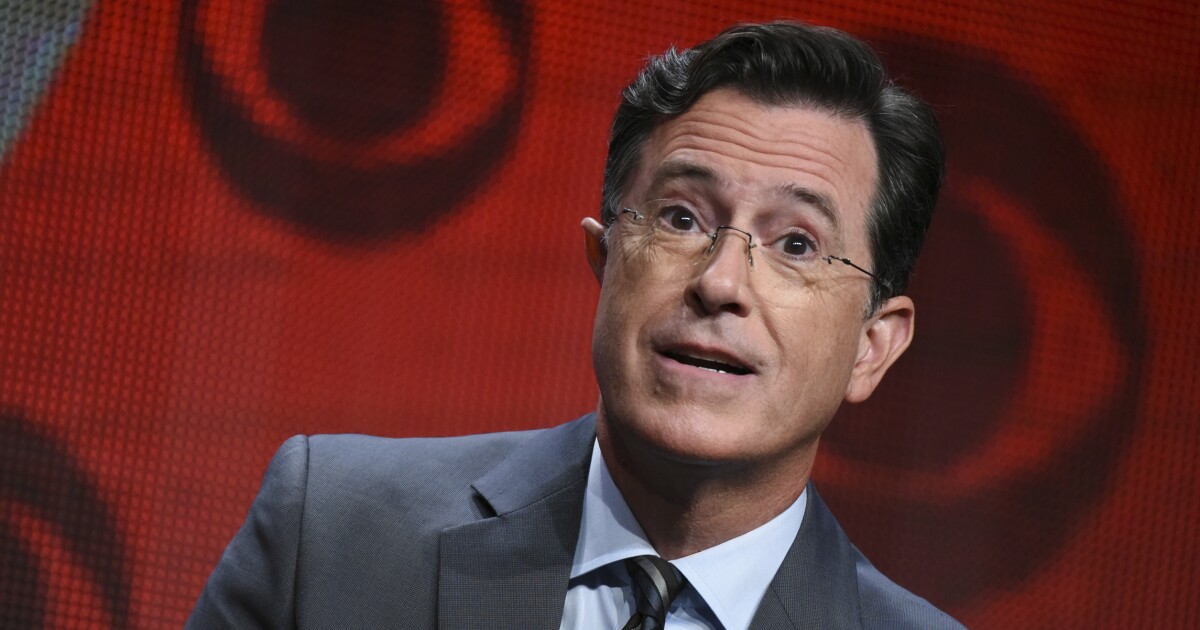 People associated with Stephen Colbert's late-night comedy show were arrested on the U.S. Capitol grounds on Thursday night, according to GOP sources.

People associated with Stephen Colbert’s late-night comedy show were arrested on the U.S. Capitol grounds on Thursday night, according to GOP sources.

Members of the group, initially on location around the time of a hearing by the Democrat-led Jan. 6 committee, were charged with unlawful entry and released after they were found in Longworth House Office Building after it closed to the public, the Washington Examiner has learned. The Capitol Police did not identify who was arrested but did acknowledge charges.

NEW: U.S. Capitol Police: “On June 16 at approximately 8:30PM, USCP received a call for a disturbance in the Longworth House Building. Responding officers observed seven individuals… in a sixth-floor hallway… They were charged with Unlawful Entry…”https://t.co/yasBIg20xS pic.twitter.com/ehyuTOuGSx

“On June 16, 2022, at approximately 8:30 p.m., U.S. Capitol Police (USCP) received a call for a disturbance in the Longworth House Office Building,” Capitol Police said in a statement obtained by the Washington Examiner. “Responding officers observed seven individuals, unescorted and without Congressional ID, in a sixth-floor hallway.”

“The building was closed to visitors, and these individuals were determined to be a part of a group that had been directed by the USCP to leave the building earlier in the day,” the statement added. “They were charged with Unlawful Entry. This is an active criminal investigation, and may result in additional criminal charges after consultation with the U.S. Attorney.”

Among those arrested and charged was Robert Smigel, known for being the voice of Triumph the Insult Comic Dog, a congressional source told Fox News.

A GOP aide referred to the situation regarding the Jan. 6 committee’s interest in Rep. Barry Loudermilk (R-GA) conducting a tour of the Capitol the day before the riot, even though the Capitol Police said there was nothing suspicious about the activities they observed, and said staffers for two Democratic congressmen let the crew into the Capitol complex.

“On the 50th Anniversary of Watergate, Democrat staffers from the offices of Adam Schiff and Jake Auchincloss got a film crew into the House Office Buildings that then went around the same buildings that Rep. Loudermilk was accused of giving ‘reconnaissance’ tours of – a claim that’s been debunked by Capitol Police,” the aide told the Washington Examiner.

“Late last night, CBS employees who work for the Colbert Show were arrested by Capitol Police for unlawful entry and spent the night in jail,” the source added. “They were not credentialed to be walking around without an escort, and they were banging on the doors of the offices of Republicans like Kevin McCarthy, Jim Jordan and Lauren Boebert as they were filming a skit on the Jan. 6 hearings – a topic the Left and woke media keep trying to use to distract the American People from issues like inflation, crime, and the border.”

The Late Show Stephen Colbert is a late-night comedy show that airs on CBS. A source familiar told the Washington Examiner that the Late Show staff were initially let into the Capitol complex on Thursday for pre-arranged interviews with members of Congress, but “overstayed their welcome.”

The interviews were with Reps. Adam Schiff (D-CA) and Stephanie Murphy (D-FL), who both serve on the Jan. 6 committee that held a hearing Thursday, as well as with Rep. Jake Auchincloss (D-MA), according to Fox News.

Rep. Rodney Davis (IN), the top Republican on the House Administration Committee, told Fox News host Jesse Watters on Friday that he “just found out about the arrests today” and vowed there would be some sort of inquiry, including into what the group was doing “without an escort.”

The congressman also referenced the Loudermilk controversy, and declared, “the only people arrested by Capitol Police for touring the House office buildings are the people who work for Stephen Colbert.”

In a letter on Monday, Capitol Police Chief Tom Manger revealed what his force found in regards to Loudermilk and the tour. “There is no evidence that Representative Loudermilk entered the U.S. Capitol with this group on January 5, 2021. We train our officers on being alert for people conducting surveillance or reconnaissance, and we do not consider any of the activities we observed as suspicious,” he wrote.

Still, the Jan. 6 committee has continued to raise the issue.

The Twitter account for the Republicans on the House Judiciary Committee shared the clip of the Fox News report, also quipping how the arrests came right around the 50th anniversary of the Watergate break-in.

Now-President Joe Biden defeated then-President Donald Trump in the 2020 election, winning 306 Electoral College votes to Trump’s 232. The Capitol riot occurred as Congress was certifying Biden’s win, and the Jan. 6 committee has worked to show ties between Trump’s efforts to overturn the results to the violence.

The Justice Department said this month that more than 840 defendants have been arrested in relation to the Capitol riot, including approximately 250 defendants charged with assaulting, resisting, or impeding law enforcement officers. Some members of the Oath Keepers and Proud Boys have been charged with “seditious conspiracy.”

Former Attorney General William Barr said over the weekend that the Jan. 6 committee “isn’t set up as the optimal mechanism for getting at the truth, and there is obviously a big political overlay.”

The committee held multiple hearings last week and this week, including highlighting testimony from Barr saying that Trump’s claims about fraud sufficient to change the outcome of the election were “bullsh*t” as he contradicted claims by Trump and his allies that the race was “stolen.” Trump retorted that Barr was “a weak and frightened Attorney General” who “sucked.”