The first steps toward election integrity and restoring our Republic.

I am a Republican committeeman for Pennsylvania’s York County Republican Party and a Heritage Sentinel and poll watcher for four elections now. I offer some thoughts here on election integrity and restoring our Republic back to the way it once was.

Being inside the polls at my precinct has a lot to do with election integrity.

One method of protecting elections is to get involved in your local county Republican Party by becoming a precinct committeeman or woman. Precinct committee people can nominate and elect candidates to run on the primary and general election ballots. You have an opportunity to be on the primary ballot as well.

You can also recruit new members to their local precinct polling places to fill empty spots. The more conservative committee people in the party, the more conservative the party becomes, and these people can elect county chairmen, which then elect the state chairmen, which elect the RNC chairmen like Ronna McDaniel. You will have the chance to become a poll worker or observer at your polling place and assure that elections are safe and secure. You will also be able to bring out voters in your area to increase voting turnout by reaching out to voters and giving them a call or sending out mail ballots. 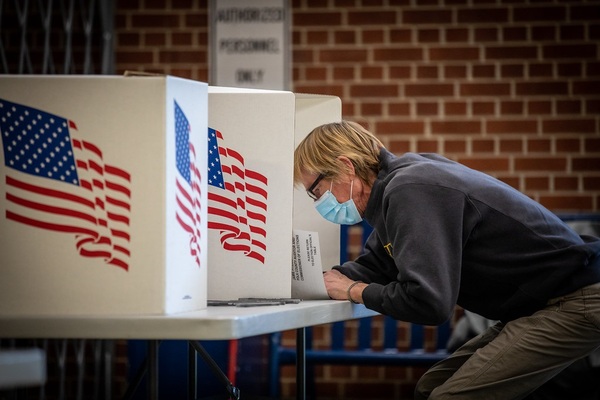 I started out as a volunteer for the Trump Victory reelection team door knocking and phone banking. This is the same way that Obama won his two elections when he ran for president. Over 2.2 million campaign volunteers canvassed and phone banked each election. I always say that the best way to beat your enemy is to learn from them and use it against them. I would suggest reading Saul Alinsky’s Rules for Radicals or Elizabeth McKenna and Hahrie Han’s Groundbreakers. How Obama’s 2.2 Million Volunteers Transformed Campaigning in America or the Dan Schultz book How To Get Into The Real Ball Game Of Politics Where You Live To Help President Trump Win.

My strategy is that I ask the local GOP to provide me with a list of all voters in my precinct with phone numbers and addresses, how often they voted in the past primary or general election, and if they are weak Republican, strong Republican, swing voter, weak Democrat, or strong Democrat. Then I make an Excel list filtering weak Republicans by focusing on the vote frequency of 0-2 voters. I create my own Get Out the Vote postcards and candidate cards and mail them out before election day to all weak voters. Then, a couple days before the election, l make personal calls to voters asking them to come out and vote.

This time, since I’m on the ballot, I’ll ask the voters to vote for me and come out to vote by emphasizing that they’ll be voting for someone different — an outsider as opposed to a career politician, to encourage a greater voter turnout. I will also print out sample ballots and deliver them to my neighborhood, informing them that there are some good candidates by circling their names or coloring in the dots for them giving them the ballot to have to take into the polls.

As for recruiting candidates, I gave a friend of mine who belongs to a PAC the list of empty and filled spots asking him to ask people in his PAC if they be interested in serving on the precinct committee and encouraging them to get in contact with me.

Finally, every conservative person should know and study the Declaration of Independence and the Constitution. Pass copies on to friends and family members and talk with other people about conservative values and issues. If people don’t understand or know our values, they won’t ever be brought over to the right side.