Douglas Murray’s The War on the West chronicles the gradual emergence and sudden rise to dominance of the pseudo-intellectual anti-white racism that now saturates our culture. No longer confined to the fringes, this bigotry has been lent considerable credibility as it mounts a broad-based attack on virtually every aspect of the Western heritage. Western culture — in spite of its eradication of slavery and its vastly expanded panoply of individual rights — stands condemned as thoroughly and irredeemably racist.

Murray does the reader a service in reluctantly assuming the burden of presenting this phenomenon in all its excruciating ugliness and blinkered stupidity. He also draws out its troubling implications and threatening trajectory. The moral sanctimony of the avowed racists whose teachings Murray opposes is among the most galling aspects of the trend he examines; our would-be conscientious educators appear as a motley band of ill-informed and overcelebrated frauds selling their petty defamations as cheap substitutes for moral insight. One cannot help but marvel at how low we have sunk as a culture to have placed such demented hacks in positions of elite influence and public authority.

“Whiteness” as these feted blowhards portray it, is practically a plague upon humanity, and all “white” accomplishments must be laid low, since these ultimately testify to black and brown deprivation. The charge of “cultural appropriation” leveled against the West is especially disingenuous, as Murray points out, since the West has traditionally exhibited a willingness to benefit from the innovations and accomplishments of other cultures. Today’s moral scolds express anger and indignation that the West had not shut itself off from all outside cultural influences — a bizarre demand to make of a culture now deemed entirely too “white.” But then, bigotry needn’t be coherent to work; it need only dump hatred on its intended target.

Murray proposes we are presently in a state of “politeness,” by which he means those on the receiving end of the grand hateful accusation have (up to now) refrained from pushing back at their accusers, and Murray is right to assert that this peculiar, quasimasochistic posture on the part of the targets of anti-white racism is unsustainable. If this is a period of “politeness,” this is also a period of continual blatant provocation. What is to be made of this?

In the United States it is the Democratic Party (and its affiliates) that is the chief promoter of anti-white racism. Perhaps the political construct of “whiteness” and its virtual synonym “white supremacy” has been embraced because it’s useful in focusing collective hatred and serves to unify all those that do not find themselves identified with the hated group. A villain painted so broadly may also be used to legitimate sweeping revolutionary opposition to absolutely anything that is identified as “white” or “racist.”

Anti-white racism is not only promoted as a racial entitlement, it is sold as a broad and sweeping moral imperative. But it’s nothing of the sort; it’s just another political weapon in the arsenal of leftist demagogues, and it works best when the designated racial enemy remains passive and polite. 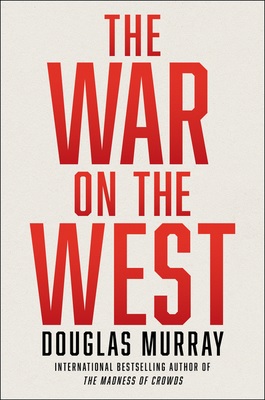 A fixation on revenge hardly seems like a productive way to organize a society, but under the guidance of the Democratic Party, it would seem, hatred and contempt for white people is to be the new unifying principle of the United States. We are, it seems, to be a nation newly united as a vast array of vengeful minorities called upon to lament the nation’s founding (in 1619) as an act of injustice, indict its Founders and subsequent stewards as white racists, and vilify and punish all who may be identified as the distant descendents of the original criminals. The new American mission is to be one of perpetual racial retaliation against whites.

Enough. A drug-abusing criminal died while in police custody in a truly disturbing scene captured on video several years ago. This unfortunate and regrettable incident enabled a band of Leftist grifters to soak gullible corporations and individuals for donations that were then used to purchase several million-dollar properties in exclusively white upscale neighborhoods for the sole benefit of the con artists running the grift, while the very people whose interests BLM claimed to represent languished in unalloyed poverty and neglect. The killing that launched this grift did not constitute evidence of “systemic racism;” it did not justify months of riots; it did not warrant a wholesale condemnation of all police, or all white people, or the entire West. Isolated incidents like this should be treated as such, but they are instead lit up like gasoline to drive the sick little revenge fantasies of unhinged political activists. The level of journalistic irresponsibility underlying all this is simply astounding; the national press has debased itself into little more than a megaphone for petty defamations and political hit jobs and welcomes almost every opportunity to engage in racial incitement.

That is to say, almost. When an illegal immigrant commits an especially foul murder, the public is solemnly urged to withhold judgment, to refrain from generalizing; we are endlessly reminded of how wonderful the “undocumented” community is as a whole. When a horrific crime is committed by a U.S. citizen using a firearm – no matter what the circumstances (and often before these are even known) — the press immediately calls for gun control and effectively treats every gun owner as an accessory to the crime. When a mentally unbalanced black or brown perpetrator espousing anti-white and anti-Asian race hatred commits mass murder, the media response is a day or two of mumbled acknowledgement quickly trailing off into incurable amnesia. When a mentally unbalanced white individual commits a racially motivated murder, the media response is a veritable festival of glee. The crime is relentlessly spot lit and no effort is spared to tar the Left’s political adversaries with guilt by association. We are continually subjected to a circus of reckless advocacy that deliberately distorts events, demonizes the innocent, and divides the nation. And these distortions themselves constitute provocations.

For the assigned targets of anti-white race hatred, two choices suggest themselves. One choice is to “rally ’round the race,” so to speak — to adopt a posture of racial defensiveness and belligerence rivaling that which the avowed adversaries of “whiteness” display on behalf their own perspective, but inverted from racial accusation into racial advocacy. Opting for this alternative would be every bit as stupid and shortsighted as is the ongoing celebration of those petty bigots whose mediocre musings constitute the tissue-thin support for the presently approved racism.

Another choice for those that wish to resist the racists is to firmly and without compromise reject the racists — and that means all of them — not just the ones that vilify our own, but also those who would flatter our own by dishonestly portraying themselves as our most loyal advocates. This is what our heritage demands of us, both as Americans and as heirs to the West. The baffling rise of celebrity racists is a challenge that must be faced, and it is best met not with superficial mimicry, but with fundamental rejection. We who would disempower malignant charlatans must resolve to rededicate ourselves to the tradition of classical liberal individualism that stands not just as a singular Western achievement, but as an antidote to all varieties of toxic racial solidarity and collective hatred.

The ugliness Murray documents in The War on the West deserves to be mercilessly exposed and unceremoniously rejected; it deserves to be driven back to the academic and cultural fringe where it, along with its warped little partisans, can be left to rot. We deserve better than this; the nation deserves better than this. We deserve (and should demand) a deracialized politics. And the political force pushing racism (the Democratic Party) deserves nothing less than an historic, humiliating, and debilitating electoral defeat in November — a defeat so devastating as to perhaps prompt it, at long last, to purge itself of the racist attitudes that have effectively turned it into an engine of anti-civilizational hatred.