The biggest deception China has successfully perpetuated in the West is that it would rise peacefully, gradually liberalize and present enormous business opportunities.

The biggest deception China has successfully perpetuated in the West is that it would rise peacefully, gradually liberalize and present enormous business opportunities. Behind that veneer of reform, Beijing has played a masterful influence game, ensnaring governments, academia, think tanks, cultural groups, and businesses in the West to further its goal of global preeminence. 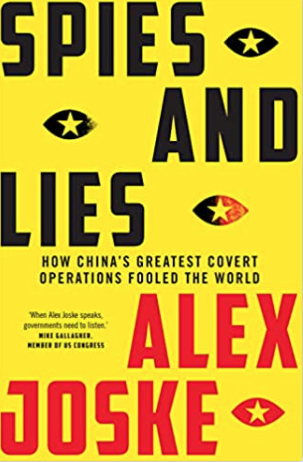 cloak-and-dagger ops alone to a sophisticated collection of innocent-seeming front groups. He shows how these groups, speaking the language of transparency, globalism, and cultural, academic, and business exchanges, influenced key persons in every sphere of endeavor in the West, masking China’s quest for world dominance, its military build-up, its stealing of technology, its human rights violations, and its territorial expansionism. Appearing eager for cultural and business reciprocity, China presented intelligence operatives as journalists, scholars, and trade and tourism representatives. The U.S. – and other western governments – engaged with China, mistaking it for a useful partner, and often acting under pressure from businesses that sought lucrative deals with Beijing.

According to the book, billionaire George Soros, who is still in quixotic and dangerous pursuit of his flawed notion of an ‘open society,’ was one of China’s earliest dupes. Chinese intelligence and its numerous fronts used Soros and his funds as an entrée to the West, creating what has grown into a omnipresent cloud of influence, ubiquitous yet impossible to pinpoint and hence combat or dislodge. But more on Soros later.

The focus of MSS’s elite influence operations is on inveigling targets into promoting narratives of China’s choice, often making them believe they are being welcomed into the inner sanctum of the Chinese Communist Party (CCP) – a route to proprietary access and mutually beneficial networks. In this the MSS draws on the party’s united front work tradition, which harks to the revolution. At that time, the party’s United Front Work Department (UFWD) sought to gain influence beyond party members, using networks to suppress dissent, indoctrinate those sympathetic to the cause, find and train leaders, and so on. Later, the same methods were deployed abroad, providing networks, covers, and institutions for furthering the party’s purposes.

Lulled into a false sense of security, many elites chose to cooperate with Beijing, underplaying all its atrocities, espionage, and aggression, and hoping perhaps that China, welcomed into the sphere of western nations, would reform. But the Chinese leadership, especially current president Xi Jinping, has always been clear on what it wants: global dominance, utter loyalty to the CCP, military victory, and weakening of rivals.

Joske’s book is based on open-source documentation and interviews with former intelligence operatives and experts. He himself has been at the receiving end of intimidatory united front activity. When his articles critical of China started appearing, he was followed around by Chinese student groups that accused him of racism. Indeed, a university alumni association is among the many fronts he names, with documentary proof, as being controlled by the MSS. Here’s a partial list: four publishing houses, a Japanese magazine, a well-known think tank, an arts troupe, an international travel agency, a film production company, a California bookstore, a calligraphy competition, and countless international conferences.

After the Tiananmen Square massacre and the collapse of the Soviet Union, the CCP decided to both check the entry of western ideals into China and infiltrate foreign powers. The MSS began small, by monitoring and mobilizing Chinese communities abroad. But by 2000, it understood how the U.S. foreign policy system worked, and realized the benefit of focusing on targets who would escape the concern of the intelligence community – scholars, policy wonks, retired officials, business leaders and the like. So, MSS agents took on these very roles to mingle with American counterparts and influence them, and through them up-and-coming American politicians. Using this cadre, posing in the West as liberal reformists, Chinese intelligence struck at unprotected parts of the U.S. democratic system.

Having learned of the role and status of American think tanks – particularly the Carnegie Endowment for International Peace and the Rand Corporation – and how they can provide connections to government, the bureaucracy, civil society, and academia, the MSS used them as a fertile arena of its influence operations. Many Chinese agents have held positions as visiting scholars and policy experts and used those positions to open doors, make introductions, gather intelligence in diverse venues, and push exactly the narrative the CCP chooses.

The MSS is keen on getting involved with politicians early in their careers for the advantages this will offer when they advance to higher office. Bribery and honeypot operations are par for the course. For example, California Congressman Eric Swalwell was targeted for an affair by Christine Fang, an attractive young MSS operative, when he was a city councilor. When he bid for a Congress seat, winning against a well-established incumbent, he received significant fundraising assistance from Fang. She also funded his re-election campaign. She arranged for an associate to intern at his office, and advantageously for the MSS, Swalwell was in 2015 appointed to the House Intelligence Committee that oversees the CIA.

The turning of Soros, however, is perhaps the most interesting example of the MSS’s early successes, hinging on a fortuitous act of the billionaire. This was in 1984, when China was cash-strapped and desperately needed foreign investment even for basic development. Its intelligence operations then were poorly funded. (Now, they are run by some of China’s largest business empires.) Soros happened to read Liang Heng’s Son of the Revolution, a bestselling account of China’s reopening to the West. Inspired by a vision of a liberalized China, he contacted Liang and ventured forth with a China Fund, aimed at transforming the country along the lines of his ‘open society’ philosophy. Liang set up an office in Beijing for the new entity, seemingly with the support of CCP officials who had liberal, reformist ideas.

But the MSS was there right from the beginning. Liang was sidelined, and eventually, the fund was directed to work with the China International Culture Exchange Center (CICEC). Its head Yu Enguang was made the fund’s co-chair. Far from being a cultural institution, the CICEC was a division of the MSS and meant to gain the trust of people like Soros while posing as liberals within the party. There were artists, poets, scientists, a future CCP leader, a clergyman, victims of the Cultural Revolution and so on. In fact, these were trusted MSS assets, adept at projecting the image of an open, reforming China, to attract foreign interest and investments.

And Yu Enguang was in fact a high-ranking operative of the MSS’s 12th Bureau, a special spy unit whose official mission was to protect China from external threats and lay the groundwork for influence ops worldwide. The book claims that a secretive vice-minister in the MSS called Yu Fang looks exactly like Yu Enguang, who, through the 1970s and 1980s had posed as a journalist, heading Xinhua bureaus in London and Washington D.C. All the while he had run an entire bureau of MSS spies. Fang/Enguang had framed laws codifying the MSS’s powers and overseeing propaganda, censorship, and the rewriting of history. He also established the practice of direct engagement with targets like Soros, a practice that has since grown into a huge, well-funded worldwide operation – one that free democracies, including the U.S., are unfortunately blind to.

Joske ends his book warning the West to recognize united front activity for what it. He says it’s also important to stop viewing “open source” intelligence gathering, that is, the kind obtained through interaction with scholars, policy experts, business leaders, etc., as inconsequential as compared to blatant stealing of classified information. The MSS is everywhere now, and the earlier free democracies wake up, the better.