Incessant killings of Egyptian Christians by Muslims are no accident.

How the Koran Calls for the Murder of Christians – American Thinker<!—->

On April 7, 2022, in Egypt, a Muslim man lunged at and viciously stabbed a Christian priest thrice in the neck with a knife; Fr. Arsenius Wadid died soon thereafter.  Although the murderer was instantly apprehended by passersby — the crime was committed on a crowded street — Egyptian authorities initially tried to do what their Western counterparts often do: portray the murderer as “insane,” an aberration of society.

Due to a combination of public outcry (primarily from the Copts themselves), the testimonials of seventeen eyewitnesses, and even the murderer’s own coherent responses — to say nothing of the fact that of all the people he could have “randomly” murdered he targeted the one openly professing his Christian faith by wearing a large crucifix around his neck — prosecution finally confirmed that he would be tried as sane and cognizant of his actions.

Why both Westerners and non-Westerners constantly seek to portray Muslim murderers of non-Muslims as “insane” should be clear by now: the alternative — that Islam somehow promotes such behavior — would open a massive can of worms that no one wants to deal with.

But can one really say that Islam promotes even the unprovoked slaying of a Christian clergyman, Fr. Arsenius, who was peacefully engaged in a public charitable activity with the youth of his church when he was slaughtered?

Three Koran passages would seem to answer this question in the affirmative: 1. “Kill the polytheists wherever you find them (9:5); 2. “Fight the leaders of disbelief [kufr] (9:12); 3. “When you meet the disbelievers, strike [with your blades at their] necks (47:4).

Consider how these three verses apply to the current case: A Muslim man comes across a “leader of disbelief” — that is, a clergyman, a visible representative of Christianity, as demarcated by the cross around Fr. Arsenius’s neck.  It did not matter that he came across him on an open and crowded street, since Allah also commands the believers to “kill the polytheists” — and Islam categorizes Christians as polytheists due to the Trinity — “wherever you find them.”  Finally, the murderer took his deity’s advice by striking directly at the neck, the jugular, which he repeatedly stabbed with a knife.

Should this rather straightforward interpretation still seem farfetched or not “nuanced” enough, keep in mind that Muslims recite the aforementioned three and many more hate-filled and violent Koran verses every single day; these scriptures are highlighted, praised, and expounded in countless books, on countless televised programs, and all throughout the mosques of the world, especially Egypt’s.  In other words, these verses are ingrained in the minds of pious, observant Muslims.

Even so, one may object that, if such verses are so influential, why aren’t there more such attacks?  Such an observation can only be made by someone whose information is exclusively derived from “mainstream media” sources: random attacks on “infidels” are actually quite common — not a few of them featuring knife stabs to the neck.

In Egypt alone — where a Coptic clergyman once complained that attacks on Christians happen “every two or three days” — a murder nearly identical to that of Fr. Arsenius took place in 2017: then, a Muslim man wielding a butcher’s knife was seen and videotaped chasing a Coptic bishop in broad daylight; when he finally cornered him, the Muslim repeatedly stabbed the Christian in his neck and head, murdering him.  Finally, to underscore that his handiwork was religiously (Islamicly) motivated, the murderer used the bishop’s own blood to draw a cross on his forehead. 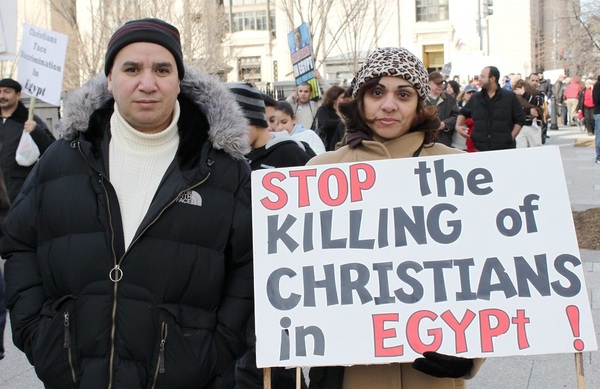 Further confirming that this killer was motivated by Koran verses such as those cited above, neighbors said that he had recently “begun praying in the street, shouting loudly and calling Christians infidels.”  As for motive, one report explained that “he had decided to kill any Coptic priest, purchased a dagger, and lay in wait for one to pass by, in a street leading to the local church.”

“Lay in wait for one to pass by” sounds awfully similar to Koran 9:5, which counsels the faithful to “capture them, besiege them, and lie in wait for them on every way.”

There are other such examples.  In 2013, Coptic priest Mina Cheroubim was shot dead as he left his church in al-Arish, Egypt.  A botched attempt occurred in 2020: while traveling to his church in Alexandria, a Coptic priest was ambushed and “nearly murdered” by a Muslim parolee. According to the report, “the parolee, nicknamed Kareem Madi, has a history of attacking Christians — especially women and girls.”

Such murderous assaults are hardly limited to Coptic clergymen who, as the saying goes, wear their faith on their sleeves.  Everyday Christians are also targeted and killed in what Egyptian media present as “random attacks” (with the only constant being the religion of the murderers, Islam, and the religion of their victims, Christianity).

As just two examples, in 2020 a Muslim man crept up behind a Christian woman walking home with groceries, grabbed her hair, pulled her head back, and slit her throat with a knife.  Two days later, another Muslim man went for the jugular of a Christian man with a box-cutter; he only managed to sever an ear.  On being questioned concerning his motive, this Muslim confessed that he did not know the Copt, but that he simply “hates Christians.” There are many more such examples from Egypt; see here, here, here, here, here, here, and here.

The reader may still protest: if the Koran teaches the outright butchery of infidels, “wherever you find them,” and if at least ten percent of Egypt’s population is Christian, shouldn’t there be many more — indeed, daily — murders?  The answer to this seeming conundrum is simple enough.  Though the Egyptian constitution is heavily based on Islamic sharia law, Egypt is still a modern state — meaning that the random killing of an “infidel” is strictly prohibited.  As such, it appears that only the most pious — or as they are often portrayed, the most insane — are willing to accept the negative consequences of literally enacting the hate-filled and violent verses of their holy book, which include long or even life prison sentences.

That said, such killings would certainly be much more frequent — especially following Friday mosque prayers, when the believers are regularly riled against the hated “infidels” — were they not outlawed and punished by the state.

Raymond Ibrahim, author of the new book, Defenders of the West: The Christian Heroes Who Stood Against Islam, is a Shillman Fellow at the David Horowitz Freedom Center, a Judith Rosen Friedman Fellow at the Middle East Forum, and a Distinguished Senior Fellow at the Gatestone Institute.