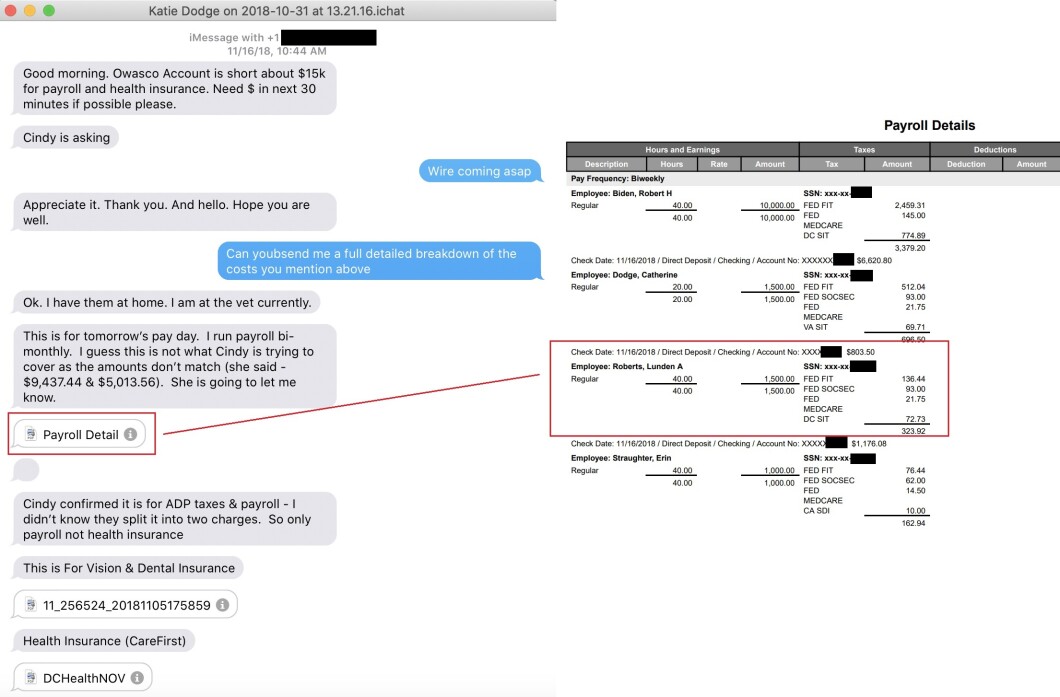 EXCLUSIVE — Hunter Biden paid a full-time salary to the exotic dancer with whom he fathered a child in 2018, according to deleted payroll files recovered from a copy of his abandoned laptop.

EXCLUSIVE — Hunter Biden paid a full-time salary to the exotic dancer with whom he fathered a child in 2018, according to deleted payroll files recovered from a copy of his abandoned laptop.

Lunden Roberts earned $1,500 for 40 hours of work from Biden’s company, Owasco PC, on Nov. 16, 2018, according to a recovered payroll file obtained exclusively by Washington Examiner. Two other recovered files show Owasco spent an additional $521.37 to provide health, dental, and vision insurance coverage for Roberts for the same month.

Roberts sued Biden in Arkansas for child support in 2019. She disclosed in court filings that his company paid her from May 2018 through November 2018, but the specific amounts were not publicly disclosed. Roberts added in the filing that “she never received a tax payment for these payments.”

In the recovered files, Biden expressed shock that his company was doling out payments to Roberts after his assistant, Katie Dodge, texted him the records. He then ordered Dodge to “take Lunden off payroll.”

Biden severed Roberts from his company’s payroll less than three months after she gave birth to his fourth child, Navy Joan Roberts, on Aug. 28, 2018.

“And is Lunden still [on] payroll???” Biden texted Dodge on Nov. 16, 2018. “Take Lunden off payroll I thought you said she decidedly [didn’t] want to work and didn’t need health insurance anyway. Remember that conversation?”

Dodge said she couldn’t remember that particular conversation, but she said she did remember being disappointed with Biden over his payments to Roberts.

“I remember a conversation where I was disappointed that you wanted to pay her the same rate as me,” Dodge said. “But I am over that. Maybe she told you that but I wasn’t involved.”

“Well take whatever I pay Lunden and get my s*** straightened out Katie,” Biden added. “We need to completely abandon this old process and come [up] with a new one. New accounts new record keeping new everything.”

CEFC wired the funds to Hudson about two months after Biden signed a $1 million attorney engagement letter to represent Patrick Ho, the deputy of CEFC’s chairman at the time, Ye Jianming.

Ho was eventually sentenced to three years in prison in March 2019 for violating the Foreign Corrupt Practices Act and was deported to Hong Kong in June 2021 after serving his sentence. Ye has since disappeared in China after being named by state media in a 2018 corruption case. China allowed CEFC to go bankrupt.

An Arkansas judge ruled in January 2019 that a DNA paternity test proved Biden was the father of Roberts’s child.

Biden and Roberts settled the child support case in March 2020. Biden agreed to pay an undisclosed monthly amount of child support and health insurance premiums, according to Courthouse News.

Other texts found on the copy of the laptop show Roberts was met with silence when she tried reaching out to him in the weeks before their baby was born.

Roberts is mentioned in just one email on the laptop copy.

The manager of the House of Sweden, Biden’s Washington, D.C., office building, accused him in a September 2017 email of violating building rules by sneaking Roberts in through the building’s side doors after business hours.

Biden was incensed at the accusation. He responded to the manager in a previously reported lengthy email explaining that Roberts was his daughter Maisy’s “basketball mentor.”

“I had phoned ahead to let security know that my youngest daughter’s basketball mentor she worked out with Maisy and Sasha Obama when they played in rec league together,” Biden said. “Maisy, my daughter continues [to] pursue a NCAA Div. One team and Lunden continues to help. [Lunden] Roberts. Here is a partial bio.”

Biden sent the email just one day after he had requested that the same manager create keys for his “office mates” — his father, Joe Biden, his mother, Jill Biden, his uncle, Jim Biden, and Gongwen Dong, the “emissary” of then-CEFC Chairman Ye.

Hunter Biden claimed to not remember ever having sex with Roberts in his 2021 memoir, Beautiful Things, in which he attempted to distance himself from her and his daughter.

Hunter Biden was married to Kathleen Biden from 1993 until their divorce in 2017, and their three daughters, Naomi, Finnegan, and Maisy, are featured in the memoir. He has since remarried South African filmmaker Melissa Cohen. The two had a son, Beau, named after Hunter Biden’s deceased brother, in March 2020.

“I’m not proud of it,” he wrote of his dalliance with Roberts in his memoir. “It’s why I would later challenge in court the woman from Arkansas who had a baby in 2018 and claimed the child was mine — I had no recollection of our encounter. That’s how little connection I had with anyone.”

Hunter Biden’s attorneys, Chris Clark and George Mesires, did not return a request for comment.