Buckle up for a rough economic ride.

What about a new type of hurricane? Not rain and wind, but an economic hurricane of stagflation, a toxic combination of high inflation and stagnant economic growth. This hurricane is so miserable that a term was coined to measure the misery, aptly named the misery index, the sum of the inflation and unemployment rates.

The misery index is currently in double digits, near 12, and if economic malaise continues, expect this number to creep closer to 20, territory last seen during the Jimmy Carter presidency, the last time both the misery index and malaise were commonly discussed.

True hurricanes are forecast by meteorologists, although amateurs such as Al Gore, Greta Thunberg, and Prince Charles, often opine on upcoming climate change catastrophes. Economic hurricane predictions are best left to those with a far deeper understanding of business and the economy than Al or Greta have of the weather or climate.

One such expert is Jamie Dimon, CEO of JP Morgan Chase, the largest U.S. bank. At a recent financial conference, he warned, “You know, I said there’s storm clouds but I’m going to change it … it’s a hurricane.”

He went on with his economic hurricane forecast, “Right now, it’s kind of sunny, things are doing fine, everyone thinks the Fed can handle this. That hurricane is right out there, down the road, coming our way.” 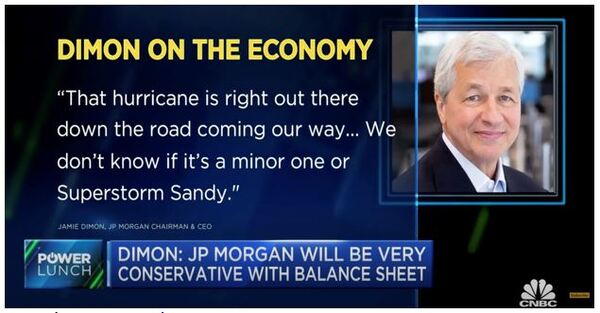 Another business titan, Elon Musk, echoed Dimon’s hurricane forecast. Just as animals are able to sense an incoming storm or tsunami, Musk has a similar premonition about an upcoming economic hurricane. Musk has a “super bad feeling” about the economy. He emailed Tesla executives to “pause all hiring worldwide,” and instead plan on cutting 10 percent of the Tesla workforce.

A third economic mogul weighed in, although not with a weather analogy. Goldman Sachs’s President John Waldron observed:

This is among – if not the most – complex, dynamic environments I’ve ever seen in my career. The confluence of the number of shocks to the system to me is unprecedented. We expect there’s going to be tougher economic times ahead.

It’s clear that America is heading toward an economic hurricane. Do others recognize this, aside from the three commenting above? Does the media notice, or are they too busy reporting on COVID cases as if it’s still 2020?

Average Americans certainly recognize the coming economic storm. Anyone who drives a gasoline powered vehicle knows the pain of filling up the tank. Gas prices hit another record high of $4.71 a gallon with seven states topping $5.00 a gallon. Biden’s response is that gas and food prices are “not likely” to come down anytime soon because there is a lot “going on right now.” There’s always a lot going on. He was elected to manage it.

When Joe Biden was elected on Nov. 3, 2020, gas prices were only $2.12 a gallon. They already hit $3.57 a gallon when Russia invaded Ukraine, throwing water on Biden’s bid to blame Russian President Vladimir Putin for the soaring gas prices. As the Biden-faced stickers pasted on gas pumps nationwide acknowledge, “I did that,” so Biden blaming Trump or Putin for the more than doubling of gas prices on his watch is disingenuous.

One California gas station is charging nearly $10 for a gallon of gas. What happens when this spreads across the rest of the country?

It’s not only gasoline, but energy costs in general. As CNN reluctantly acknowledged, “The world is grappling with gravity-defying energy price spikes on everything from gasoline and natural gas to coal. Some fear this may just be the beginning.”

One of CNN’s experts, the secretary general of the International Energy Forum went back to the weather analogies, “We have a serious problem around the world that I think policymakers are just waking up to. It’s kind of a perfect storm.”

Aside from energy, another staple is food. As PJ Media reported, “Grocery store and supermarket purchases rose 10.8% year over year in April. The USDA’s forecast for May predicts the cost of food will increase again and significantly by fall.” They warned Americans to get ready for $1 eggs.

Hormel Foods Corporation CEO Jim Snee warned of “large supply gaps,” an economic euphemism for shortages. Think of the recent shortage of baby formula with America having to fly in supplies from Europe, which only supplied a few days of America’s need for formula.

Wheat production will also be down. As Fox Business noted, “U.S. wheat crop hurt by dry winter and spring’s heavy rain.” The weather isn’t Biden’s fault, but goading Russia into invading Ukraine over NATO expansion threats is Biden’s doing, and the war has slashed worldwide food production, “The United Nations has said that the war’s impact on grains, oils, fuel and fertilizer could result in severe hunger for millions of people.”

Americans have lost faith. Economic confidence fell to 87.7 in this month’s Rasmussen Reports Economic Index, more than 20 points lower than April. “May’s decline reverses two consecutive months of gains. The index is now at its lowest point in eight years.”

Gallup’s economic confidence measure confirms the above. While positive during the last administration, it dropped in 2020, never to return to positive territory. It currently fell from minus 39 to minus 45, “The lowest reading in Gallup’s trend during the coronavirus pandemic, and likely the lowest confidence has been since the tail end of the Great Recession in early 2009.”

Does the supposed voice of reason, the calming Scranton Kid, compared to the loud-mouth tweeter from Queens who he replaced, have words to soothe anxious Americans?

Fat chance. Last week Biden said he’s not “aware” of any “immediate action” that would reduce food and fuel prices. Jimmy Carter could not have said it better.

The economic hurricane is coming. Buckle up for a rough ride.