The current crowd of abortion enthusiasts denouncing pregnancy care centers aren't able to articulate the reason for their rage.

If They Had Any Idea What Pregnancy Centers Do, Would They Still Attack Us? – American Thinker<!—->

Like the mobs of arsonists, thugs, and police haters of two summers ago, the current crowd of abortion fanatics denouncing pregnancy care centers aren’t able to articulate the reason for their rage.

There are at least 2,500 pregnancy care centers (PCCs) across the country. In the past week several have been vandalized. The Southeast Portland Pregnancy Resource Center in Portland, Oregon was vandalized with “F*** CPCs” (Crisis Pregnancy Centers) painted on walls, and CareNet of Maryland was also vandalized with graffiti.  A Molotov cocktail was thrown into the Oregon Right to Life office and the words “If abortion isn’t safe you aren’t either” painted on the building. There was an arson attack at Wisconsin Family Action, and other centers in Manassas, Virginia, and Austin and Denton, Texas were also attacked.

For the past ten years I’ve helped out with a pregnancy care center on Long Island, Women First Pregnancy Options. The range of help and resources we offer to pregnant women and the love and compassion I’ve seen extended is never mentioned in pro-abortion media.

Unlike Planned Parenthood and other abortion centers, PCCs are always free.  The Planned Parenthood near the PCC I help out at charges an astounding $140 for a pregnancy test — this I know from young women who’ve come to us for a free test after checking with PP.  (These tests are about $20 at neighborhood pharmacies.) After a positive pregnancy test, we talk to the young mom about her situation. Some are thrilled to be pregnant.  For the many who are not, we invite them to share their home life, boyfriend or husband status, school and/or work, any support as opposed to any pressure to abort surrounding her.  We show fetal models at the stage of pregnancy the mother is at.  Many are surprised to learn that the unborn baby has a heartbeat by 24 days and brain waves by the 43rd day. We want them to know the truth, that she is already a mom, her baby is already a boy or girl, and that the baby has its own DNA and blood type. We discuss any faith background and how they believe God views her pregnancy.

What we explore at PCCs for an abortion-minded woman is the factors that are leading her to believe an abortion is the best choice in her situation. Why do abortion activists resent that? Abortion providers routinely talk about choice, while ironically the only choice they promote is the one they profit from.  When a young mom or couple ask me, “Why are you guys free?” I explain that we want them to know that were not making a dollar regardless of whether they choose life or choose abortion.  We want them to have the entire truth and know that there’s no profit motive whatsoever.

Seeing an ultrasound is crucial for an overwhelmed pregnant mom.  In fact, it’s so crucial that most abortion providers refuse to show it.  I’ve had quite a few women tell me that Planned Parenthood actually turned the ultrasound screen away from them so they couldn’t see her own child moving. When the mother said, “Can you turn the screen towards me? I can’t see it!” the response was, “That’s not our policy.” These ultrasounds are done merely for the abortionist’s purpose — to see how much “work” is involved in ending the baby’s life and therefore how much money they’ll charge. Abortionists know that ultrasound is the proof of the unborn baby’s humanity, and that a woman who views her ultrasound is more likely to keep her child.  In fact, even a mom who is very vulnerable to the abortion sell and is sure she must abort — she’s in high school, has no family support, boyfriend is pressuring her to abort, has no job etc. — when she sees her ultrasound, she’s 80% likely to change her mind. The natural maternal instinct kicks in. No one can lie to her after that and say “it’s just a blob, and we can help you take care of your little problem.” She just saw her baby’s heart beating and little hands and feet moving.

Pregnancy care centers also explain the serious ramifications of choosing abortion. We want them to know that their risk of future miscarriage rises after an abortion. Other physical risks include perforated uterus, hemorrhaging, etc.  Their risk of breast cancer rises. Most relationships in which an abortion takes place end. Some young girls feel if they have the abortion, they’ll save the relationship.  That often isn’t the case.  We want them to know that post-abortion syndrome is real — and can include severe depression, future relationship problems, grief, substance abuse, even a 6x greater suicide risk.  We refer them to testimonial videos to contradict the thinking that, “if I just have this abortion, everything will be the same as it was before.” 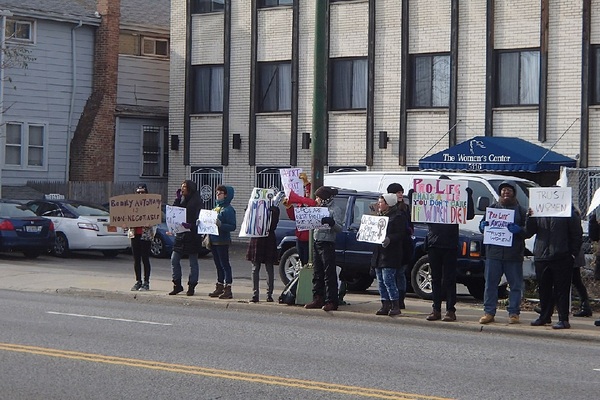 Then we share the positives of having a baby and the support available to her. We can provide maternity clothes, cribs, car seats, baby clothes, diapers, and more until the child is two years old, all free. Handmade baby blankets are constantly brought in to our center by loving donors, as well as cases of diapers and wipes, bassinets, strollers, formula, and more.  We help her consider work or school situations where day care is offered; family members including the father’s family or friends who would be willing to help with child care, college scholarships for single moms, a far healthier mindset over the abortion choice. We help her consider how she will feel about choosing abortion versus life five years down the road.  We share that an unwed couple who have a baby are more likely to go on and get married than those who abort their child.  We encourage breast feeding for the best nutrition, bonding, and budget reasons.

I’ve seen my coworkers at our four centers take a client for a free ultrasound, sit and talk with her and her boyfriend, drop off prenatal vitamins and maternity clothes at her home, hold baby showers, even be in the delivery room when the baby is born.  Several coworkers have been chosen as a baby’s godparent, and a number of them are still in touch with clients who chose life years later, receiving updated photos and sending birthday cards. Last week my coworker Meg spoke with a client for four hours at DDS about getting her health insurance, and two days later brought the same mom to a local maternity home on inquire about staying there away from family pressure to have an abortion.

Adoption is something else that pro-abortion enthusiasts have no reason to be furious about.  Unlike abortion centers, we want women in unplanned pregnancies to know how many thousands of couples are waiting to adopt.  We regularly receive calls and letters from such couples, offering to pay any and all expenses.  As an adoptive mom myself, I share that every April my family celebrates my now 22-year-old son’s ‘adoption day,’ being sure to emphasize our gratitude to his birth mother, who out of love offered him to a family who was able to provide the kid of life she wanted for him. Women who choose adoption can go on with their lives knowing they made the very best of an unplanned situation, rose to the occasion, made a selfless and heroic decision. They can choose to be in contact with the adoptive family.  While not always an easy decision, they do not suffer the emotional, spiritual, and physical ramifications of abortion.  We encourage our clients considering adoption to visit www.BraveLove.org.

Lila Rose, founder and president of Live Action, stated, “Anti-life activists don’t want pregnant women to have options. They want to scare not only pro-life workers but women seeking alternatives to abortion and support for their babies.”

“We won’t stand down,” Rose said. “Our peaceful, loving movement will continue to help women and families in need, educate them about the violence of abortion, advocate for pro-life laws, and stand for life. Please pray for the safety of all pregnancy resource center workers, volunteers, and patients.”

The reaction to threats of mass disruption and vandalism of pregnancy care centers has been strong, including a pro bono law firm vowing to defend religious liberty.  “The Thomas More Society stands ready to take legal action to defend the rights of religious believers to the free exercise of their religion as guaranteed by the United States Constitution and federal law.”

At the pregnancy resource center where I help out, we’re keeping our doors locked and have installed panic buttons under the desks because of misdirected rage from abortion activists. Those of us in pro-life ministry are asking if they had any idea all we do to help pregnant women, would they still hate us?