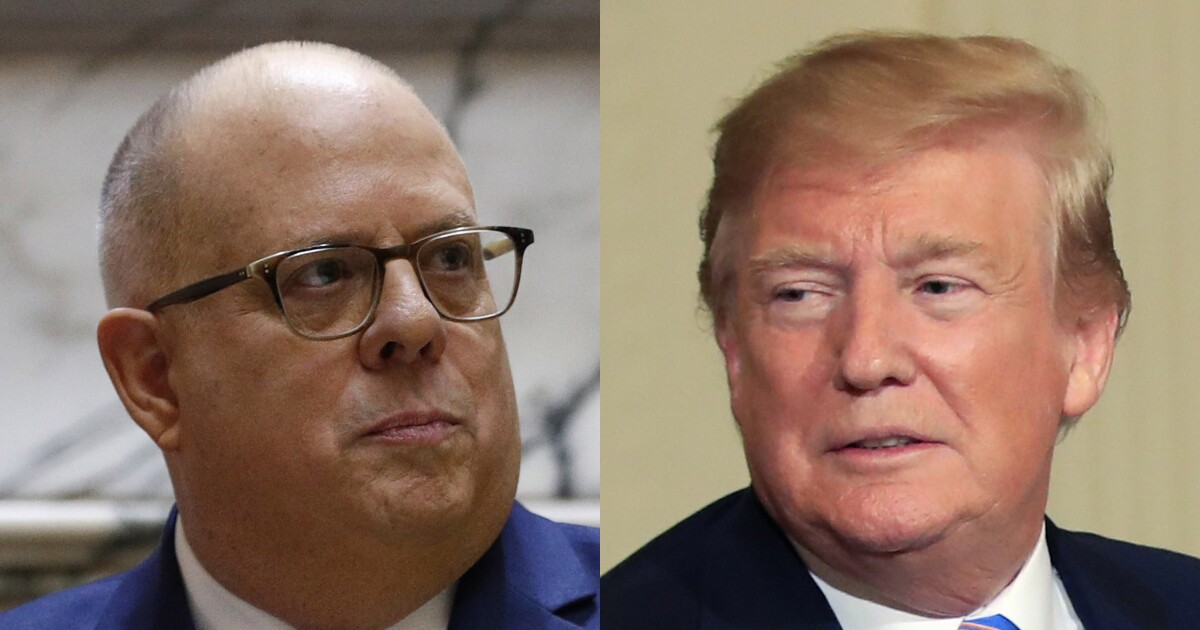 Gov. Larry Hogan (R-MD) will blame former President Donald Trump for the Jan. 6 Capitol riot and urge Republicans to reject the former president in a speech viewed as a precursor to a 2024 White House bid.

Gov. Larry Hogan (R-MD) will blame former President Donald Trump for the Jan. 6 Capitol riot and urge Republicans to reject the former president in a speech viewed as a precursor to a 2024 White House bid.

“Jan. 6 was not enthusiastic tourists misbehaving. It was an outrageous attack on our democracy, incited by the losing candidate’s inflammatory, false rhetoric,” Hogan will say Tuesday evening at the Ronald Reagan Presidential Library and Museum in Southern California, according to excerpts of the sharply worded address shared with the Washington Examiner. “Trump said we would be winning so much we’d … get tired of winning. Well, I’m tired of our party losing.”

Hogan, 65, will be the latest prominent Republican to take the stage at the Reagan library for its “Time for Choosing” speaking series meant to elevate future GOP leaders and potential presidential candidates. And Hogan, a longtime Trump critic who readily admits never voting for him, is as blunt as ever in his criticism of the former president and assessment that nominating him to lead the GOP again in 2024 would be a political disaster.

“The last four years were the worst four years for the Republican Party since the 1930s, even worse than after Watergate when Ronald Reagan had to rebuild the party from the ashes,” Hogan will say. “A party that lost the popular vote in seven out of the last eight presidential elections, and that couldn’t even beat [President] Joe Biden, is desperately in need of a course correction.”

“The truth is, the last election was not rigged, and it wasn’t stolen,” Hogan will add, mocking Trump’s unsupported claims that the outcome of the 2020 presidential election was fraudulent. “We simply didn’t offer the majority of voters what they were looking for.”

The Republican Party suffered a trio of stinging defeats on Trump’s watch, losing the presidency and control of the House and Senate.

Despite this dubious feat and the former president’s culpability in the Jan. 6, 2021, riot at the Capitol, he remains the de facto leader of the GOP — at least in the eyes of the most committed Republican voters. And with the party poised for major gains in this year’s midterm elections, the stain of Trump’s previous losses could be washed away — again, at least as far as grassroots Republicans are concerned.

Hogan, meanwhile, is an outlier in a party dominated by Trump, and he would begin the 2024 primary as a heavy underdog.

But the governor is poised to dismiss a possible 2022 Republican wave as the product of Biden’s incompetence, arguing the 45th president’s polarizing leadership carries long-term risks for the party. He also will make the case for a more inclusive, pragmatic approach to governing, declaring his principled but less caustic style reflects a Reagan strategy that sparked two landslide victories in presidential contests and laid the foundation for the GOP takeover of Congress in 1994.

“Enough of the angry rhetoric and the grievance politics. Enough of the narcissism of small differences. We can’t build a successful party by tearing it apart or burning it down, and we can’t restore America if we keep shrinking the tent and losing elections to the left,” Hogan will say. “We won’t win back the White House by nominating Donald Trump or a cheap impersonation of him.”

Hogan will be termed out of office next January and is expected to lay the foundation for a 2024 presidential bid between now and then. Trump is mulling a third White House bid and is expected to announce his plans at some point after the midterm elections in November.