Whether denying Jewish claims to Jerusalem or Hindu claims to Kashmir, the Muslim conqueror's goal is always to erase the past and lie about the present.

Israel And Kashmir: A Replay From The Islamist Dissimulation Playbook – American Thinker<!—->

Jerusalem, in Israel, and Kashmir, in India, have a common tie that binds: Muslims and their political allies in the West are diligently working to erase the long-standing Jewish ties to Jerusalem and Hindu ties to Kashmir by claiming that the subsequent Muslim invasions of both those regions preempt all other claims to the land—and by portraying themselves as victims of Jewish and Hindu imperialism.

The Jewish Bible mentions Jerusalem 669 times and Zion 154 times. The Christian Bible mentions Jerusalem 154 times and Zion seven times. The Quran does not mention Jerusalem even once. But Islamists assert their claim over the Holy City, particularly over the Dome of the Rock and the Al-Aqsa Mosque. These two monuments stand atop the Temple Mount, the site of Judaism’s most sacred First Temple—built in 957 BC, almost 2,000 years before the Ummayads erected the Muslim shrines. Muslims and their allies have engaged in a systematic campaign since the 1920s to erase the Jewish connection to the site and its ancient Jewish religious significance. Not only that, every Israeli action against jihadists is painted as an act of oppression through narratives that invert reality, a Quran-sanctioned strategy of dissimulation called taqiyya.

Islamists have been using the same strategy against Kashmiri Hindus in India since the late 1980s. It has intensified in the past few years. The goal is to legitimize and mainstream a Muslim identity for Kashmir, which has nursed Hinduism from 1500-1200 BC when the Vedas or Hindu scriptures were written.

The onslaught, in which the left-liberal dominated Western media is complicit, is multipronged: refer to Kashmir as Muslim territory, as if its history began with the forced conversions of Hindus from the 14th century onwards; call Kashmir an “occupied territory” and India an oppressor; declare legislation and other actions strengthening India’s hold over Kashmir draconian; blow up random incidents of violence against Muslims and present them as large-scale conspiracies; and accuse Indian Prime Minister Narendra Modi of planning the exclusion and eventual elimination of India’s 12% Muslim population. 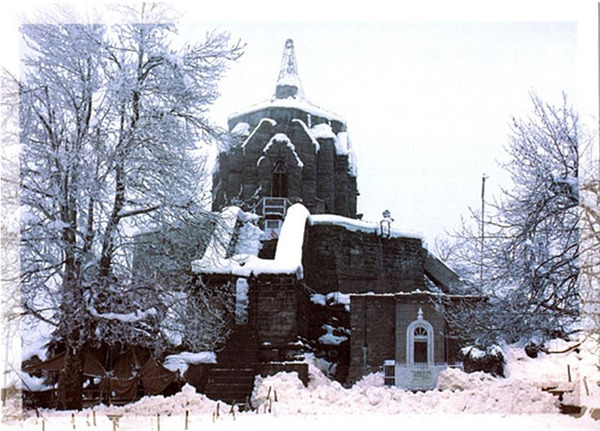 Image: The ~2,200-year-old Hindu Shankaracharya Temple dedicated to Shiva in Kashmir, with the ~627-year-old Khanqah-e-Moula mosque attached to it by Didier Lamouche. CC BY-SA 4.0.

A calumnious fiction with a Nazi-inspired name—‘Modicaust’—has been created. Islamists hope the equation with Hitler will sully Modi’s image and cause his defeat, bringing in a government that will loosen India’s hold on Kashmir, which the Modi government has tightened. Pakistan, which can’t win a conventional war with India, has fed this narrative, cultivating Islamists in America and left-liberals in the Western media and academia.

The mindset favoring Islamists is evident even in reports about books. Last month, while reporting on Gitanjali Shree’s novel Tomb of Sand winning the Booker Prize in the New York Times, cultural reporter Alex Marshall referred to “India’s partition from Pakistan,” denying in a few strokes on the keyboard the region’s 3,500-year-old Indic culture. The NYT has since added a “correction” but, when an erudite cultural reporter commits such an “error,” there is reason to suspect willful distortion.

Marshall’s choice of words amplifies recent attempts by American Islamists and their sympathizers to raise false alarms about a looming genocide of Muslims in Kashmir and other parts of India, whose government they have repeatedly described as “Hindu majoritarian.” In fact, it’s the Hindus in Kashmir who suffered forced conversions and seven exoduses imposed by Muslim rulers over 600 years. From being a majority in Kashmir before Muslims arrived, Hindu Pandits now constitute hardly 3% of the population.

Since becoming prime minister in 2014, Modi has abrogated Article 370, which granted special status to the Indian state of Jammu & Kashmir. Under Article 370, it had a separate constitution, its own criminal laws, and a flag, and its residents enjoyed a host of benefits. He also abrogated Article 35A, which defined “permanent residents” of Kashmir and granted them privileges, including property ownership rights denied to other Indians in the state. Article 35A promoted Kashmiri insularity through a sexist rule that took away property rights from female “permanent residents” who married non-residents. In addition, Modi has acted against Kashmiri politicians and those in the media who amassed wealth over the troubled decades by playing sides craftily with terrorist groups, Pakistan’s ISI, and the Indian state, and on the seminar circuit.

In 2019, Modi outlawed triple talaq, a feature of shariah law that allows Muslim men to divorce their wives by merely pronouncing “talaq” three times. He is pushing a uniform civil code of personal laws with no special benefits for any religious group. His government has fast-tracked citizenship for persecuted Hindus, Sikhs, Christians, Buddhists, Jains, and Parsis from neighboring Afghanistan, Bangladesh, and Pakistan through the Citizen Amendment Act (CAA). The CAA in no way restricts citizenship; any foreigner may apply through normal channels. But American Islamists and their cohorts have seized upon these reforms to project the disingenuous case of Muslim victimhood in India.

Among the organizations of the Muslim Brotherhood (MB) promoting these false narratives are the Islamic Society of North America (ISNA), the Council on American Islamic Relations (CAIR), the U.S. Council of Muslim Organizations (USCMO), and the Indian American Muslim Council (IAMC). ISNA and CAIR were co-conspirators in the U.S.’s largest terror funding trial—the U.S. vs. Holy Land Foundation case—and were found guilty of providing material support to Hamas. The USCMO was involved in funding the Palestinian Islamic Jihad (PIJ) and the Taliban, and the IAMC has collaborated with CAIR to condemn the State Department’s omitting India from the list of “countries of particular concern.” Both organizations allege that “hate crimes” against minorities have made India a threat to democratic values and Muslims worldwide.

These organizations and their mouthpieces, which themselves espouse “civilizational jihad,” falsely accuse Modi and his Bharatiya Janata Party (BJP) of promoting division. They allege there are calls to ostracize Muslims or target them for violence and describe India as unsafe for Muslims and Christians. A recent issue of ISNA’s magazine, Islamic Horizons, describes Modi as a reincarnation of Hitler and claims that Hindu nationalists see themselves as “Aryans.” An earlier issue contained articles accusing India of “othering” Muslims and subjecting them to “Orwellian loyalty oaths” and said the Modi regime is guilty of “rampant ethno-nationalism.” The magazine alleged that scholars invited to a conference on “Dismantling Global Hindutva,” organized by Islamists and radical Leftists, received more than “a million emails threatening death, rape and/or bombs.”

Articles also claim that the Rashtriya Swayamsevak Sangh (RSS), a social service organization in India that has demonstrated tolerance of Muslims, idolizes Hitler. They accuse the Hindu American Foundation (HAF) of taking its “Hindu supremacist” agenda to the U.S. public school system and using the American justice system to sue scholars who criticize Modi, his party, and the RSS. Despite evidence that Muslim leaders intent on fomenting trouble provoked recent riots in Delhi, the magazine described the events as “pogroms” against Muslims. It alleges that Muslim women are “put up for auction,” that Muslims are lynched frequently, that those who attack Muslims are “applauded as heroes,” and that some states have outlawed marriage between Muslim men and Hindu women. All untrue. The intention is clear: demonize Hindus and project Muslim victimhood.

As early as 1948, the year after India and Pakistan came into being, India had complained to the U.N. about Pakistan’s occupation of parts of Kashmir. But the U.N. remained indifferent. Now, when Islamists have complained that India is illegally occupying Kashmir, stripped it of its autonomy, and subjected it to blackouts and lockdowns, the U.N. Human Rights Organization, under the influence of the Organization of Islamic Cooperation (OIC), cites Indian action against planned riots and terrorist activity in Kashmir as oppressive and undemocratic—even though the International Covenant on Civil and Political Rights, which India has ratified, allows states to impose restrictions to protect public order.

India is the victim of bad international press on Kashmir. The Kashmiri identity is being falsely legitimized as purely Islamic and India is being portrayed as a Hindu oppressor. This parallels closely the way deep Jewish roots in Jerusalem are denied and Israel is painted as a Jewish oppressor. The Islamists have achieved this through their connections in academia, the media, and among radical leftist groups despite Pakistan’s known sponsorship of terror groups that commit ceaseless incursions into the region.

This inversion of history must not go unchallenged.