Gun grabbers have a peculiar tendency to invoke guns' use as sporting devices as a rationale for gun control.

Gun grabbers have a peculiar tendency to invoke guns’ use as sporting devices as a rationale for gun control.

Take actor Matthew McConaughey, who just last week seems to have charmed the pants off of some Americans, and even some gun rights proponents when he argued in favor of gun control intervention to stop gun violence, such as raising the minimum age requirement to purchase an AR-15 to 21.

A few years back, however, he wasn’t so measured and likeable in his approach to gun control, calling for an outright ban on “assault weapons for civilians,” saying that doing so is “a no-brainer.”  “And to my friends out there,” he continued, “that are responsible owners of these recreational assault weapons that they use for recreation, please let’s just take one for the team and set it down.” He immediately went on to tackle magazine capacity, claiming that “Texas has a three-shell limit to hunt migratory birds. Do the math.  You get my point.”

What, exactly, is a “recreational assault weapon?”  It’s the silliest description imaginable from someone that, somehow, the public seems to take so seriously on this issue.  It’s at once both oxymoronic and incoherent.  If it’s an “assault weapon,” after all, its purpose is to inflict violence upon other people.  If it’s a “recreational weapon,” its purpose is for recreation, and not to inflict violence upon other people.

What he means to achieve with this deceptive language, as all gun control activists do, is to obscure the purpose of the Second Amendment and to establish a distinction between types of gun owners.  The Second Amendment exists, of course, solely for the purpose of Americans having weapons that can kill other people in defense of life and liberty, and has precisely nothing to do with recreation.  But this narrative framework suggests that those who wish to use guns as recreational devices are good, while those who believe the primary purpose of their gun is to kill other people are bad.

Guns, like any tool, have myriad uses, based upon the user’s desire.  A hammer, for example, is equally useful in driving nails into wood as it is in fatally cracking a person’s skull.  The distinction is that a hammer’s primary purpose is to drive nails into other objects.  A gun’s primary purpose, for most people, is not to kill migratory birds, but to kill people who might do them harm.

According to a Gallup survey in October 2021, a full 88-percent of gun owners say that “protection against crime” is a reason for their owning a gun.  That is to say, nine-out-of-ten gun owners keep their guns so that they can potentially kill other people if the need arises.

I’m not an avid gun enthusiast, but I know enough to know that the AR-15 isn’t ideal for deer hunting.  But what the AR-15 does have is a large payload potential, mild recoil, and tremendous accuracy and stopping power.  These are all traits which would make it incredibly useful for self-defense, if, say, your home was invaded by several intruders. 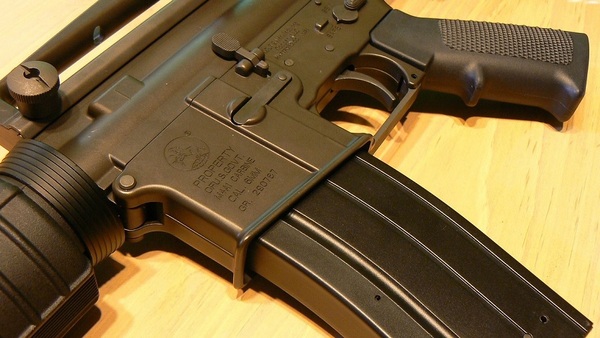 It would also make this weapon incredibly useful in a militia.  Herein lies even more incoherence in the argument being made by gun-grabbing progressives these days.  Back in 1939, the Supreme Court ruled that only guns with “some reasonable relationship to the preservation or efficiency of a well-regulated militia” were justifiably afforded protections under the Second Amendment.  By that logic, the AR-15 should be explicitly protected rather than isolated for exclusion from Second Amendment protections.  But today, the left’s argument is that the AR-15 is too good in its potential usefulness in a militia, and its usefulness in deer hunting, or whatever, is lacking.

None of that makes any sense, and that’s because it’s all smoke.

Whoopi Goldberg told the audience at “The View” that she doesn’t “want all your guns.”  But she wants “that AR-15. I want it.”

Why?  Ostensibly, because the AR-15 is so deadly that it needs to be taken away from even law-abiding citizens.

But you know what’s deadlier?  “Hands, fists, feet, etc.” as the FBI categorizes these things in its aggregation of the data.  “Knives or cutting instruments” were also far deadlier.  In 2019, a total of 364 murders were committed by murderers using rifles, including the dreaded AR-15.  But 600 people were murdered by “hands, fists, feet, etc.” in 2019, while 1,476 murders were committed using “knives or cutting instruments.”

But here’s the big question.  If people who view guns as an instrument to kill other people are the problem, as we are told, then why are handguns not the target of gun control regulation?  A handgun has little to no recreational use whatsoever.  They exist exclusively for the purpose of killing people, and in 2019, handguns were responsible for 6,368 murders.  That’s the lion’s share of the more than 10,000 murders committed with firearms in that year.

Fewer than 4 percent of those murders were committed with rifles.  But it’s your rifle that that Whoopi Goldberg and Matthew McConaughey want.

Nonsense.  They just want your guns.  If the argument is that “this gun is so deadly that it warrants government regulation,” then it’s only logical to presume that other guns will follow after the AR-15 is banned.  Our position should not be to let them incrementally gain ground in disarming Americans, but to stalwartly deny them every inch of ground that they seek.