The laws and regulations currently in place are arbitrary and capricious and, therefore, have no business hobbling our Second Amendment rights.

(Note: I am not a lawyer. This article is not intended to provide legal advice about the types of guns discussed or the laws that apply to them.)

The case brought by the New York State Rifle and Pistol Association before the Supreme Court presents the following, limited issue: “Whether the State’s denial of petitioners’ applications for concealed-carry licenses for self-defense violated the Second Amendment.” That’s a pretty tight question. Basically, it asks if New York has the right to deny a concealed carry permit to an otherwise law-abiding citizen. We already know (District of Columbia v. Heller) that carrying a weapon is a right, not a privilege. That would seem to make this an open-and-shut case. Yet, the Court has taken six full months to rule on a case that, on its face, is a complete no-brainer. What’s taking all the time?

We already know that, as the Supreme Court said in Heller, the militia is every able-bodied male able to bear arms, and the term “well regulated” simply means “properly disciplined and trained.” Further, the statute exists to guarantee the security of a free people, not the government. So, what’s up? Is Justice Thomas finally going to wrestle the Second Amendment from its perpetually disfavored status?

The Second Amendment protects a very specific right. That right is a freedom of action that belongs to the individual. It is “unalienable” according to the Declaration of Independence. That means that you can’t take it away from me. You can’t give it to me, either. It’s mine. Period. But New York likes to say that you don’t have a good reason in their eyes, so you can’t exercise your rights. That’s plain wrong so the case should be a slam dunk decision for the plaintiff. But nothing has been announced. Why?

The simplest answer is that SCOTUS takes its time to get every ‘I’ dotted and ‘T’ crossed. But I wonder if there isn’t something else going on. And that is something called “the Court’s own motion.” This is a mechanism holding that “a court can act on a contravention or suspected contravention of the overarching obligations on its own motion.” That is, if the Court can act if it sees a larger obligation to settle a set of larger questions, perhaps to make certain that all lower courts apply the law properly.

In the case of Heller, we’ve seen District Courts do backflips to avoid letting law-abiding citizens exercise their rights. Several of these cases reached SCOTUS, only to be batted away, leading to Justice Thomas’ disgust with the rest of the Justices who treat the Second Amendment as a disfavored right. But the issue won’t go away. As lower courts insist on misreading Heller and the Second Amendment, it may be that SCOTUS has made its own motion. We won’t know until the decision is published but allow me to speculate a bit. And at the same time, let me throw in some not-so-well-known facts.

Federal gun regulation began in 1934 with the passage of the National Firearms Act (“NFA”). Prohibition arrived in 1920, creating massive profits for gangsters like Al Capone. One of his pet toys was the Chicago Typewriter, A.K.A. the Thompson Submachine Gun or Tommy Gun. It fired a .45 caliber bullet in a fully automatic manner. Pull the trigger once and every cartridge in the gun would be expelled. That bullet was four times the mass of the AR-15 varmint round. Coupled with a 100-round drum magazine, it certainly made bystanders dive for cover.

The Tommy Gun wasn’t particularly accurate. As GI’s learned in World War II, it was good for clearing rooms in house-to-house combat but not much else. It was expensive to acquire and use, but its association with bootleggers made it a symbol of organized crime.

So, when Congress decided to “do something” about organized crime, the Tommy Gun was an easy target. It could be concealed under a trench coat making it seem more sinister. Ultimately, the NFA banned (by taxation) rifles with barrels under 16 inches and shotguns under 18 inches. One must ask how this made the world safer. In short, it didn’t because machine guns were rarely used in crime and short-barreled rifles aren’t either.

With the advent of specialized stabilizing braces, the AR-15 platform was adapted to allow severely injured persons to fire these weapons well. Regulations defined what an “AR Pistol” was, and many thousands or even millions have been manufactured. Here’s an example. 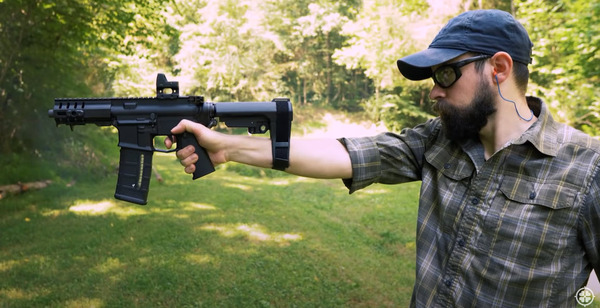 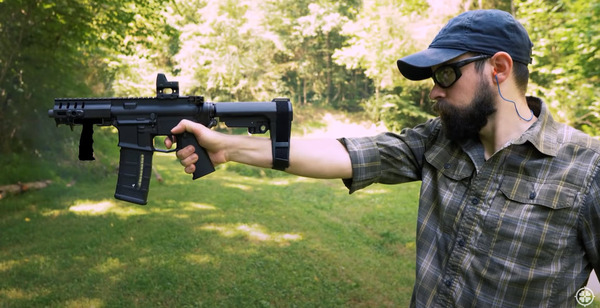 Image: AR Pistol with a brace and a vertical foregrip (edited version of previous photo).

The photo above, which looks almost identical to the first photo in this article, is also legally an SBR that must be registered with the feds. Why? It has the brace that makes it a pistol but the little vertical piece of plastic attached to the fore-end changes it. If it had a horizontal hand grip, it would be a pistol. Makes perfect sense, doesn’t it? And again, without the vertical grip, the above is a perfectly legal pistol.

And the frightening gun above is a rifle. It’s standard issue for the Israeli army. Because of its bullpup design, it has a sixteen-inch barrel, while the other two guns have shorter barrels. They become SBRs if a piece of plastic is changed. But what real difference is there?

When the AR pistol has a ten-inch barrel, the Tavor becomes the shortest of the guns at 26 ½ inches long. That’s right, a full-out battle rifle is shorter than a pistol. And because it has a 16-inch barrel, it can have any “furniture” you want to put on it, and it will stay legal. But you add that furniture to a pistol and it becomes illegal unless you pay $200, wait a year, and get a blessing from the Feds for each piece of plastic you add.

Both of those other guns are 27 ½ inches long with a 10-inch barrel. So, the pistol is larger than the rifle. And, by the way, they all fire the same pipsqueak varmint round. That’s right, they are all chambered in .223 Remington caliber, a round well suited for hunting groundhogs and other small game. In many states, it’s too weak to be lawful against deer. (CO, VA, CT, IL, IA, MA, OH, NJ, WA, WV)

If none of this makes sense, you’re in good company. Legally, the distinction between rifle or pistol is “arbitrary and capricious.” Further, the definitions serve no good purpose and are utterly contrary to the Second Amendment. There is no possible lawful distinction between protected civilian firearms and unlawful firearms based on caliber, feed mechanism, magazine size, operating principle, or any other possible consideration. Even fully automatic operation is protected by the Second Amendment. And any “law” or “regulation” on firearms must satisfy the Second Amendment, not some politician.

Our founding Fathers had cannons. They had the most powerful rifles for war. And when they wrote the Second Amendment, they knew this. They knew that “well regulated” meant properly disciplined and trained (see, Heller). Thus, there is no constitutional basis for maintaining any sort of restriction on the type of arms that civilians may own. The basic issue is simple. Civilians are not to carry arms for the purpose of frightening or murdering people. That’s it. As the Statute of Northhampton put it, you must not carry arms “in affray.”

Has Justice Thomas persuaded other justices to settle the Second Amendment question permanently and completely? I don’t know but I’d bet the question has arisen in conversation.