It's time for us to stop using all forms of the word “homophobia.” This made-up, meaningless word is pure psychobabble and its sole purpose is to bully people.

Imagine Guy A calls Guy B a “homophobe.”

Guy B responds: “What do you mean? What is a ‘homophobe’? Can you define the word?”

The key is the shaming. The rest is irrelevant.

The word is a tool of ideological warfare. It frames the argument in a way that one side of the argument is “good” and the other “bad.” It weaponizes language to make one person psychologically healthy and the other psychologically dysfunctional. It bypasses rational, logical debate in favor of defining the person in the debate. In this way, it “wins” arguments by intimidating anyone away from even getting into the debate arena. It silences rational debate by preventing it from ever happening.

Calling someone a “homophobe” is an easy, no-cost way to establish moral superiority on the cheap. “Logic,” “rationality,” “clarity,” and so on—all part of the hard work involved in defining words clearly and thinking rigorously—are irrelevant. The point is power. It imbues the accuser with instant righteousness and smears the accused as psychologically defective. It’s no wonder it’s become so infectious and popular.

But let’s imagine Guy A can define the word.

“Phobia” is a psychological term. An individual with a genuine phobia is in the grip of a diagnosable, clinical psychological condition.

When asked, “What is a woman?” Leftist Supreme Court nominee Ketanji Brown Jackson said, “I’m not a biologist.”

Yet almost everyone slings around the word “homophobe,” and nobody ever asks: “Are you a clinical psychologist?”

The implication from Brown Jackson is that only professional biologists (“trust us, we’re experts!”) have been initiated into some sort of secret knowledge that allows them—and only them—to understand what women and men are, while the rest of us are excluded from this esoteric inner circle. Yet apparently, when it comes to diagnosing various psychological disorders, anyone can do it.

So, Guy B could then respond: “Are you a licensed clinical psychologist?”

Let’s give Guy A the benefit of the doubt, and assume he is a licensed clinical psychologist.

Is Guy B his patient? Has Guy B been under strict, professional observation under controlled conditions over an extended time, allowing Guy A, reluctantly, of course, to arrive at this diagnosis after careful scrutiny? 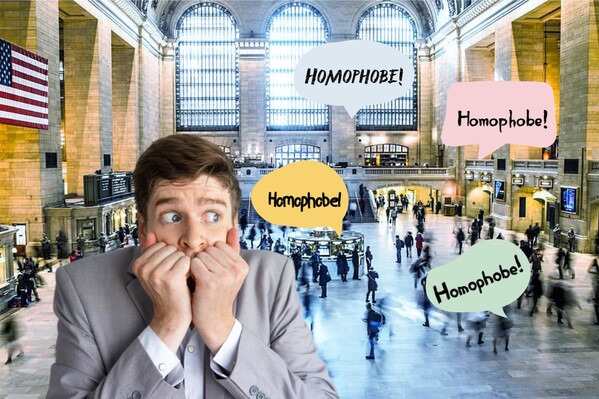 No. Of course not. The “diagnosis” is based on mind-reading. It’s an imagined ability to “know” what’s in someone’s subconscious (or heart) better than that person themselves. In a sane system, this kind of diagnosis at a distance would mean a psychologist lacked professionalism and should lose his license.

But let’s go even further: imagine this was a client of a professional clinical psychologist. Is that the way professionals treat someone with a genuine psychological condition? By publicly accusing that individual of having a disorder in a scolding, shaming manner?

Of course, all of this is applying reason and logic to a dynamic that is fundamentally irrational and absurd.

The point, again, is power. It’s ideological warfare. It weaponizes shame to win arguments. It shuts down rational discussion by branding someone as psychologically dysfunctional for having a different perspective on a complex topic.

Let’s be clear: “homophobia” is a made-up word.

It never existed throughout human history. But then one day, a guy imagined a word that meant “an irrational fear of gayness,” and liked it. He wrote it down, published it, and it was off to the races. (That guy was apparently George Weinberg, a psychologist, around 1969.)

The word was invented. The original idea, it seems, was to turn the tables on the power of accusation against individuals who weren’t in favor of same-sex relationships.

But now, this dynamic has mutated. The word has become a tool to depersonalize a human being—to reduce a person to nothing but a “thing” infected with a mental disease. The subtext: “You’re no longer a human being. You’re a homophobe.”

Depersonalizing the depersonalizers isn’t an effective cure for depersonalization. It also isn’t good for society. This road leads to violence. It’s a form of trying to overcome evil with evil. “Instead of you bullying me, I’m going to bully you.” As Nietzsche might say, it’s a way of fighting monsters that turns you into a monster.

“Homophobia” is often assumed as the sole, universal, only possible explanation for someone who doesn’t fully submit themselves to The Narrative. It tries to explain away all resistance to The Narrative as a kind of illness of the mind and heart.

It doesn’t matter that there might be truckloads of science, reason, logic, and evidence in Guy B’s arsenal. A single word sweeps all of that away and bypasses it with a simplistic, back-of-the-hand slogan. After all, character assassination is much easier than thinking.

Real phobias are treatable with systematic desensitization. They’re treatable by gradually exposing a person to whatever they’re afraid of. When someone can be exposed without “excessive” anxiety (note the lack of precision in the word “excessive”), the phobia has been successfully treated. The fear has been exposed as irrational and unnecessary.

In many cases, it’s the opposite. The more certain individuals are exposed to all this, the more averse they become. There aren’t irrational fears, but at least in some cases, principles that are quite rational. (One exception can be children, who are still learning the rudimentary basics of life, and so are highly vulnerable—and gullible.)

None of this offers reason to bully, shame, or depersonalize in either direction. There’s some room for healthy tolerance and mutual respect in these matters. Sexuality is a complex topic.

But the word “homophobia” is poisoning the conversation. Instead of producing clarity and understanding, it inflames, confuses, and depersonalizes. It corrupts the possibility for genuine dialogue. It opens a portal for hatred to flow from one human to another. It also paves the way for the open persecution of anyone who hasn’t drunk the Kool-Aid of the Stalinesque narrative that powerful individuals are trying to shove down our throats.

But even more, the word is psychobabble.

It’s time we stopped using it.

Steve Rose is a pseudonym.