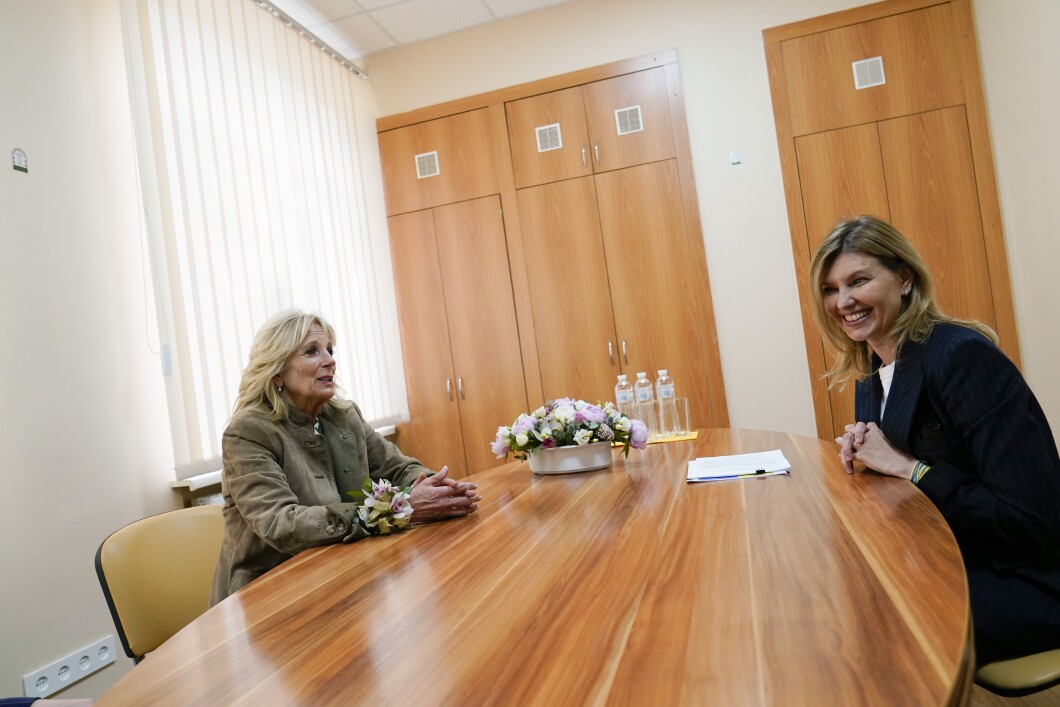 The first ladies embraced as Biden, who crossed the border from Slovakia, presented Zelenska with flowers before a meeting inside a school that is being used as temporary housing for displaced Ukrainians.

“I wanted to come on Mother’s Day,” Biden said, according to the press pool. “I thought it was important to show the Ukrainian people that this war has to stop, and this war has been brutal, and that the people of the United States stand with the people of Ukraine.”

“We understand what it takes for the U.S. first lady to come here during a war when the military actions are taking place every day, where the air sirens are happening every day even today,” Zelenska said.

Biden joins other first ladies who have visited combat zones. For instance, in 2005 and 2008, Laura Bush visited Afghan women and children in Kabul.

Modern U.S. first ladies who visited combat zones while their spouse was in office:

The visits come the day before “Victory Day,” an annual holiday when Russia celebrates its role in defeating Nazi Germany at the end of World War II. Russian President Vladimir Putin could use the occasion to announce a ramped-up war effort. Meanwhile Russian officials said they do not expect to hold a major event in bombed-out Mariupol.

The Mother’s Day meeting comes as part of the first lady’s trip to Slovakia and Romania to meet with embassy personnel, humanitarian workers, and military members during the war in Ukraine. Biden also met with Ukrainian refugees, telling one mother that the war is “hard to understand.”

Biden is one of the highest-profile visitors from the United States to visit the war-torn area, and the trip marks her latest effort to prop up her husband in the months leading up to the midterm elections. President Joe Biden has yet to visit during the months-old conflict, but members of his Cabinet have made the trip.

Inside the school, the first ladies joined children working on art projects for their mothers.

“We all feel your support and we all feel the leadership of the U.S. president, but we would like to note that the Mother’s Day is a very symbolic day for us because we also feel your love and support during such an important day,” Zelenska told Biden.

Biden, who crossed back into Slovakia, is expected to visit with members of that country’s government before departing for the U.S. on Monday.