Biden and the Democrats have been notably silent about Erdogan opening hostilities against the Syrian Kurds.

On June the 1st, Turkish president Recep Tayyip Erdogan announced that he intended to use his military to once again move against the multi-ethnic Syrian Democratic Forces in northern Syria. The Syrian Democratic Forces are the armed wing of the Rojava government, a sort of autonomous region that broke from the main Syrian government in 2014. The Rojava region is not wholly unfriendly to the Syrian Arab Republic, but is also not quite part of it. It is also not a party to the “Syrian Rebels” who have largely been absorbed by the Turkish occupation of northern Syria or the al-Qaeda presence in Idlib province. Once again, the SDF have been in opposition to both the rebels and the Syrian government, but have been more likely to cooperate with the Syrian government in the past.

The SDF are probably most famous for being the ground forces who, supported by U.S. air cover, drove the Islamic State from its capital of ar-Raqqa in 2017. I say these forces are multi-ethnic because, though the biggest component is Kurdish, the SDF also has many Arabs, Assyrians, Turkmen, and Armenians within. It is a nice snapshot of the ethnic diversity of Northern Syria and Iraq. However, the SDF are largely referred to as “Syrian Kurds” in the news, and this has seemingly been used by their enemies. I refer to how the Kurdish association allows the conflation the Kurdish-led SDF with the Kurdish Marxist terrorist organization, the PKK.

The PKK (Kurdish Workers’ Party) are Kurdish rebels in Turkey who fight for an autonomous Kurdistan in southern Turkey. Since 2015, the PKK have purportedly killed hundreds of people in sniping, IED attacks, and rocket attacks. I want to make clear that I believe the state of Turkey has the right to defend itself against PKK terrorists. That said, the PKK, to their credit, did help with the liberation of Northern Iraq and Syria from the Islamic State. However, just to demonstrate how complicated the Kurdish situation is, the Iraqi Kurdish Peshmerga disassociated from the PKK after rising tensions.

I have not seen President Joe Biden say anything in condemnation of the announced Turkish offensive against Syria’s Kurdish-led SDF. I intentionally waited for seven days after the announcement to give him the chance. I suppose I should not be surprised, it was Joe Biden who gave his approval of the first such encroachment in 2016. Secretary of State Antony Blinken said the current attack might, “…undermine regional stability (and) provide malign actors with opportunities to exploit instability.” However, nobody would have let Donald Trump off the hook for letting somebody else speak his indignation, so there is no need to give Joe the benefit of the doubt here. Considering how desperately NATO needs Turkey’s approval right now, I would not expect much. 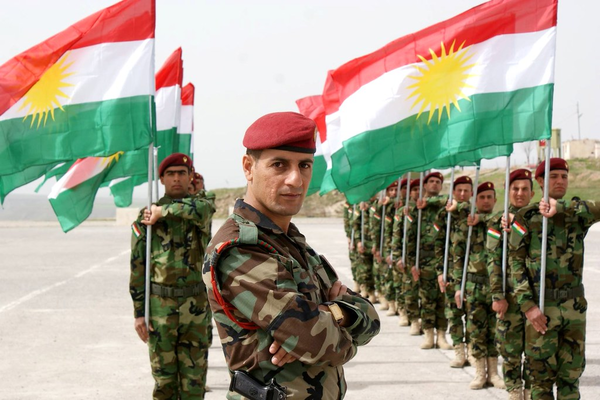 Then again, I remember how the Democrats could not have cared less about those allies of ours until it provided them an opportunity to criticize Donald Trump in 2019. In particular, I remember the remarks of then former-vice president Joe Biden saying that Donald Trump, “betrayed our word as a nation” and that Trump was following the whims of “a fellow strongman.” He even felt the offense was enough to warrant an impeachment of the America First President.

Why bring up only Biden’s hypocrisy? There have been plenty others. Photojournalist Jason Motlagh was quite incensed against Donald Trump’s betrayal of the Kurds in 2019, but has remained noticeably silent this time. Since Motlagh is often reporting from warzones, perhaps he is just too busy. I might be able to accept such an excuse from him. However, I know that David Ignatius of the Washington Post does not have that excuse, nor does the editorial board of the Times of San Diego. Regardless of the hypocrisy, the journalists mentioned have done perfectly respectable work in the past and perhaps should be cut some slack for not paying attention to the Mideast while there is a war going on in Europe.

How about Donald Trump’s political foes? Chuck Schumer had some pretty strong words about betraying the Kurds in 2019, how about now? The only statement I found from him on June 1st was celebrating Pride Month. The same could be said of Nancy Pelosi, Adam Schiff, and even Lindsey Graham. To be fair to Lindsey, this criticism of Putin might be seen as a tacit condemnation of Turkey, but I doubt it. The round of criticism for these people’s silence is strangely tepid with only a few people doing such.

Mitch McConnell criticized Trump for “only [benefitting] Russia, Iran, and Assad.” However, I suppose abandoning the Kurds only benefits Russia when Trump does it. Then again, the SDF has expressed interest in getting closer to the Syrian government if the Turks attack, which was not something they did in 2019. I may not have been a fan of Donald Trump’s decision in 2019, but it seems to me that the ramifications could well be much more serious this time around. Of course we will not hear the thunders of condemnation of President Biden for his silent approval of Turkish encroachment; that would be in violation of the “America’s back!” narrative.

I will let the sitting President describe my opinion on this matter in his own words:

“[He] sold out the Syrian Democratic Forces — the courageous Kurds and Arabs who fought with us to smash ISIS’s caliphate — and he betrayed a key local ally in the fight against terrorism. But that’s not all — he betrayed our brave troops, who sacrificed alongside them. He betrayed our word as a nation — raising doubts among our allies around the world about America’s security commitments.”