Nineteen thirty-one was the beginning of the end of our school system. Yes, 1931.

Emily Hanford became famous over the last several years for talking constantly about the Science of Reading.  That’s where children learn to read in the simplest, most efficient way and go on to enjoy many hundreds of books.  Long story short, what she means by the Science of Reading is phonics — nothing less, nothing else.

The problem is that the left in our country forced phonics into oblivion starting in 1931.  So what was going on for those 90 years from 1931 to now?  A titanic and quite stupid con, that’s what.

Basically, the professors of education at Harvard and such places identified and codified the things that work — and then (this is my summary) they made sure that none of those things are allowed in the schools.  Only methods known not to work are praised in our classrooms.  The simplest, most appropriate name for this approach is the Science of Illiteracy.

Sometimes the impression is given that these professors drifted around from one method to another.  That’s actually not true.  They have only one method — but it has many names (such as sight-words and Whole Word) — and they are content to hide inside the confusion they create.

Note how precise the pseudo-reading program is.  You get rid of letters and sounds.  You don’t mention an alphabet, and you don’t teach children what the alphabet represents.  The Science of Illiteracy is really easy.  You just leave out the valuable parts and let kids struggle.

One of the oddest spectacles you’ll ever see is the top brains in American education all agreeing that the alphabet serves no useful purpose.  How do you find fanatics like this?

These professors were monolithic; each one parroted the wisdom of the others.  Each one finds a slightly different way of making the same dubious claims.  Notice the smug, Olympian tone.

“Current practice in the teaching of reading does not require a knowledge of the letters,” says Dr. Donald D. Darrell.

“The skillful teacher will be reluctant to use any phonetic method with all children,” says Dr. Paul Witty.

Dr. Roma Gans tells it simply and starkly: “In recent years phonetic analysis of words at any level of the reading program fell into disrepute.”

“Little is gained by teaching the child sounds and letters as a first step to reading.  More rapid results are generally obtained by the direct method of simply showing the word to the child and telling him what it is.”  Thus spake Anderson and Dearborn.

“The words should be recognized as whole words.  It is detrimental indeed to have the children spell or sound out the words at this stage.”  That’s Bond and Wagner.

We have to thank Rudolf Flesch for creating a time capsule circa 1940 in the first chapter of his famous book Why Johnny Can’t Read.  He quotes all the schemers shaping our culture.  A dozen of these people took children down the wrong path so they would become victims of the Science of Illiteracy.

The success of Flesch’s book in 1955 was the first sign of resistance by ordinary citizens.  The Education Establishment didn’t wait six months before it set up the counter-group known as the International Reading Association.  This was a massive organization intended to keep teachers and parents in line.  It succeeded to a tragic degree.

How do the professors refer to their voodoo reading?  In the most respectful terms, as if Einstein had written it out for them.  On the other hand, Rudolf Flesch complained that teaching children to read English with sight-words means eliminating 4,000 years of progress, as we moved from difficult symbol languages (such as Egyptian hieroglyphics) to more efficient ways to let great masses of people read their language.

Nineteen thirty-one was the beginning of the end of our school system.  Yes, 1931.  That’s when the education professors pushed phonics out of the public schools and imposed a sham method that virtually guaranteed that most students would become functional illiterates, evidently the goal of the Science of Illiteracy.

This power-grab in 1931 was historically remarkable.  The Depression had just started.  The country was nervous and unstable.  The professors thought they had enough leverage to pull off a coup, almost as ambitious as the attack on Pearl Harbor but with even greater ramifications for the future.

I wouldn’t be surprised if all these professors quoted by Flesch were members of the Communist Party (AKA the Communist International).  They were clearly in control of K–12 education in America.  All they had to do was befuddle and outwit the public.

Money was a big factor.  All the top professors made millions by creating a series of little books often referred to as Dick and Jane basal readers.

Please remember that Dr. Samuel Orton did a famous study in 1928 that determined that sight-words would mess up a child’s brain.  Education professors had to pretend for decades that they believed in a method that they knew was fake.  Their deception ushered in the Science of Illiteracy.

Throughout this saga, the Education Establishment bullied recklessly as they announced their visions, denounced all research that didn’t support their chicanery, and forced the children and parents to accept their Science of Illiteracy.

We see this reckless swagger now in the way the Democrats try to control government the same way they control education.  Americans can learn so much about weaknesses in our democracy by studying K–12.  Our ideals break down quickly when ruthless people break all the rules.

We can easily save the public schools, but only if we adhere to the Science of Reading.  Here’s a four-minute version of that.

Bruce Deitrick Price’s new novel is Frankie, about a robot designed to engage in smart conversation with humans.  No other skills.  Harmless.  Chaos ensues.  (For an excerpt, visit Frankie.zone.) 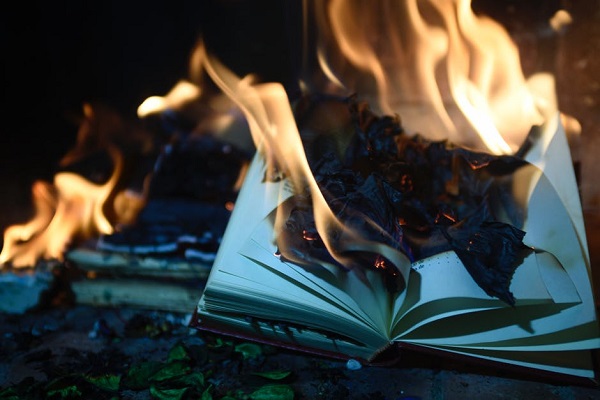