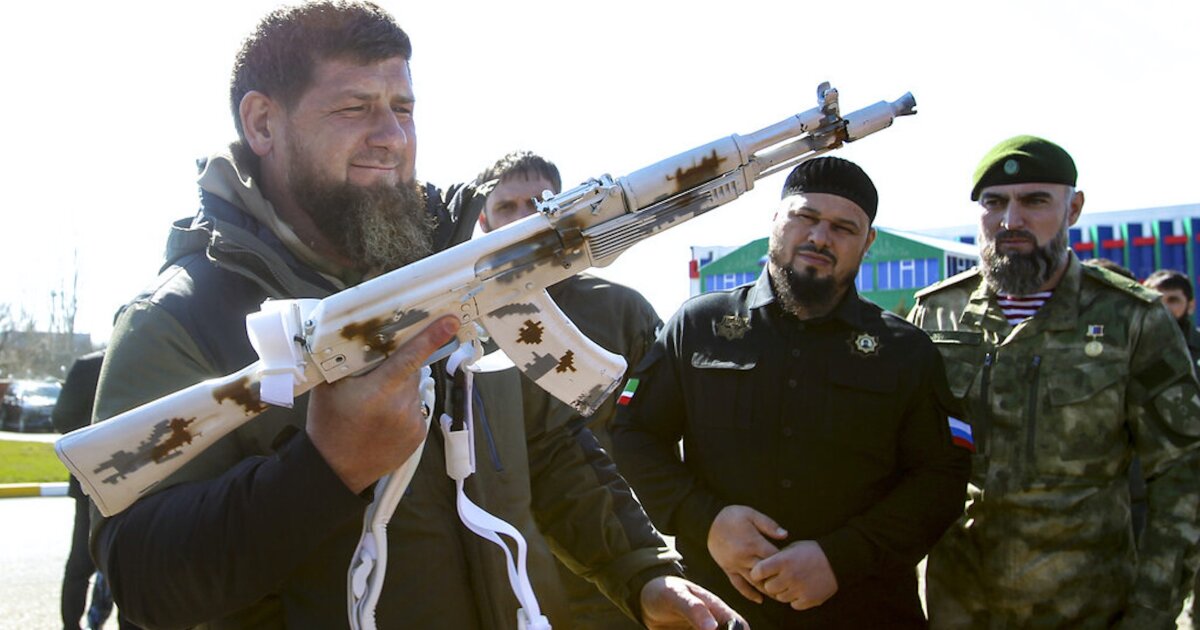 Chechen strongman Ramzan Kadyrov urged Turkey's president on Sunday not to assist with the evacuation of Ukrainian forces trapped underneath the Azovstal steel plant in Mariupol, calling some of the fighters "murderers and atheists."

Chechen strongman Ramzan Kadyrov urged Turkey’s president on Sunday not to assist with the evacuation of Ukrainian forces trapped underneath the Azovstal steel plant in Mariupol, calling some of the fighters “murderers and atheists.”

Kadyrov, the leader of the Chechen Republic of Russia, made his appeal to Turkish President Recep Tayyip Erdogan on Telegram, arguing that the Ukrainian troops holed up inside the steel plant in southeastern Ukraine are “fascist criminals” known for “regular statements insulting the great Islamic values.” Turkey has been in talks with Ukraine and Russia, attempting to broker a deal to evacuate some of the Ukrainian fighters from the Azovstal steel plant to Turkey. The Chechen ruler, who is Muslim and leads a predominantly Muslim region of Russia, was referencing the members of Ukraine’s Azov Battalion, who early in the war boasted about greasing bullets in pig fat to shoot Chechen soldiers with.

“With all due respect to the leader of the Muslim state, I would like to remind you that the Azov regiment is a fascist-Nazi criminal armed formation that is involved in numerous atrocities and murders of the civilian population of Donbas,” Kadyrov said on Telegram.

“In the cellars of ‘Azovstal’ these fascist criminals keep civilians, using them as human shields. The members of this bandit organization are known in Ukraine and beyond for their regular statements insulting the great Islamic values ​​and ridiculing the religion of Islam in general,” the Chechen ruler claimed.

Kadyrov, 45, then warned Erdogan that Russian Muslims already troubled by Turkey’s support of Ukraine would be further outraged if he were to become involved in efforts to evacuate members of the Azov Battalion.

“If the Muslims of Russia were saddened by the news that Turkey, a Muslim country, helped Ukraine with the supply of Bayraktar drones, then imagine how sharply they perceived the message that Turkey was ready to evacuate ardent opponents and detractors of Islam?” Kadyrov said.

“I appeal to Turkish President Recep Tayyip Erdogan: the people of Azov are murderers and atheists, whom they now want to present to you as innocent victims of Russian aggression. Do not let yourself be deceived by criminals who want to avoid trial and well-deserved punishment with your help,” his message concluded.

Ukraine’s Deputy Prime Minister Iryna Vereshchuk said last week that the country is working with Turkey, the Red Cross, and the United Nations on an evacuation plan for the wounded fighters trapped in the steel plant.

In a controversial video clip shared by the Azov Battalion early in the war, Azov fighters were seen reportedly dipping bullets in pig fat in preparation for Chechen Muslims to invade Ukraine. Before the war, in 2019, Facebook had banned any posts praising the far-right regiment, only making a “narrow exception” allowing praise of the group since the Feb. 24 invasion “strictly in the context of defending Ukraine, or in their role as part of the Ukraine National Guard,” a spokesperson from Facebook’s parent company, Meta, told Business Insider.

For his part, Kadyrov, one of Russian President Vladimir Putin’s top allies, has made several threats and wild accusations toward Ukraine and Ukrainian supporters since Russia’s Feb. 24 invasion.

Last month he accused Ukrainian President Volodymyr Zelensky of having schizophrenia after Zelensky said his country was prepared to fight Russia for 10 more years if necessary. In his message, Kadyrov added, “We will finish with you one of these days.”

After Russian troops withdrew from Kyiv in April, and the Donbas offensive began, Kadyrov warned that Russian forces would eventually conquer the capital city and “all” cities in Ukraine.

The Chechen leader has also gone after Elon Musk, warning the SpaceX and Tesla CEO in March that Putin would beat “the hell out” of him. Kadyrov made the comment after Musk challenged the Russian president to a judo match on social media.