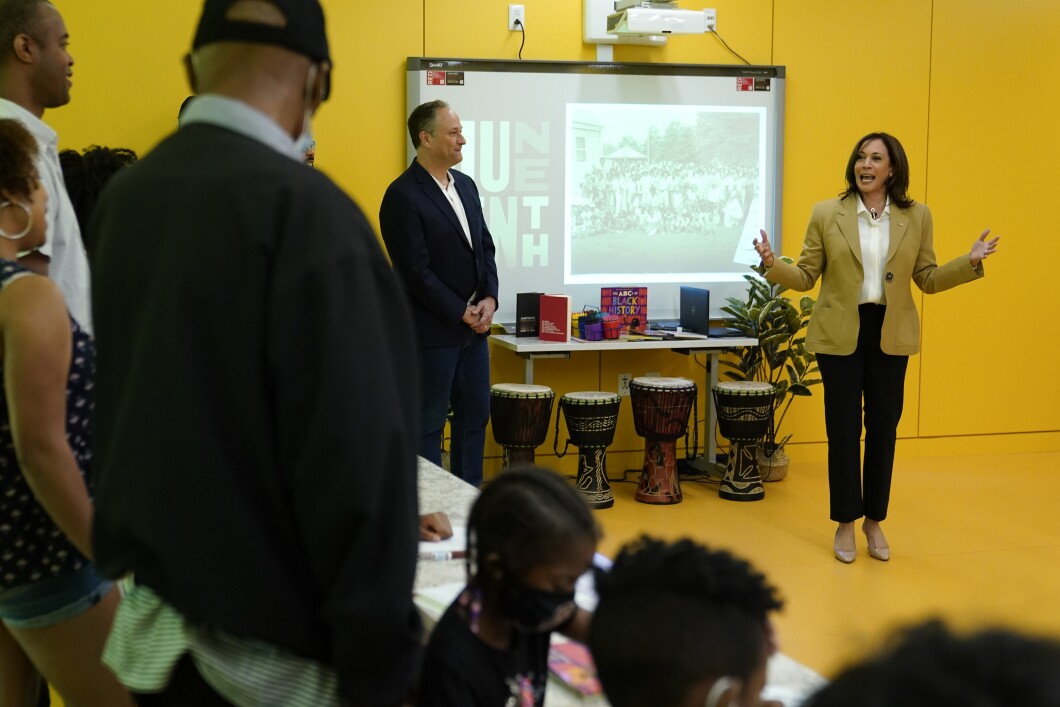 Vice President Kamala Harris surprised a group of school children at the National Museum of African American History and Culture to celebrate Juneteenth.

Vice President Kamala Harris surprised a group of school children at the National Museum of African American History and Culture to celebrate Juneteenth.

Harris explained to the group of students in Washington, D.C., that Juneteenth, which takes place on June 19, is a time to celebrate freedom in the United States. It became a federal holiday last year, marking the day in 1863 when the last slaves in Texas learned they were all free, effectively ending slavery in the country.

WHY WE SHOULD EMBRACE A HOLIDAY COMMEMORATING THE END OF SLAVERY

“Today is a day to celebrate the principle of freedom,” Harris said, according to the Hill. “And think about it in terms of the context of history, knowing that black people in America were not free for 400 years of slavery, but then at the end of slavery — right? — when that declaration happened, when the Emancipation Proclamation happened, that America had to really think about defining freedom.”

Harris added that she believes freedom is a God-given right that was stolen during slavery.

President Joe Biden signed legislation last year to make Juneteenth a federal holiday. It became the first federal holiday to be established since Dr. Martin Luther King Jr. Day in 1983, according to the New York Times.

“The promise of equality is not going to be fulfilled until we become real — it becomes real in our schools and on our main streets and in our neighborhoods,” Biden said during the signing ceremony last year. Harris noted that throughout history, Juneteenth “has been known by many names: Jubilee Day, Freedom Day, Liberation Day, Emancipation Day,” before it became a national holiday.

Juneteenth was on Sunday but was observed by the federal government on Monday. Biden released a statement to mark the holiday.

“This is a day to celebrate, to educate, and to act,” Biden said. “As we mark Juneteenth, my administration will continue our efforts to root out inequity from our country and institutions and ensure true liberty and justice for all.”

Harris was accompanied by her husband, second gentleman Doug Emhoff, who said the museum is a favorite location of his in D.C.

Harris herself made history by becoming the first woman, first black person, and first Asian American to hold the office of vice president.