Is there any elected politician (who's not currently a senile old man) who is a worse speaker than Kamala Harris?

“We’d like you to give a speech.” That statement sends many people into panic mode. As Jerry Seinfeld once explained:

According to most studies, people’s number one fear is public speaking. Number two is death. Death is number two. Does that sound right? This means to the average person, if you go to a funeral, you’re better off in the casket than doing the eulogy.

But then you have the people like Kamala Harris who are perfectly willing to speak in public but are utterly incompetent at it. It doesn’t have to be that way. I know that personally because giving a good speech is a learned skill that I mastered. Kamala would benefit from a “Public Speaking 101” class.

When my pet-sitting business took off, I was asked to give two speeches at an annual conference for professional pet sitters. Not wanting to talk word salad gibberish, I immediately joined Toastmasters. With the support of seasoned Toastmasters members, I improved my public speaking skills. I also discovered that I enjoyed it, viewing public speaking as entertainment.

A year after starting at Toastmasters, when I gave my first 90-minute speech, a respectable paying audience of 50 people attended. Two days later, nearly 300 paying guests showed up at the same conference to hear my second 90-minute presentation. I was animated, self-assured, took questions, and enjoyed myself.

If I could enhance my public speaking skills, so can Kamala Harris. Every day millions of Americans attend programs to improve their public speaking skills. It might be to give a presentation at work, speak at a city council or school board meeting, run for local office, or give a toast at a wedding. Whatever the reason, the goal is to speak coherently and with confidence.

Certainly, Joe Biden and Kamala Harris, the two leaders of the Free World, should be able to speak coherently in public. Some observers give Joe Biden a pass on his frequent ludicrous ramblings believing that he suffers from dementia or another mental acuity issue. Others wonder if Doctor Jill Biden ignores Joe’s obvious mental issues because being First Nurse (aka First Lady) is more important than protecting her husband’s dignity. Of course, this ignores the fact that the frail and mentally challenged Biden sits in the Oval Office with his finger on the nuclear button. 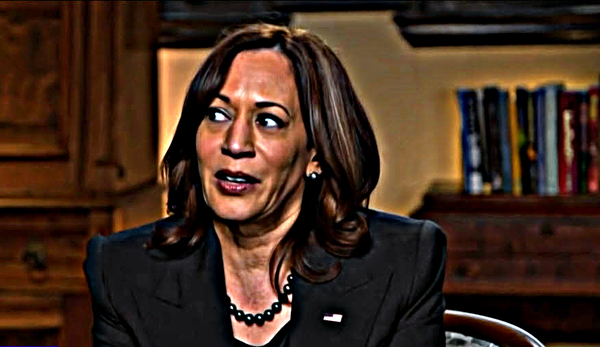 But Vice President Kamala Harris, who many say achieved her current position by way of gender and color rather than merit, has no excuse for her disastrous public speaking. She can’t claim dementia for her frequent word salads—and it’s not racist to point out she can’t form intelligible sentences. For example, at the recent Association of Southeast Asian Nations (ASEAN) Summit, Harris said:

When Harris isn’t talking gibberish or cackling, she sounds infantile. Speaking on the The Morning Hustle radio show in March, Harris spoke in a childlike voice about the escalating Russia-Ukraine situation:

At the Children’s National Hospital in Washington on May 23, Harris “eloquently” said:

Celebrating Juneteenth on June 20 at the National Museum of African American History and Culture in Washington, Harris’s uncomfortable body language accentuated her stumbling:

I think that we all know today is a day to celebrate the principle of freedom. And think about it in terms of the context of history, knowing that black people in America were not free for 400 years of slavery.

Let this be a day that is a day to celebrate the principle of freedom, but to speak about it honestly and accurately, both in the context of history and current application.

How could America have 400 years of slavery when the nation will be 246 years old on July Fourth and when slavery existed in America only from 1783, when America came into existence, to 1865? Speakers always check the accuracy of any facts they present.

No one should be surprised that the leftist media ignores Harris’s word salads. This is the same progressive media that often mocked former First Lady Melania Trump who coherently speaks five languages: Slovenian, English, French, German, and Italian.

Harris has no excuse for her failure to articulately speak in public. Even now, she could take private lessons or call Toastmasters for a club near her D.C. home.

It’s no wonder that Harris has a worse “approval” rating than Biden. Her frequent incomprehensible ramblings embarrass most of us including the 81 million Americans who voted for this failed administration.

Robin Itzler can be reached at [email protected].