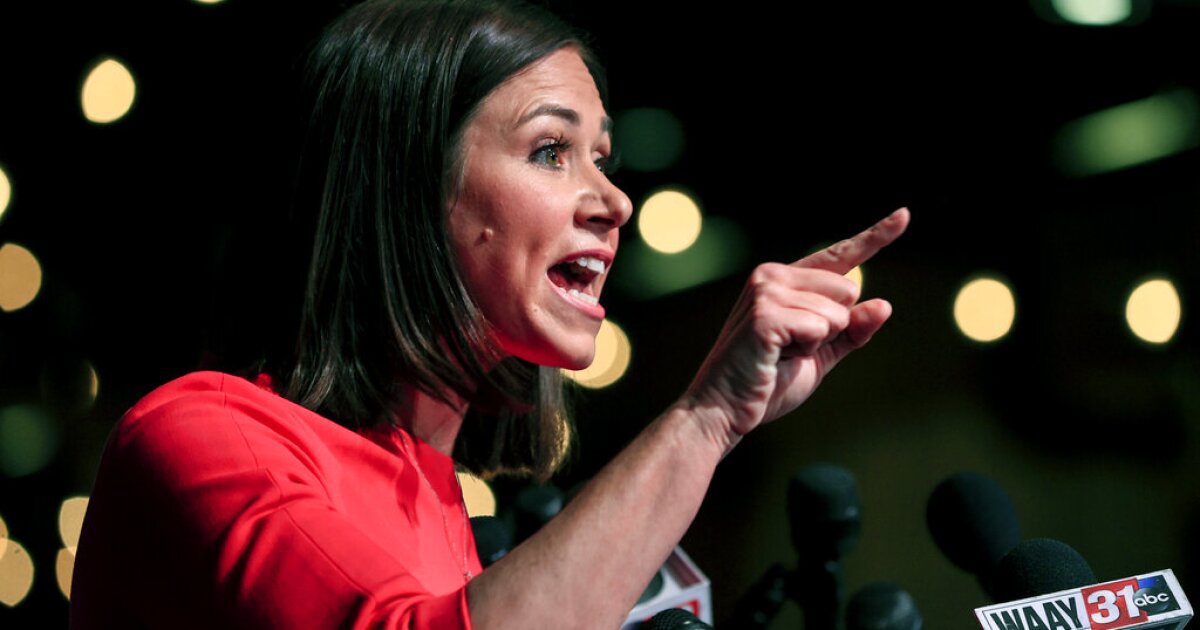 DALEVILLE, Alabama — Katie Britt never mentioned her opponent, Rep. Mo Brooks, or former President Donald Trump as she closed out her runoff campaign for the Republican Senate nomination a stone’s throw from her hometown in southeastern Alabama’s rural wiregrass region.

DALEVILLE, Alabama — Katie Britt never mentioned her opponent, Rep. Mo Brooks, or former President Donald Trump as she closed out her runoff campaign for the Republican Senate nomination a stone’s throw from her hometown in southeastern Alabama’s rural wiregrass region.

In front of lifelong friends, family, and extended family who packed a dining hall at McLin’s, a popular local catfish restaurant, Britt ticked off a laundry list of priorities she plans to address as the successor to retiring Sen. Richard Shelby (R): business deregulation and support for the domestic agriculture and energy industries, “standing with Israel” and “holding China accountable,” education reform, and bringing down inflation.

“I would be the only mom with school-age children on the Republican side of the aisle,” Britt, 40, said earlier Monday evening during an interview with a local TV station as the crowd of about 150 looked on, an attempt to emphasize her focus on inflation, the foremost issue on voters’ minds.

TRUMP THINKS HE ‘WOULD WIN’ A PRIMARY FIGHT WITH DESANTIS

But mostly, a visibly emotional Britt talked about her roots in nearby Enterprise and the surrounding environs in the culturally and politically conservative wiregrass, declaring she would not be on the precipice of winning a seat in the Senate if not for the values and work ethic instilled in her by her community. “I am so proud to be from here,” Britt said twice.

That was the only line Britt uttered more than once during an extemporaneous 10-minute speech that she capped off with a reminder to vote Tuesday and help her campaign maximize local participation in what was expected to be a low-turnout Senate runoff statewide. Britt needn’t worry. Recent public opinion polls were showing her leading Brooks even before Trump endorsed her June 10.

When Brooks launched her campaign about a year ago, few Republican insiders thought the former Shelby chief of staff could win the nomination.

Brooks had been endorsed by Trump and was considered a shoo-in in Republican-leaning Alabama, among the most pro-Trump states in the country. But Brooks visited all 67 counties, chipping away at Brooks’s lead in the polls until she finally surpassed him earlier this year, prompting Trump to withdraw his endorsement of the congressman. Britt’s campaign eschewed interviews with the national press and focused instead on engagement with local media.

Her supporters say she simply outworked Brooks. “When Katie does something, she gives her all,” said Melissa Parker Paul, who along with her husband runs a family-owned retail clothing store in Enterprise that was founded by her parents in 1949. “Katie is just that good.”

As supporters dined on garden salads and catfish, Britt worked the room, visiting for minutes at a time with nearly every attendee. She was joined in that effort by her parents and husband, Wesley Britt, who played football at the University of Alabama and in the NFL.

Only once, toward the end of her remarks to the full room, did Britt make the slightest of references to Brooks, a 68-year-old veteran politician whose featured final campaign event Monday evening was a tele-town hall headlined by Sen. Rand Paul (R-KY).

“We need new blood, we need fresh blood,” she said, echoing a line her supporters are fond of using to promote her campaign to replace Shelby, 88, who has been in office since 1987. “It’s time for the next generation.”