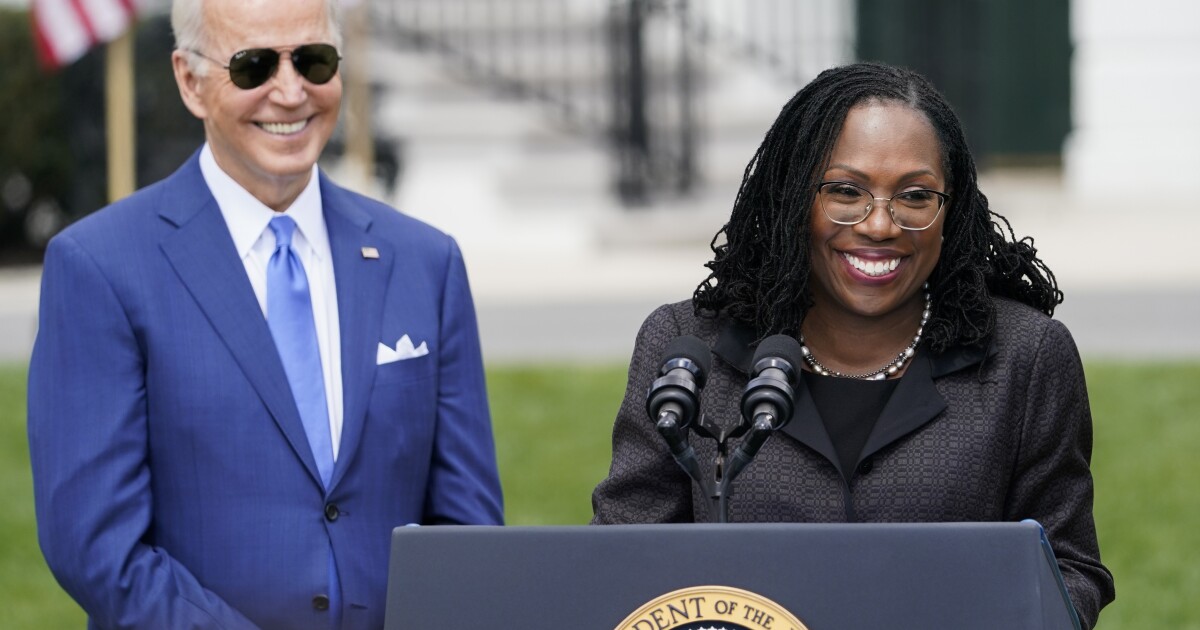 Justice-designate Ketanji Brown Jackson indicated that she was "shocked" by the leaked Supreme Court draft decision that would spell the end of Roe v. Wade.

Justice-designate Ketanji Brown Jackson indicated that she was “shocked” by the leaked Supreme Court draft decision that would spell the end of Roe v. Wade.

“Everybody who is familiar with the court and the way in which it works was shocked by that. Such a departure from normal order,” she told the Washington Post in an interview published Monday.

Jackson, 51, declined to answer whether the leak is a “good thing or a bad thing” and said she does not “have any comment” on the protests outside the homes of several Supreme Court Justices.

Last month, the Senate confirmed Jackson, the first black female justice, to the high court to replace retiring Justice Stephen Breyer, 83. Jackson said she feels prepared for the “momentous” role but emphasized there is some pressure in being the first.

“I’m embodying this progress that many people feel we’re making by having me appointed to this seat. And so it’s pretty daunting in a lot of ways,” she explained. “I might be the first, but I don’t want to be the last, and it’s on my shoulders to make sure that I leave a good impression so that others can follow.”

She also explained why she became emotional when Sen. Cory Booker (D-NJ) heaped praise on her and declared that she earned a seat on the high court during the hearing.

“It was his entire speech and the point at which it came in the context of the hearing. It had been 18 hours of questioning. I was exhausted and also, in a sense, relieved — it felt like someone understood how difficult it had been and how much this particular position meant to a lot of people,” she recalled.

In addition to fielding questions about the Supreme Court, Jackson revealed her guilty pleasure.

“Survivor. It’s the best show ever,” she declared. “Because it’s like a social experiment. It’s human nature, what do people do when they’re starving and how do they react to one another.”

Some of Jackson’s soon-to-be colleagues on the high court have been less tight-lipped with their thoughts on the leaked decision. Chief Justice John Roberts denounced the leak as “absolutely appalling” and ordered an investigation into the leak. Justice Clarence Thomas similarly ripped the leak as being “tremendously bad” and implied the leak could contribute to a loss of institutional trust in the Supreme Court.

In response to the leaked decision, flurries of protesters have repeatedly converged on the houses of several justices, including Roberts, Justice Brett Kavanaugh, and Justice Samuel Alito, who authored the draft opinion. The demonstrations have raised heightened security concerns and prompted the Justice Department to boost security measures for the justices. Additionally, the Senate passed a bill to ramp up security for the justices and their families last week, which has not yet cleared the House.