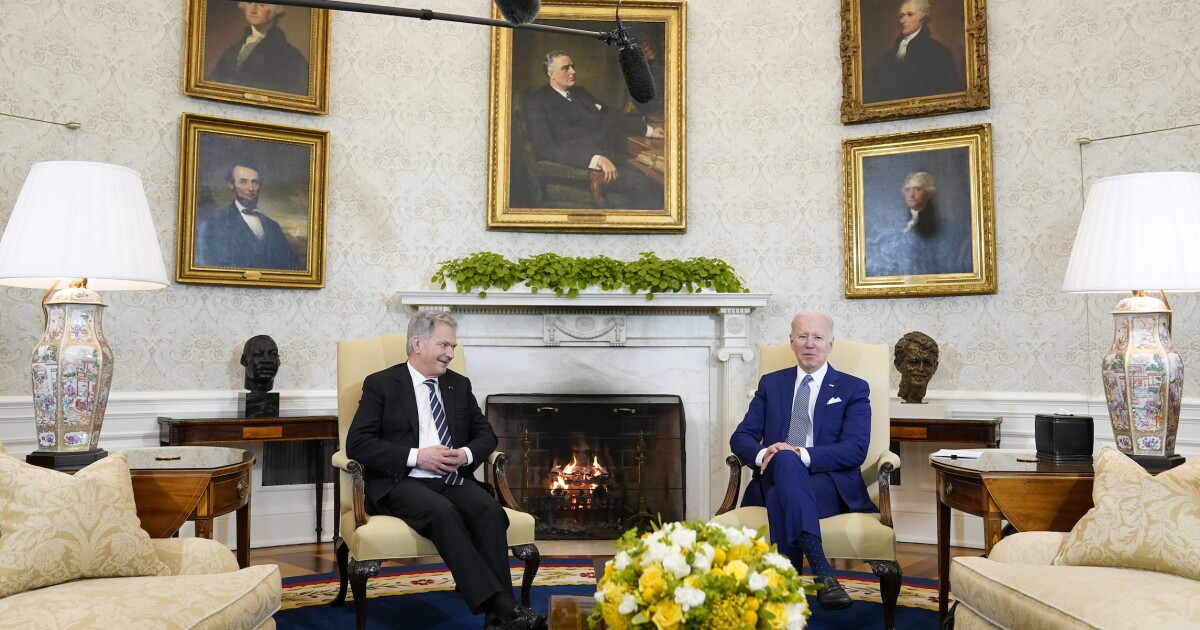 The leaders of Finland and Sweden will meet with President Joe Biden at the White House on Thursday as part of plans for the two nations to join NATO.

The leaders of Finland and Sweden will meet with President Joe Biden at the White House on Thursday as part of plans for the two nations to join NATO.

Swedish Prime Minister Magdalena Andersson and Finnish President Sauli Niinisto will talk with Biden about the two nations’ applications to the defensive alliance as well as broader European security issues in the wake of the war in Ukraine.

“We welcome the recent statements from governments of Finland and Sweden on their intention to seek NATO membership,” White House press secretary Karine Jean-Pierre said Monday. “We will strongly support these applications when they are formally presented in Brussels. Both Finland and Sweden are close and valued defense partners of the United States and of NATO.”

Though both countries are expected to join, a number of factors complicate the situation. One is that Russia, whose president, Vladimir Putin, frequently accuses NATO of creeping toward and threatening his country, is making threats about retaliation.

The Kremlin’s foreign minister warned last week that “Russia will be forced to take retaliatory steps, both of a military-technical and other nature, in order to stop the threats to its national security that arise in this regard.”

While Putin is powerless to stop the move, and likely caused it by invading Ukraine, there is some concern that Russia could act in the interim between the two nations applying and joining NATO. Agreements have been reached with Britain and France to counter this possibility, and it may be one topic of conversation during Thursday’s White House meeting.

“We’re in OK shape on that front because the countries already have bilateral security deals with the United States,” said George Washington University professor Erwan Lagadec. “But for Biden to say that they can already count on support from the U.S. in case Russia should try anything silly, I think that has to be the main deliverable from the meetings.”

The other sticking point is newfound opposition from Turkey, which theoretically could scuttle the deal since adding new NATO members requires universal approval from existing members. Turkish President Recep Tayyip Erdogan voiced opposition last Friday to Finland and Sweden joining the alliance, insisting that the countries were supportive of Kurdish “terrorist organizations.”

A senior Swedish envoy responded, saying Erdogan’s allegations are false and pointing to a “very strong anti-terrorist agenda” while labeling other accusations as “simply not true.”

Erdogan likely doesn’t actually oppose the deal but is instead looking for leverage elsewhere, such as a return to the F-35 fighter jet program Turkey was kicked out of in 2018, argues American Enterprise Institute senior fellow Elisabeth Braw.

“It wouldn’t be Erdogan if he didn’t try to exploit a situation to extract concessions,” Braw said. “Who knows what’s in his head? But there will be a price for Turkey’s approval and ratification of Sweden and Finland joining NATO, and the U.S. has a role to play in figuring out what the prize is — and possibly paying it.”

That’s not to say the United States is simply doing a favor for the Nordic nations. Each represents a strong democracy with a top-notch economy and impressive defense capabilities in their own right. This is especially true for Finland, Braw added, which shares a long border and a long history with Russia that dates back centuries.

But U.S. help navigating the NATO deal may lead Sweden and Finland to join without trying to place any conditions on their membership.

Secretary of State Antony Blinken said Sunday he’s confident in a NATO consensus on the two countries signing on. For his part, Biden was circumspect when asked about the situation last Friday.

“I’m not going to go into the detail of my private conversations with the president of Sweden and Finland, except that we had a good conversation and they expressed their interest and desires relating to security,” he said. “And there will be more to report on that shortly.”

Both Lagadec and Braw say Finland and Sweden to NATO is basically a done deal and would not have advanced this far if it wasn’t. The two countries already were strong NATO allies whose calculus changed with the Feb. 24 invasion of Ukraine. Suddenly, the prospect of war in Europe was real, and the prospect of joining the alliance became much more appealing.

“In order to join NATO, you need to look good in terms of contributing to the alliance and not being embroidered in domestic and external conflicts,” said Lagadec. “You need to be consistent with NATO values. On all counts, Sweden and especially Finland are already there.”