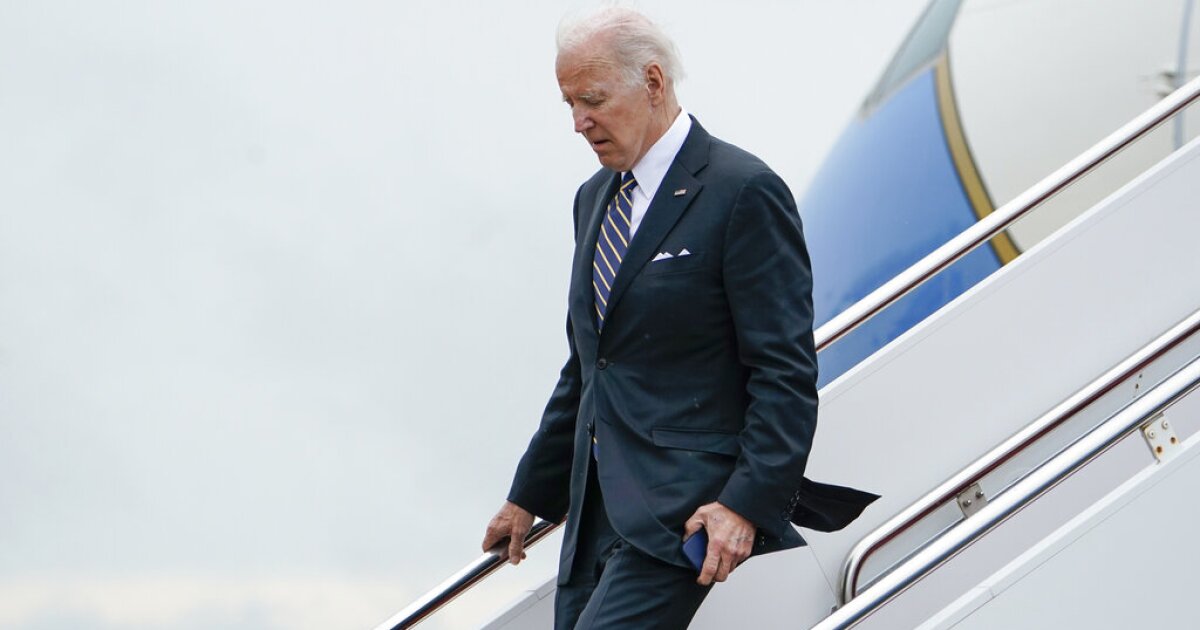 When President Joe Biden arrived in his home state of Delaware on Friday, he was greeted by new calls to enact a student loan debt forgiveness plan that goes far beyond his campaign pledge.

When President Joe Biden arrived in his home state of Delaware on Friday, he was greeted by new calls to enact a student loan debt forgiveness plan that goes far beyond his campaign pledge.

The NAACP took out a full-page advertisement in the Wilmington News Journal before Biden’s commencement address at the University of Delaware.

The university is not just Biden’s alma mater but also a key data point in the case for student loan forgiveness made by Sen. Elizabeth Warren (D-MA), a prominent liberal voice calling for the outright cancellation of up to $50,000 in student loan debt per borrower.

Student debt forgiveness is not regressive, Warren has argued, a point she says is illustrated by the 55% of University of Delaware students who borrow money to go to school. Compare this to the 2% of Harvard students who take out federal loans, she told the Atlantic in a recent interview.

Warren has made this school-specific appeal to Biden directly, outlining a cost to Democrats if they go small, according to a report from CNN that said the president is still weighing a final decision on the matter but is likely to include income caps on who can qualify.

In an op-ed for the New York Times last month, the senator drew the through line to November: “If we fail to use the months remaining before the elections to deliver on more of our agenda, Democrats are headed toward big losses in the midterms.”

Alternatively, she said, “With the stroke of a pen, the president could make massive strides to close gender and racial wealth gaps.”

The White House has not announced a plan, but Biden backed a proposal to forgive at least $10,000 per borrower during the 2020 campaign. “It should be done immediately,” he said then as president-elect.

After more than a year in office, pressure on Biden to make a final determination over the issue is bubbling over. He said in April that he would finalize his decision in the “next couple of weeks” and has twice extended the pandemic moratorium on loan repayments.

According to the Department of Education, more than 42 million people hold student loan debt — for a total the Federal Reserve estimates is more than $1.7 trillion.

Biden has already canceled some student loans, but the prospect of expanding the plan to include a broader swathe of borrowers is drawing criticism from multiple sides.

Economists have warned that going further could make inflation worse as concerns over prices reach their highest level since the 1980s.

Meanwhile, proponents of student debt forgiveness have said Democrats need something to show voters ahead of the midterm elections.

The White House has declined to say whether it has analyzed the effect on inflation. But new reports suggest the administration is eyeing a narrower scope than the party’s left flank has urged.

The Washington Post reported Friday that the White House’s latest plan would limit the debt forgiveness to $10,000 for people making under $150,000, or $300,000 for married couples.

The White House did not respond to a request for comment on Biden’s decision or a timeline for the announcement.

Like Warren, other proponents of student debt forgiveness say Biden should go much further, arguing that the heaviest burden falls on black and Hispanic borrowers.

On Friday, NAACP President Derrick Johnson said, “Canceling $10,000 in student loan debt is like pouring a bucket of ice water on a forest fire.”

“The average Black borrower has $53,000 in student loan debt four years after graduation, nearly twice the amount as their white counterparts,” Johnson wrote in a statement, calling the $10,000 amount “a slap in the face.”

“The Black community will be watching closely when you make your announcement, but $10,000 is not enough,” he added.

Biden, while under pressure from liberal activists, faces other electoral considerations.

Eliminating $10,000 worth of debt per borrower would cost at least $230 billion, with more than two-thirds of the benefit aiding earners in the top half of the income spectrum, according to estimates by the Committee for a Responsible Federal Budget, a nonpartisan think tank.

Their analysis states that it would add to already record-high inflation. It is also expected to invite legal scrutiny.

The prospect has drawn pushback from some Democrats, with Paul Begala, a former adviser to President Bill Clinton, calling the push a “loser issue” for Biden.

“Somehow, in my lifetime, my party, the Democrats, have gone from being the party of the factory floor to the party of the faculty lounge,” Begala said during an appearance on HBO’s Real Time with Bill Maher. “Last week, I spent a day with the Machinists Union in Chicago. Great guys. Not one of them came up to me and said, ‘Please take my tax dollars to pay off the debt of someone who went to Stanford.’”

Inflation is expected to persist into the coming year, eating into people’s budgets as they head to the polls.

Surveys show that high prices for everyday goods and gas continue to top the list of voters’ concerns.

Sixty-nine percent of people polled by CBS News/YouGov last week said the economy was bad, up from 46% in April 2021.

And in a possible warning to Democrats and Biden, people were pessimistic about inflation, the stock market, and the economy’s direction.