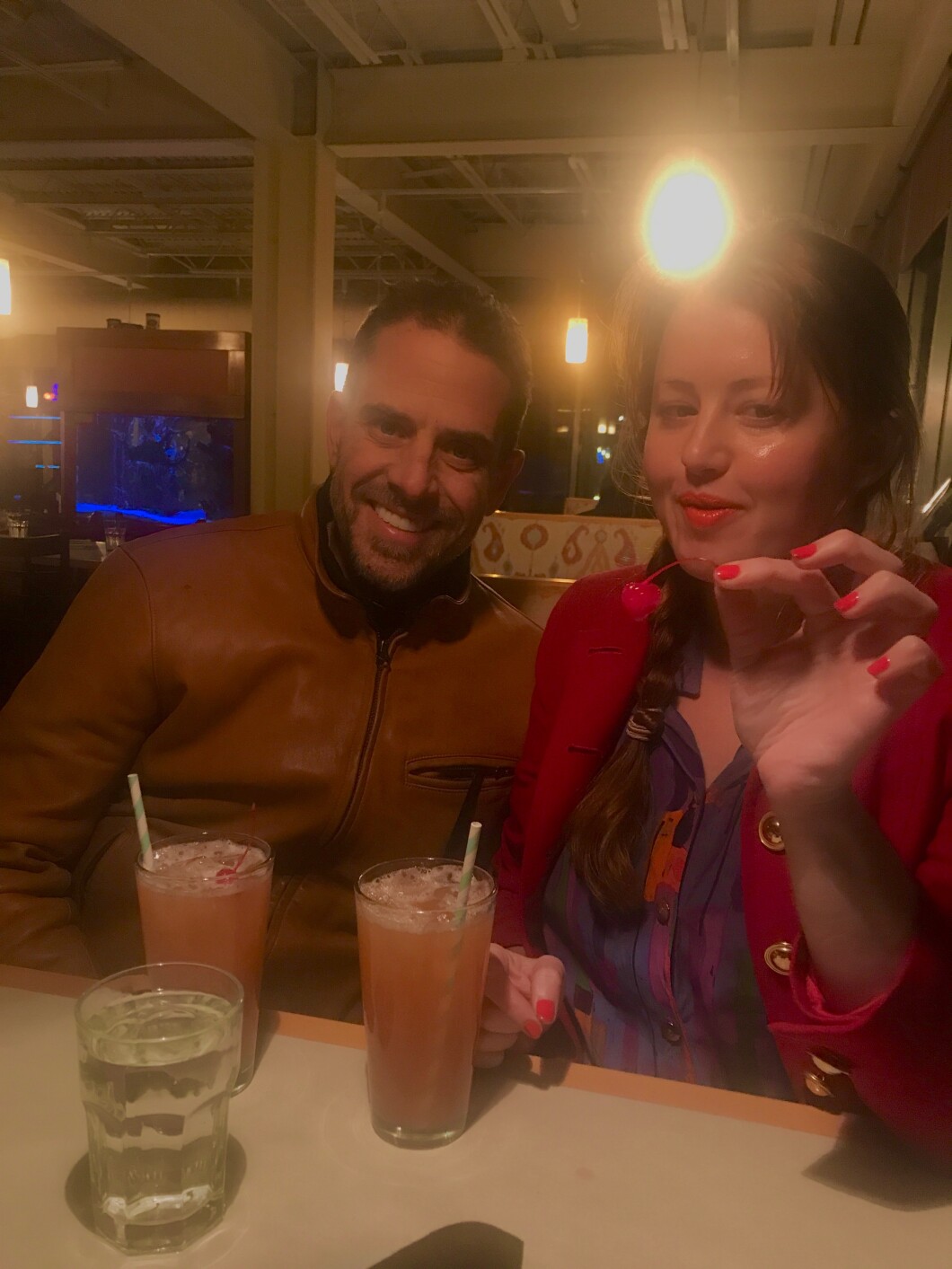 Hunter Biden recorded himself boasting that his father will adopt political positions at his command, footage obtained from a copy of his abandoned laptop shows.

Hunter Biden recorded himself boasting that his father will adopt political positions at his command, footage obtained from a copy of his abandoned laptop shows.

“He’ll talk about anything that I want him to, that he believes in,” Biden said in reference to his father, Joe Biden, in the Dec. 3, 2018, recording. “If I say it’s important to me, then he will work a way in which to make it a part of his platform. My dad respects me more than he respects anyone in the world, and I know that to be certain, so it’s not going to be about whether it affects his politics.”

“All those fears you think that I have of people not liking me or that I don’t love myself … I don’t fear that. You know why I don’t fear that? Because the man I most admire in the world, that god to me, thinks I’m a god,” Hunter Biden added in the 77-minute recording, which was taped about five months before Joe Biden launched his successful 2020 presidential campaign in late April 2019. “And my brother did, too. And the three of us, it was literally — I had the support to know I can do anything.”

The recording was located on a copy of Hunter Biden’s abandoned laptop within a password-protected backup of his iPhone XS. Konstantinos “Gus” Dimitrelos, a cyber forensics expert commissioned by the Washington Examiner, located the password during his examination of the hard drive.

In the recording, Hunter Biden bragged to his friend, British artist Phillipa Horan, that he was “better than anybody you know” as the pair discussed matters ranging from Joe Biden’s presidential aspirations, Hunter Biden’s struggles with addiction, an art project the two were working on together, and philosophical musings on how to live a fulfilling life.

The conversation was taped at a house in Plum Island, Massachusetts, amid the throes of Hunter Biden’s addiction to crack cocaine.

“Have you ever thought about this: Maybe this is the greatest thing that f****** ever happened to me,” Hunter Biden mused to Horan about his addiction to the Schedule II narcotic. “Maybe this is literally the continuation and the continuum of what is going to be the thing that makes me the person that my father believes I am.”

Horan asked Hunter Biden at one point in the recording what his father says about his crack addiction.

During the discussion, Horan asked Hunter Biden if his father would talk about drug reform if he becomes president.

“He’s going to talk about drug reform and any other things that I want him to,” Hunter Biden responded.

Hunter Biden foretold his notoriety would rise if his father won the 2020 presidential election and said they could parlay that attention to promote an art project he and Horan were working on together.

He said a personal story Horan told him “will literally be a f****** blip in a f****** radar fucking screen as compared to my presence if my dad becomes president of the United States.

“You will have attention,” Hunter Biden added. “I have figured out a long time ago, if you’re going to be involved in politics the way that I am, which is to choose to engage with my father in that life because I believe in what he does — if you’re going to, one of your obligations is to use that platform with intent, is to not allow the platform to sit on top of you.

“I was on the front page of every newspaper including the f******, I mean, the Wall Street Journal, the New York Times, not just the Tatler,” Hunter Biden continued, referencing a British fashion magazine.

Portions of this audio were reported on by the New York Post and played by Newsmax. Both outlets said they obtained the information from the Marco Polo research group.

While Hunter Biden’s art project with Horan doesn’t appear to have come to fruition, he successfully reinvented himself as an artist following Joe Biden’s presidential inauguration.

Hunter Biden has sought upward of $500,000 for his art, and he sold at least five pieces of artwork for $75,000 each at an exhibition in October, raising concerns that his anonymous buyers may have been trying to curry favor with the White House.

Other records found within the encrypted iPhone XS backup on Hunter Biden’s abandoned laptop show he claimed to advise his father frequently on political matters.

“Been on calls with Dad most of day,” Hunter Biden texted his psychiatrist, Keith Ablow, on Dec. 16, 2018. “Talking what’s next with political team. Slot of polls that are way outside the norm for anyone in the last 20 years of presidential politics.”

Hunter Biden also solicited assistance from Google on how to make crack cocaine three days after he claimed to have advised his father on political matters.

“I think I put too much baking soda in my mix with cocaine to make crack how do I fix it,” Hunter Biden searched Google at 7:23 a.m. on Jan. 19, 2019, according to records found within the encrypted iPhone XS backup folder on a copy of his abandoned laptop.

Hunter Biden demonstrated that he had at least some influence over his father’s public appearances and scored Joe Biden a promise of political support.

Michael Karloutsos, the son of the Rev. Alex Karloutsos, leader of the Greek Orthodox Archdiocese of America, reached out to Hunter Biden in mid-October 2018 about having Joe Biden appear at an award ceremony later that month. A week later, Michael Karloutsos told Hunter Biden that a “Cathy” or “Kathy” from Joe Biden’s office had said the future president wouldn’t be able to make the event. Hunter Biden replied, “I will [f******] kill her. Hold.”

Hunter Biden soon texted Michael Karloutsos that Joe Biden was in Florida at a campaign rally but that he was “calling me as soon as he is out” and that “unless he (himself) said no b/c of some health or family reason I will make this right.” Hunter Biden soon said, “It will happen. Just spoke to him.”

A couple of days later, Michael Karloutsos texted, “We tried. I’m grateful. Thank you.” Hunter Biden was taken aback, replying, “Excuse? We are coming I’ll be there also?” Michael Karloutsos then said Joe Biden’s office had again said the elder Biden couldn’t do it. Hunter Biden replied, “WTF she is crazy call me … We are coming I’ll take care of it don’t cancel plane for him … We are doing it.”

The 2019 annual report for the Order of St. Andrew detailed Joe Biden’s appearance at the event, saying, “Former Vice President Biden made a surprise visit to Athenagoras Human Rights Award Banquet, and offered remarks.” The remarks included Joe Biden thanking “Father Alex” and his wife for their support during the illness and death of Beau Biden, saying, “Your family is family to the Biden family.”

Alex Karloutsos texted Hunter Biden a few days after the event in early November 2018, saying, “Your Dad and you humbled us and honored us with both your presence and love. We are grateful. Thanks my friend … We love and respect the Bidens and we are LOYAL to the end. I want to talk about the Greek American Community, Democrats and Republicans, in support of your Dad.”

“We have great confidence in our son. I am not concerned about any accusations made against him. It’s used to get to me. I think it’s kind of foul play,” Joe Biden said of his son. “But look, it is what it is, and he’s a grown man. He is the smartest man I know — I mean from a pure intellectual capacity. And as long as he’s good, we’re good.”