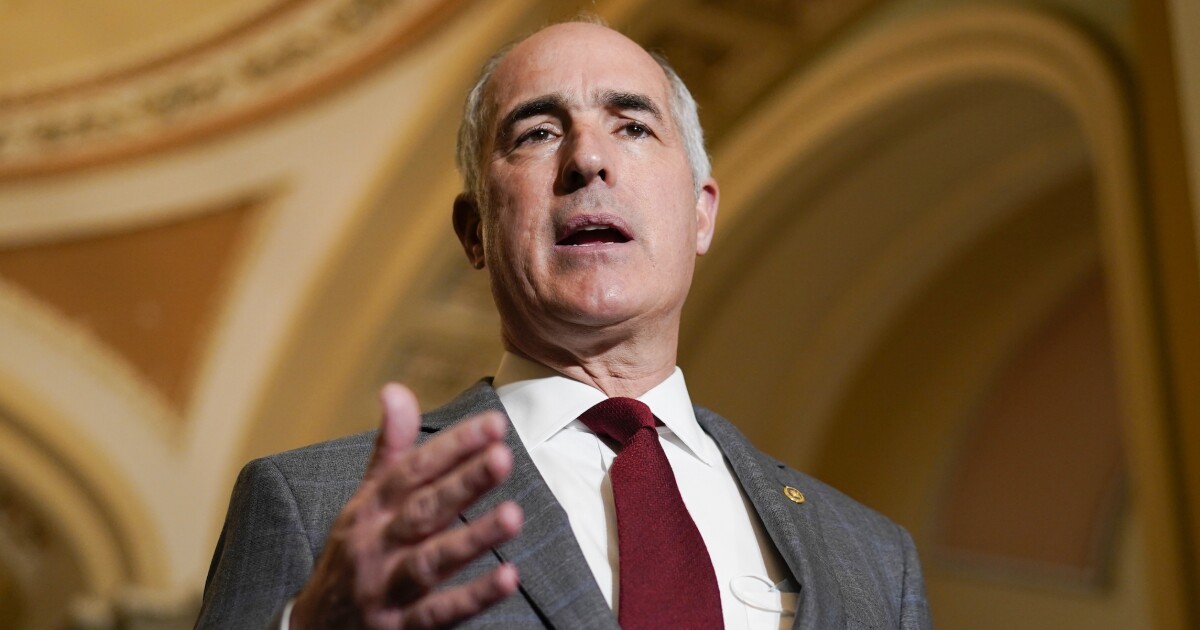 Casey said Tuesday that he would vote in favor of the Women’s Health Protection Act, which Democrats are advancing in reaction to the news of the draft opinion overturning the 1973 Roe v. Wade decision legalizing abortion nationwide. The bill would go further than Roe and would guarantee access to abortion through viability and beyond, if a medical provider determined it was necessary, and would also cancel state laws limiting access to abortion.

Casey’s stance is new in that he explicitly said he would vote for the final passage of the bill. He had previously voted to move to final consideration of the bill when Senate Majority Leader Chuck Schumer brought it up in February, but the measure did not get the 60 votes required to end debate and overcome any filibusters. A similar outcome is expected when Schumer brings up the bill again on Wednesday, but Casey outlined his support for final passage anyway.

SANDERS RENEWS ‘MEDICARE FOR ALL’ PUSH WITH CONGRESSIONAL HEARING

“In light of the leaked Supreme Court decision draft overturning Roe v. Wade and subsequent reports that Republicans in the U.S. House and Senate will introduce legislation to enact a nationwide six-week ban, the real question of the moment is: Do you support a categorical ban on abortion?” Casey said Tuesday. “During my time in public office, I have never voted for, nor do I support, such a ban.”

Manchin has not said how he will vote Wednesday, but he voted against ending debate and moving to passage of the bill in February and was the only Democrat to do so. Manchin, who has called himself “a lifelong abortion opponent,” is a key swing vote in the Senate.

Schumer is moving toward the vote with the intention of putting Republicans on record as being opposed to abortion rights, a move that Democrats hope will help them in the November midterm elections.

Casey has in the past voted in favor of GOP-led legislation to limit abortion in the later stages of pregnancy, such as a ban on the procedure at 20 weeks, just a few weeks earlier than the current law allows. He most recently voted in favor of legislation that would mandate medical care for infants born after botched abortions.

The broader Democratic Party has moved left on abortion. Casey’s father, former Pennsylvania Gov. Bob Casey Sr., was one of the country’s most high-profile anti-abortion Democrats. As governor, he signed a bill into law in 1989 that imposed a 24-hour waiting period before an abortion and required married women to notify their husbands. The law resulted in the landmark case Planned Parenthood v. Casey, in which the Supreme Court ruled 5-4 to uphold Roe while allowing state restrictions if the fetus was developed enough that it could survive outside the womb and the restrictions did not place an “undue burden” on women.

“How far today’s Democratic Party has fallen from the time when Sen. Casey’s father would courageously stand up to the abortion lobby,” Susan B. Anthony List President Marjorie Dannenfelser told the Washington Examiner. “In 2020, Sen. Casey voted to protect unborn babies from painful late-term abortions, but now, he has fully caved to Biden, Schumer, and other pro-abortion extremists in his party with his vote to enshrine a virtually unlimited abortion ‘right’ in federal law. His support for abortion-on-demand until the moment of birth is disgracefully out of touch with Pennsylvanians and most of America.”

Casey ran successfully for Senate in 2006 on an anti-abortion platform but has not always voted in favor of anti-abortion measures. He has earned high marks from abortion rights groups for his voting record. For instance, NARAL Pro-Choice America issued him a score of 72% in 2020, while Planned Parenthood gave him a 62%. Manchin, meanwhile, was given a 48% from NARAL and a 43% from Planned Parenthood.

Wednesday’s vote on the legislation is a result of a leaked draft opinion from the Supreme Court last week that signaled the conservative majority’s intention of overruling Roe.

“If this draft opinion becomes the final opinion of the court, I have serious concerns about what overturning almost 50 years of legal precedent will mean for women in states passing near or total bans on abortion,” Casey said following the leak. “Congress should be working to reduce the number of abortions and unintended pregnancies and doing much more to support women and families.”