Margaret Thatcher was a shrewd and tough politician in more than one way.

Almost immediately after a 20-foot-high bronze statue of Lady Thatcher was unveiled in her hometown of Grantham, Lincolnshire, it was pelted with four eggs thrown by a 59-year-old left-wing protestor, the deputy director of an arts center at the University of Leicester who posted about his action on social media. None hit the monument.

Margaret Thatcher died more than thirty years after she left political office, but she still arouses fierce enmity by political foes as she did during her political career. The egg-throwing reflects the reality that she has left a complex legacy, much loved and much hated.

Thatcher was a conviction politician with a strong, determined, uncompromising style, which offended many, as well as an advocate of her form of British conservatism. Thatcher may be regarded as the most admired and the most disliked British politician of the second half of the twentieth century.

Margaret Thatcher, nee Roberts, born in 1925 in an apartment above her father’s grocery store, studied chemistry at Somerville College, Oxford, worked for a short time as a research chemist developing soft ice cream, and then became a barrister, practicing law for two years. She was elected a Conservative member of parliament in 1959, and was appointed minister of education by Prime Minister Edward Heath in 1970-74. Thatcher in 1975 defeated Heath to become leader of the Conservative party, the first woman to lead a major political party in the UK.

She became prime minister in 1979, the first female in British history to hold that position, which she did for over 11 years, leading the Conservative party to victory in three consecutive general elections. She resigned as prime minister after she was challenged in a coup, a polite conspiracy “Treachery with a smile on its face,” by fellow cabinet colleagues in 1990, and died in 2013, aged 87.

Thatcher was no intellectual, but she knew the importance of ideas and was influenced both by intellectual figures such as Friedrich von Hayek and Milton Friedman, and practical politicians such as Enoch Powell and Geoffrey Howe. In particular, Thatcher was influenced by Friedman’s theory of monetarism, concerned with the role that government should play in the economy, mainly stabilizing the currency, control of money supply, and reducing state intervention, stimulating the economy, and encouraging the growth of business.

Though Thatcher cannot be considered an ideologue, her policies on the economy became known as “Thatcherism.” In this regard she is notable as the first British prime minister to have an “ism” after her name.

Thatcherism was not a coherent, integrated policy, but it was a set of loosely related ideas, meant to strengthen the economy; among them free markets, free trade, deregulation particularly of the financial sector, competition, a small state, and privatization of state-owned companies. Privatization had social as well as economic facets. Thatcher thought ordinary workers could own shares in the company for which they worked. As a parallel, her aim was to increase the number of people who owned their own homes. Thatcher’s declared aim was to revitalize Britain from “a dependent to a self-reliant society from a give-it-to-me to a do-it yourself nation.”

One of Thatcher’s dramatic policies was limiting the power and influence of trade unions and the number of strikes. She won a major political victory by ending the 1984-85 strike of the National Union of Mineworkers. The failure of the strike led to a substantial decline in union membership. 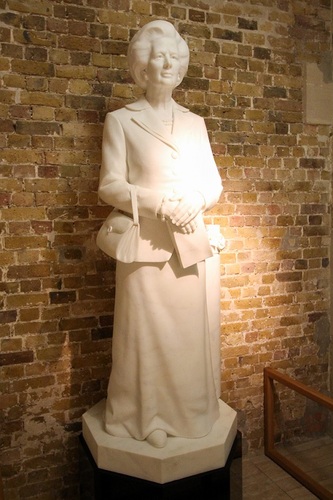 Thatcher was a staunch anti-communist in this period of the Cold War, and on this issue, as well as common economic ideas, she was an ally of President Ronald Reagan. Interestingly, it was a Soviet journalist who coined Thatcher “the Iron Lady.”

Thatcher was active in international affairs, a strong nationalist acting as though Britain was a superpower. She signed the Anglo-Irish agreement that helped lead to the peace process. She made a deal with China over Hong Kong, she opposed Serbian aggression, and thought that “the West could do business with Gorbachev.”

Thatcher was determined to maintain the Falkland Islands and dispatched a naval task force to recapture the islands after Argentina invaded them in an undeclared ten-week war in 1982.

She was critical of the EU, which she regarded as inherently leftist. In a speech in Bruges in 1988 she said that the EU could either try to deepen its union or accept more countries, but not both. She wanted to widen it, and her argument led to accession of ten new members in 2004 followed by two more.

Thatcher did not consider herself a feminist, or become involved in feminist organizations. She was not engaged in the movement for equality for women. Yet she can be regarded as a feminist for three reasons; the first was illustrating that women can be as successful, if not more, as men in hard-working, strong, efficient, courageous leadership. But equally important was that she had to fight off prejudice as being a mother, a housewife, a grocer’s daughter, middle class at best, who came from a family of shopkeepers There was prejudice in the Conservative party and elsewhere against the “grocer’s daughter.” One indication of this was that Oxford university refused to grant her an honorary degree, for reasons perhaps of politics but possibly of snobbery. Thatcher rose above her background and class, climbed to the top of the political ladder, and showed she was as capable, and more, than the upper class that resented her.

The third factor is that Thatcher was a shrewd and tough politician in more ways than one. She was close to Ronald Reagan, she flirted with Francois Mitterrand, with King Fahd of Saudi Arabia, and was friendly with Mikhail Gorbachev. On attaining high office, she changed her speaking style on the advice of Laurence Olivier. She lowered her voice, spoke more slowly, more loudly, enunciated carefully, and stressed key words and phrases. She thus suggested an assertive personality, completely in control of her ideas and policies.

Thatcher’s influence can be seen in the behavior of Liz Truss, current British foreign minister, who has imitated Thatcher by changing her style: adopting lower and slower delivery in speeches. She also seemed to copy Thatcher by posing on a tank and wearing a fur coat and hat while visiting Moscow as Thatcher had done. One language expert, Tony Thorne of King’s College, London, has suggested the changes, in the cases of both Thatcher and Truss, in intonation, voice quality, and speed of delivery have the same motivation, a female showing she is in a position of power.

Margaret Thatcher Day is celebrated annually in the Falkland Islands. She also has a statue opposite one of Winston Churchill in the lobby of the House of Commons. Controversial figure as she was, in death as in life she does not deserve egg on her face.