Will it be bunker day for the rest of the world?

Vladimir Putin invaded Ukraine on February 24 in what his military promised him would be a one-week victorious blitzkrieg. Instead, 2½ months later, nothing is going right. Putin knows that to remain in power, the Russian people must see him as winning his ill-defined “special military operation” in Ukraine. As what the Mafia would define as the “boss of all bosses” in Russia, Putin has no official deadline for success but, in the minds of many Russians, major success is expected by Victory Day, May 9. The question now is this: What is Putin willing to do to demonstrate some sort of victory by that date? Would he go nuclear for a victory by Victory Day?

For Russians, May 9’s Victory Day is their Veterans Day, Memorial Day, and a little bit of our Fourth of July all wrapped into one. It celebrates the Soviet victory over Germany in World War II. To understand the significance of this day, remember that Russians call WWII the Great Patriotic War. That title is well-earned. In the aftermath of Pearl Harbor, the United States lost about 420,000 people in Europe, Africa, and the Pacific. By comparison, 25 million Soviets lost their lives in defense of the Motherland. That’s 60 times our losses.

Despite the official Russian government line that their army is defeating fascists and neo-Nazis in Ukraine, the truth about the failure of Putin’s army is becoming well known. Although no one would dare tell Putin that something must happen by May 9, the Russian dictator is well aware of that feeling in the Kremlin and throughout Russia.

Putin is not going to achieve anything resembling a total victory by that date. Everyone is aware he gave up on conquering Kyiv and concentrated all his forces on capturing Mariupol. The 2,000 undefeated Ukrainian soldiers holding out in the steel plant there are an undeniable signal to every Ivan that the Russian army, which promised to quickly overrun an entire country, can’t even evict a brigade of Ukrainians from the twisted wreckage of a large factory.

Putin’s latest tactic is a nonstop missile barrage targeting the steel plant. The impact of the warheads has turned the enormous former factory into a tangled wreckage of rusting steel stretching as far as the eye can see. But that may be a serious tactical error and a repeat of a problem that stalled the Allied war effort in Italy almost 70 years ago.

As the Allies marched north in Italy, the old mountaintop monastery at Monte Cassino stopped their advance. Germans on the high ground could fire down on the Americans with virtual impunity. From the rabbits’ warren of buildings surrounding the old monastery, observers for German artillery located miles behind the battle lines could direct that artillery fire onto the Allies below with devastating accuracy.

The Allies withdrew a few miles south so our bombers could reduce the old monastery to rubble. But as the bombs fell, the German troops retreated to the monastery’s cellars. They survived the tens of tons of high explosives dropped on them. The cellars that once held the old monks’ wine provided the Wehrmacht with a bomb-proof overhead cover.

Once the bombing was over, the Germans emerged to find the Allied bombing had given them an even more defensible position. What had been well-ordered buildings was now massive rubble that easily concealed snipers, sappers, and those critically needed artillery observers. 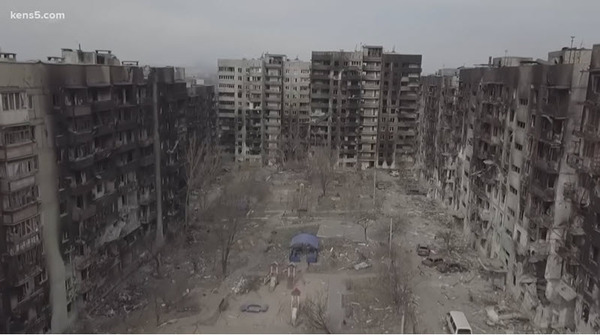 The old monastery’s destruction also gave the Allies another problem. They planned their attack using the pictures of the old monastery. In the aftermath of the bombing, it was nothing more than a huge pile of unknown debris that the Allies had to fight through yard by yard before proceeding further north through Italy. It took five months of bloody assaults before the Polish II Corps could raise their flag atop the ruins of the holy place that had become a hell for the Allies.

Has Putin made the same mistake as the World War II Allied air power planners? By exploding hundreds of his missile warheads, has he turned the Mariupol steel plant into thousands of unknown battle positions for the Ukrainian defenders? As all too often happens in war, have high-tech battle strategies from armchair Kremlin generals made it harder for the individual soldier to conquer the enemy with little more than his low-tech rifle?

If Putin’s army cannot conquer the Mariupol steel plant by conventional means before Victory Day, he faces a hard choice.

By not announcing the Mariupol victory or trying to claim some lesser success as sufficient, Putin is significantly weakened. In Russia, there is no place for weakened leaders. You’re either ultimately powerful or you are gone. It’s not just the reality of power but the perception as well. Even though the Kremlin knew Kennedy gave up our nuclear missiles in Turkey to get Khrushchev to remove his atomic-tipped rockets from Cuba, it made Russia look weak on the world stage. Adios, Nikita.

Gorbachev’s public admission that Russia could not afford the equivalent of the American Star Wars missile defense system drove him from his position of highest power to become a pitchman in Pizza Hut television commercials. No, I’m not kidding about the Pizza Hut commercials. Check out Gorby on YouTube.

Because Putin does not foresee a future flacking fast food, and his conventional forces may not be able to take the steel plant by Victory Day, a question kept the Pentagon leadership awake this weekend: Would a conventional forces failure in Mariupol convince Putin to employ tactical nuclear weapons? No one is expecting megaton city killers, but a small tactical nuclear warhead could be Putin’s only other option. The Russians have highly effective chemical and biological agents, but the assumption is that Ukrainian forces holed up in the factory have protection against that.

Up until now, most people other than headline writers have considered Putin’s rattling of his rockets to be little more than political bombast. Of course, mention the word nuclear, and some European leaders and most American journalists will immediately grab a pacifier, hop into bed, and assume the fetal position.

But this time, Putin cannot just scare people. He must give the Russian people are clear victory or pay a permanent political price. It’s not just the general populace he must convince. The Kremlin power players and the oligarchs who support them must agree Russia will get some sort of a victory in Ukraine without a long-drawn-out war. They realize that, without that victory, the worldwide public perception of Russia and, consequently, their individual power are on the express elevator headed for the basement fast.

The overhanging questions are, “would Putin go nuke”, and if he does, “what would the West’s response be”?

So, as you read this, think about Putin’s actions before Monday ends. No one knows what Monday will bring but many world leaders, if not physically in their bunkers, are definitely adopting a bunker mentality.

Ed Sherdlu is the pen name of a former CBS television network reporter. He uses a pen name because his mother would be so embarrassed to know that Ed’s 12-Step Journalism Recovery Program had been a failure.