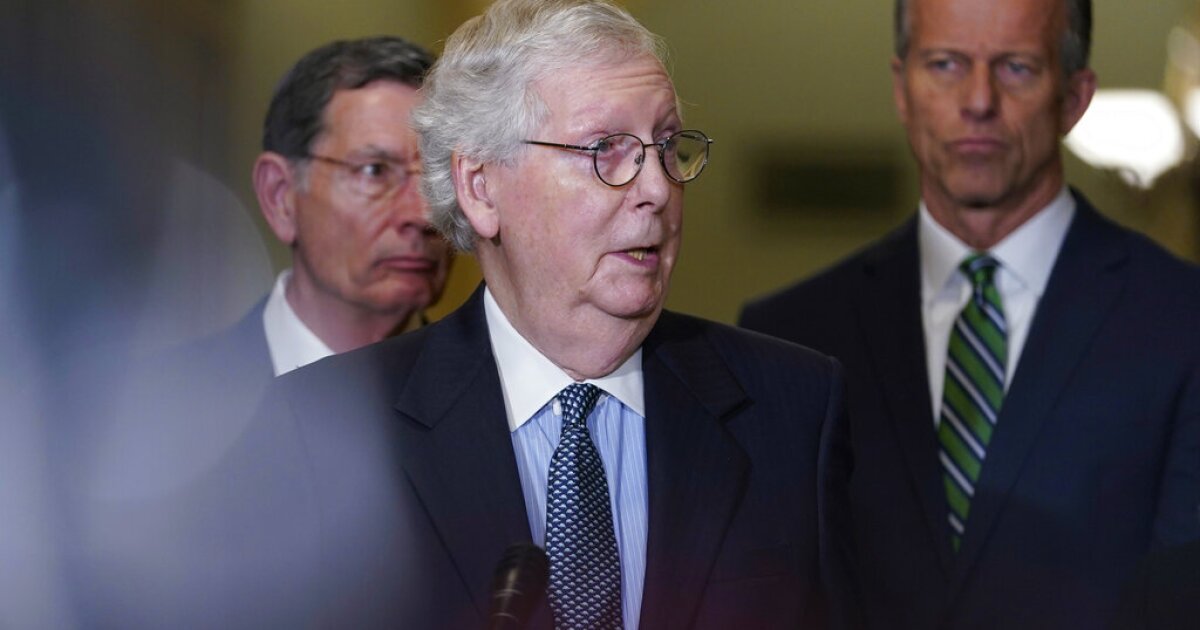 Senate Minority Leader Mitch McConnell (R-KY) is calling for an investigation into the leak of a Supreme Court ruling indicating the high court plans to nullify Roe v. Wade, arguing the move was intended to “bully” judges into changing their positions.

Senate Minority Leader Mitch McConnell (R-KY) is calling for an investigation into the leak of a Supreme Court ruling indicating the high court plans to nullify Roe v. Wade, arguing the move was intended to “bully” judges into changing their positions.

The unprecedented leak of Justice Samuel Alito’s draft of the majority decision to Politico was met with sharp pushback from Republicans, with McConnell calling the breach “an attack on the independence of the Supreme Court.”

“By every indication, this was yet another escalation in the radical left’s ongoing campaign to bully and intimidate federal judges and substitute mob rule for the rule of law. The disgraceful statements by President Biden, Speaker Pelosi, and Leader Schumer refuse to defend judicial independence and the rule of law and instead play into this toxic spectacle. Real leaders should defend the Court’s independence unconditionally,” he said in a statement.

“This lawless action should be investigated and punished as fully as possible. The Chief Justice must get to the bottom of it and the Department of Justice must pursue criminal charges if applicable. All nine Justices should tune out the bad-faith noise and feel totally free to do their jobs, following the facts and the law where they lead.”

The report marks the first time in recent history that a draft of a Supreme Court decision has been leaked.

McConnell reiterated his push for an investigation on Tuesday morning on the Senate floor, arguing that the move hindered the court’s ability to remain impartial and independent and increased the probability of threats against justices.

“Somebody, likely somebody inside the court itself, leaked a confidential internal draft to the press, almost certainly in an effort to stir up an inappropriate pressure campaign to sway an outcome. The radical Left immediately rallied around the toxic stunt,” he said.

“The cheerleaders for partisan court-packing applauded what they suggested was the work of quote ‘a brave clerk’ making a last-ditch Hail Mary attempt to cause a political firestorm and cause the court to reconsider. Liberals want to rip the blindfold off Lady Justice. They want to override impartiality with intimidation; they want to elevate mob rule over the rule of law.”

While Republicans have taken aim at the leak, top Democrats said the court’s draft decision should drive voters to vote against the GOP in November and are looking to hold a vote to codify abortion rights.

“I want to make three things clear. First, now that the court is poised to strike down Roe, it is my intention for the Senate to hold a vote on legislation to codify the right to an abortion in law. Second, a vote on this legislation is not an abstract exercise — this is as urgent and real as it gets. We will vote to protect a woman’s right to choose, and every American is going to see which side every senator stands,” Senate Majority Leader Chuck Schumer (D-NY) said on Tuesday.

Chief Justice John Roberts on Tuesday hit out at the “betrayal” of the leak designed to “undermine the integrity” of the court and added he had instructed the marshal of the court to launch an investigation into the leak.