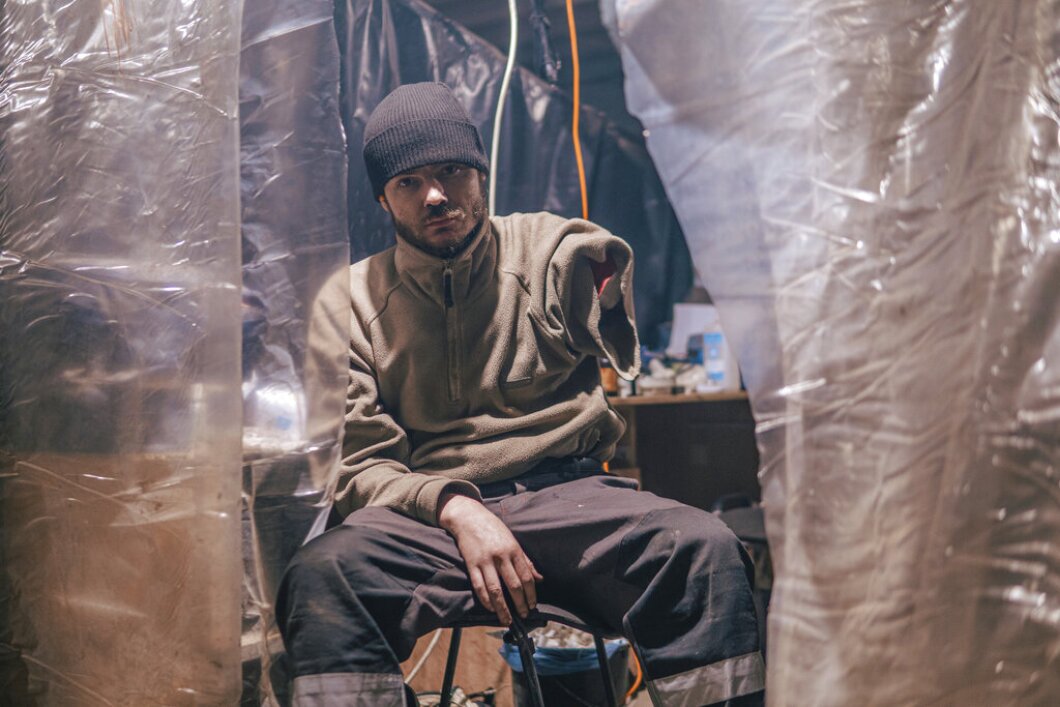 Family members of the Ukrainian soldiers trapped at the Azovstal steel plant staged a protest on Thursday in front of the presidential palace in Kyiv, pleading for their sons, husbands, and fathers to not be abandoned.

Family members of the Ukrainian soldiers trapped at the Azovstal steel plant staged a protest on Thursday in front of the presidential palace in Kyiv, pleading for their sons, husbands, and fathers to not be abandoned.

The group of mostly female protesters demanded that Ukrainian President Volodymyr Zelensky and the government do more to save the lives of as many as 2,000 servicemen surrounded by Russian forces at the steel plant in the southeastern city of Mariupol. The demonstration comes as Ukraine’s deputy prime minister clarified that negotiations with Russia on the evacuation of some of Mariupol’s last defenders would only see the release of 38 severely wounded soldiers, if negotiations are successful.

“Nobody attempts to save them. There is nothing we can do except for gathering at such demonstrations and making demands on our authorities,” said Tetiana Pogorlova, one of the protesters who spoke to Reuters.

The protesters held signs, some with images purportedly showing the horrific injuries suffered by some of the last Ukrainian fighters in the mostly Russian-controlled city, and chanted, “Save defenders of Mariupol, save Azovstal.”

When police in Kyiv broke up the protest, saying the demonstration in Maydan Square was “not authorized,” the demonstrators moved to the foreign ministry building where they begged for foreign intervention, according to news outlet France 24.

They are hoping that Turkey, in particular, can step forward and negotiate to provide the soldiers safe passage to the country, where they would stay for the duration of the war.

“For a long time we’ve been writing to the president, and then we thought that the president needs our support, so we decided to turn to global leaders so that they would help organize this extraction procedure,” Yaroslava Ivantsova, the wife of a trapped soldier, told France 24.

Ukraine’s Deputy Prime Minister Iryna Vereshchuk said on Thursday that authorities are working with Turkey, the Red Cross, and the United Nations on an evacuation plan for the trapped fighters, but that the focus right now is only on the seriously wounded. The Ukrainian proposal to the Russians would swap 38 Russian prisoners of war in exchange for the safe evacuation of the same number of Ukrainian fighters that are unable to walk.

“To be clear: we are currently only negotiating 38 heavily wounded (lying down) fighters. Working step by step. Exchange 38 heavy, then move on. There are no talks about exchanging 500 or 600 people now, according to some media outlets,” Vereshchuk said in a Facebook post.

“I urge everyone to work seriously, do not get into unrealistic reasoning and statements. Only realistic and sobriety of thoughts and actions will give results,” Vereshchuk’s post concluded.

The negotiations on the swap with Russia appear to be continuing despite comments from Russian-backed separatist leader Denys Pushylin on Thursday that indicated that an extraction attempt was not on the horizon.

He instead suggested that the trapped soldiers, who have so far refused to surrender, “lay down their arms and head to a tribunal,” and he said that Russian forces are continuing their assault on the facility in the meantime.

All women, children, and elderly civilians in Azovstal were successfully evacuated over the weekend, according to Ukrainian officials, and despite the many obstacles preventing the same outcome for the soldiers, family members at the protest were still holding out hope.

“They aren’t getting them out of there because they say it’s impossible. I don’t believe that it’s impossible. I know there is a way out of every situation, and I implore the president, I implore everyone concerned, to help and get them out,” Svetlana, a mother of a trapped soldier, told France 24.