We are in a war for the survival of free speech today. Any government official who refuses to recognize that truth is weak-minded, weak-willed, or already complicit.

It seems every day some notable Democrat is pushing for censorship.  After the horrific Buffalo mass murder on May 14, New York Governor Hochul threatened social media companies for not purging “hate speech,” that dangerously elusive term that has the potential to cover anything Democrats don’t like.  Former New York mayor Bill de Blasio demanded that Congress pass legislation to “reign in the spread of hate” on the Internet.  Senate Majority Leader Chuck Schumer had the audacity to send a formal letter to Fox News ordering the network to “immediately cease the reckless amplification” of ideas he blamed for the Buffalo shooting.  MSNBC’s Carl Cameron insisted that “it’s time to actually start doing things” to control speech, such as “maybe taking some names and putting people in jail.”  And all of these attacks on free speech are occurring while President Biden is flirting with the creation of a “Ministry of Truth” and the Democratic National Committee is “working with” Big Tech to “enforce a comprehensive political misinformation policy.”  How did we get to this perilous moment in the United States when prominent public figures so carelessly demand the regulation, punishment, and even criminalization of free speech?

Where is the journalistic outrage over threats to the First Amendment?  Remember when reporters pretended President Trump’s habit of slapping the “fake news” moniker on their work was nothing short of a threat against their lives?  Before Chris Cuomo found other ways to sink his career, CNN’s primetime spinmeister even claimed that being called “fake news” was a vile insult “equivalent of the N-word for journalists.”  America’s marquee news peddlers frequently excoriated President Trump for the insults he slung toward reporters and news outlets, even though he never once called for the censorship or punishment of a single journalist.  On the other hand, the Biden administration is planning the formation of its own “Disinformation Board” equipped to target any speech the government judges as not worthy of First Amendment protection, and the same reporters and outlets once up in arms for finding themselves on the receiving end of Trump’s barbs are now quiet as church mice.  Should that rather jarring hypocrisy be seen as evidence of obtuseness or duplicity?

Of course, it is easy to forget that it was President Obama, not President Trump, who originally bemoaned the rise of “fake news.”  Both before and after the 2016 election, he frequently mentioned the issue during news conferences and in interviews.  It bothered me at the time because his repeated insistence that speech (whether false or not) should be seen as a threat to the United States seemed very un-American to my ears.

Unlike President Trump’s later derogatory use of “fake news” as an insult to belittle CNN or Meet the Press, Obama’s discussion of “fake news” always carried the implication that what is “fake” must be excised, if not punished.  After President Trump’s election, Obama immediately pointed to “fake news” as the principal culprit for his success, and in the weeks leading up to the Electoral College vote confirming Trump’s victory, news media ran many stories alleging that “fake news” had thrown the election to the underdog.  As I listened to pundits exercise their First Amendment rights by calling for the punishment of other voices allegedly spreading “fake news,” it was clear that too many Americans were champing at the bit to strike a blow against freedom of speech.

Many stories alleged that “fake news” helpful to Trump had been planted and pushed by foreign sources, in particular Russia.  There were even some pundits claiming that the use of Russian “fake news” to influence an American election constituted an “act of war.”  I found this hysteria shocking.  Having watched President Obama seek to influence the Brexit vote in the U.K., as well as election votes in Canada, France, Israel, and elsewhere, I couldn’t believe that commentators in the U.S. seemed surprised, if not outraged, that other nations might try to influence American politics.  Even worse, though, I was dumbfounded that so many Americans would claim that certain political speech should be censored simply because that speech arose from non-Americans.  The United States, after all, is home to millions of foreigners, many of whom own real estate and operate businesses.  Yet the same Democrats who obsess over “multiculturalism” and “diversity” and actively encourage foreign nationals to cross our borders illegally were also making the spectacular claim that free speech somehow belonged to American citizens alone during election season.

The whole spectacle was horrifying not only because freedom of speech provides the bedrock for our other unalienable freedoms but also because defending that right has historically been deeply bipartisan.  The idea that Americans would call for physical war over speech they disdained was antithetical to America’s past unequivocal defense of free expression.  In the United States, I had always believed, most Americans embraced two salutary principles when dealing with speech they found abhorrent.  First, as with shopping in any street market, caveat emptor, or rather, be weary of buying into everything you hear.  Second, in all instances, the best remedy for incorrect, misleading, or repulsive speech is more speech directed against the offending speakers, never the strangulation of speech, itself.  If Russia or any other foreign nation were propagating what Democrats alleged was “fake news,” choosing to undermine the First Amendment in response was like responding to a foreign missile attack by tossing grenades at your neighbors.

However, because President Trump quickly appropriated “fake news” as a sparring instrument against his critics (a clear exercise of the president’s own free speech, even though the journalist class failed to recognize it as such), Obama’s initial efforts to claim that government must have a hand in deciding “what’s true and what’s not” were obscured by the larger-than-life personality who had just entered the White House.  I breathed a sigh of relief and hoped that Obama’s incipient campaign against free speech had been put out of its misery before it could become our misery, too.

Alas, it appears that President Obama and other like-minded opponents of free speech have had little trouble refocusing their efforts on rebranding their animus for “fake news” as some sort of national security imperative for fighting dreaded “misinformation.”  To their everlasting discredit, the same press corps that denounced President Trump as a threat to their vocation for his penchant to call out certain news media as purveyors of “fake news” now giddily follow Leftist politicians down the censorship rabbit hole in their burn-and-pillage efforts to root out any “mis-,” “mal-,” or “dis-” information threatening official State narratives.

First, the censors came for anybody who questioned the origin stories or officially-sanctioned medical treatments for COVID-19.  Then they came for anyone who spoke out against the numerous voting irregularities during the 2020 election.  Then they purged anybody reasonable enough to state factually that biological men cannot be women.  Finally, they squashed any voice that questioned why the U.S. or NATO should intervene against Russia in Putin’s invasion of Ukraine.  And in the background of these major censorship campaigns, social media platforms and search engines continue years’ of work in their organized efforts to marginalize the voices of conservatives and others who still insist on preserving their rights to dissent from official government narratives.  The anti-American reign of censorship Obama tried to kick off in 2016 is now back with a vengeance.

We are in a war for the survival of free speech today, and any government official who refuses to recognize that truth is either weak-minded, weak-willed, or already complicit.  Choose your allies accordingly. 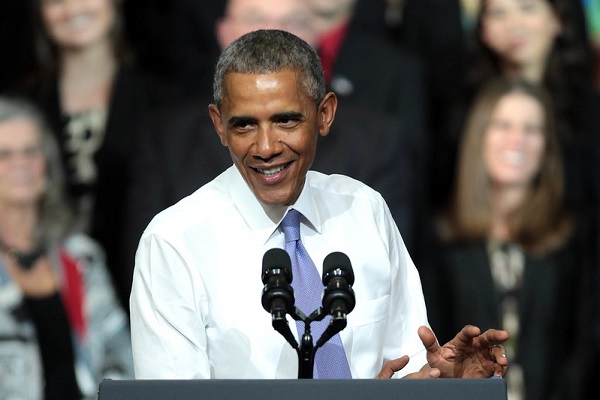