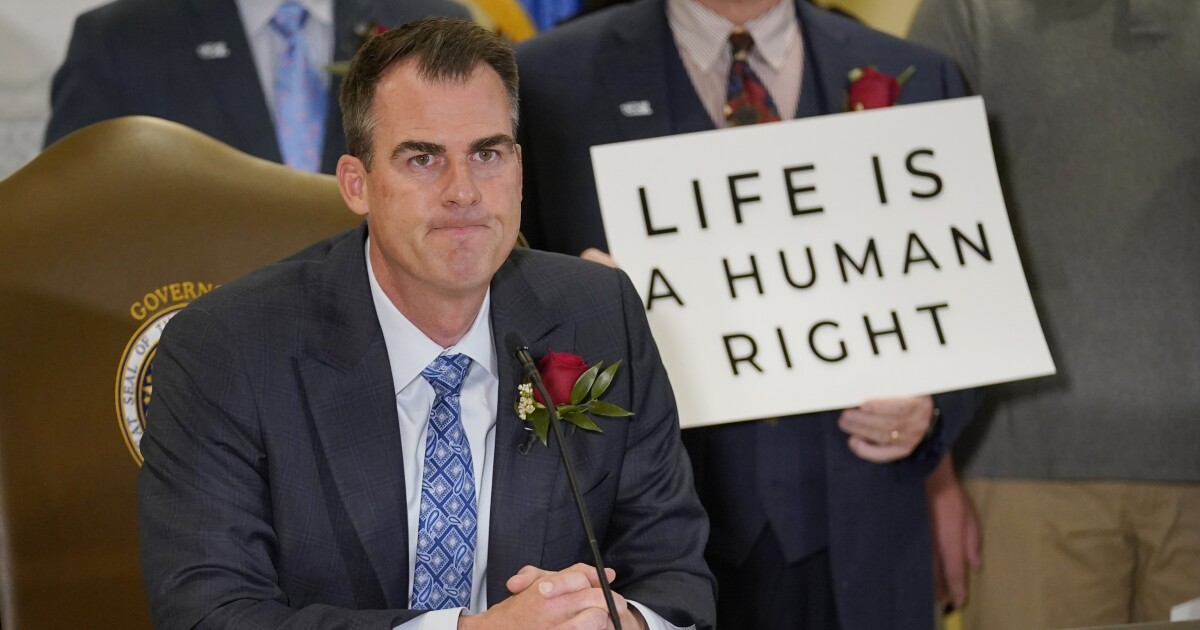 The bill, HB 4327, prohibits physicians from performing abortions at any point in a pregnancy unless it is to save the life of the mother or if the pregnancy is the result of incest, rape, or sexual assault that has been properly reported to law enforcement. Litigation aimed at stopping the law is already in the works.

“I promised Oklahomans that as governor I would sign every piece of pro-life legislation that came across my desk and I am proud to keep that promise today,” Stitt said in a statement. “From the moment life begins at conception is when we have a responsibility as human beings to do everything we can to protect that baby’s life and the life of the mother. That is what I believe and that is what the majority of Oklahomans believe. If other states want to pass different laws, that is their right, but in Oklahoma we will always stand up for life.”

The legislation, which passed the state’s GOP-led legislature last week, was modeled after a law approved in Texas last September that allows private citizens to sue anyone performing or aiding an abortion for up to $10,000. Women seeking an abortion are exempt in this case, however. The Texas law prohibits abortion after a heartbeat can be detected, which is usually around six weeks.

“There can be no higher cause for you and I to address in this body, madam speaker, than the protection of innocent unborn life,” state Rep. Jim Olsen, a Republican, said on the House floor Thursday, according to the New York Times.

Planned Parenthood and the Center for Reproductive Rights vowed to sue Oklahoma on behalf of abortion providers and advocates while Roe v. Wade, the 1973 landmark case in which the Supreme Court established the constitutional right to an abortion, still stands.

“Forced pregnancy is a grave violation of human rights and dignity,” reads an image tweeted by the Center for Reproductive Rights. “See you in court Oklahoma.”

#BREAKING: Oklahoma just became the only state in the U.S. to totally ban abortion while #RoevWade still stands. The Center & @PPFA are suing the state of Oklahoma on behalf of abortion providers and advocates to stop this cruel ban and restore abortion access in the state. pic.twitter.com/IOxefOqmfV

Oklahoma approved other bills related to abortion earlier this year, including SB 612, which makes it a felony for doctors to perform abortions. If convicted, doctors would face a penalty of up to 10 years in prison and up to $100,000 in fines. The law has been signed by Stitt but is not set to go into effect until August.

The topic of abortion has dominated statehouses across the country since the leak of a draft opinion from the Supreme Court indicating that the high court is poised to overturn the historic ruling in Roe and the subsequent ruling in Planned Parenthood v. Casey, returning the issue of abortion access to the states.