The focus of DEI programs is blame culture and scapegoating -- they harm, rather than help, our efforts to build a culture of equal respect and dignity.

And that figure omits the vast private-sector industry of diversity trainers and equity consultants, as well as the ubiquitous DEI officers that populate virtually all government agencies, plus a wide array of non-profits.

This aggressive expansion of the DEI industry across leading American institutions has  proceeded with little opposition until now. Like an invading army in hostile territory, the DEI industry has made the mistake of seeking to extend its reach across America’s K-12 educational sector, and taxpaying parents are standing up, saying: “Not with my children — the indoctrination stops here!”

The DEI industry’s answer is that such parents are just old-fashioned racists, White supremacists who seek to suppress discussion of America’s history of slavery, Jim Crow, and continued “systemic racism” today.

Leading writers in this field have crafted a flawed but seductive argument that delegitimizes and shuts down those who question their ideology, as exemplified by Robin D’Angelo’s book White Fragility. In D’Angelo’s world, any critique of the ideology is not an invitation to discuss — rather, it is proof of the “fragile” questioner’s inherent racism, and hence illegitimate.

Unfortunately, much, if not all of this — to borrow the philosopher Jeremy Bentham’s apt phrase — is just “nonsense on stilts.”

The claim that DEI (and its linked twins, Critical Race Theory and ethnic studies) merely involves teaching about slavery, Jim Crow, and the Civil Rights movement is a bald-faced lie. Our public schools have been teaching these important subjects for years. DEI is something entirely different.

Often this is taught through a DEI exercise called the “Privilege Walk.” Elementary and middle school kids are forced to stand in an open space while a teacher reads out a series of so-called unearned, unfair “Privileges” — like being white, male, wealthy, heterosexual, or “cis-gender.” The teacher orders the students having such privileges to take a step forward for each one; and those lacking same must take steps backward. The shame and blame message could not be clearer.

These lessons are doubly harmful. They discourage the so-called “oppressed” kids with the message that the system remains rigged against them — hence if the fix is in, then why even try? And it shames the “oppressor” kids as being the cause of the rigged system — inviting them to doubt and question their aspirations and achievements.

Notably, DEI ideology often includes in the “oppressors” category children from minority groups that have long experienced discrimination but presently reflect favorable academic and income measures — such as children of Jewish and Asian lineage, now deemed “White adjacent.” Hence DEI pedagogy often stigmatizes, rather than honors, such positive efforts at overcoming past discrimination.

Jewish students are further demonized by DEI programs’ frequent and false slanders of Israel as a “genocidal” “white supremacist” entity, which is now happening under California’s new K-12 ethnic studies curriculum. This charge is especially absurd, since the majority of Israelis are of native Middle East ancestry going back millennia, 850,000 of whom were expelled from Muslim-supremacist Arab countries after 1948.

The core problem with DEI curricula is that they train students to think of themselves and others primarily by their separate racial, ethnic, and gender/sexual characteristics. Hence. they teach the very opposite of Dr. Martin Luther King’s momentous call for racial equality. Whereas Dr. King called for E Pluribus Unum, DEI calls for E Pluribus Discord.

Oftentimes DEI programs also force schools to lower academic standards, to make kids feel more “equal.” Across America, DEI advocates have been in the forefront of efforts to eliminate “gifted and talented” programs, and to stop teaching Algebra I classes in middle schools. The DEI industry justifies these attacks on excellence as simply dismantling the attributes of “white supremacy culture” — which per the DEI ideology, include such evils as “objectivity,” “perfectionism,” and “worship of the written word.”

This is both counterproductive and profoundly demeaning to children of diverse backgrounds, by its false implication that such advanced learning is not for them. Instead of downgrading standards, the effort should be to uplift those kids having a harder time.

Ironically — and damningly — among those who suffer most from DEI’s erosion of standards are children of color. In one representative example, the Seattle, Washington public schools in 2018 refocused each grade’s traditional math curriculum to emphasize “math ethnic studies.” Students now had to “explain how math is ‘used to oppress and marginalize people and communities of color… [and] explain how math dictates economic oppression…’” Sure enough — as per journalist Luke Roziak — “[o]n the next state math exam, the performance of black students plummeted. At one pilot school, black achievement had been rising steadily every year, but all those gains and more were wiped out.”

In sum, DEI programs bring to our schools the very antithesis of what they purport to achieve, namely, racial division and lower standards. Our kids need the opposite: mutual respect and positive uplift.

The late British Chief Rabbi Jonathan Sacks used to say that there are two principal pathways by which cultures attempt to fix their problems. One way consists of what he calls “blame cultures” — these cultures ask, “Who did this to us” — then they go looking for scapegoats to blame and persecute, only making their problems worse. The other way consists of what he calls “penitential cultures” — which ask the question, “Now that we have this problem, what can we ourselves do to fix it?” This is how progress is achieved.

The focus of DEI programs is blame culture and scapegoating — they harm, rather than help, our efforts to build a culture of equal respect and dignity. And in so doing, DEI programs substitute intergroup discord for pluralistic amity. This is why K-12 parents across the country are standing up to school boards that insist on indoctrinating our kids in this simplistic and destructive ideology.

DEI advocates seem blind to the historical reality of humanity’s long and painful efforts to rise above our ancient, hard-wired tendencies towards tribal, “us-vs-them” division and violence. The flawed DEI teaching model would send us back down that violent rabbit hole. It should be opposed by all supporters of pluralistic liberal democracy, regardless of one’s race, creed, color, or political affiliation.

Henry Kopel, a former federal prosecutor, is the author of War on Hate: How to Stop Genocide, Fight Terrorism, and Defend Freedom, and is working with several parents to oppose DEI curricula in a Connecticut school district. 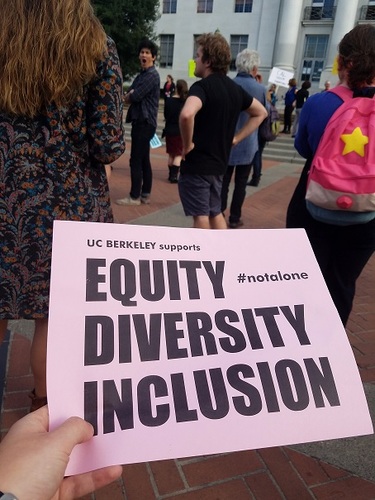