Patrisse Cullors admits she's made a “few mistakes" as the ugly headlines continue to mount over her scandalous spending as the disgraced former leader of Black Lives Matter.

Patrisse Cullors admits she’s made a “few mistakes” as the ugly headlines continue to mount over her scandalous spending as the disgraced former leader of Black Lives Matter.

She attempted to keep a lid on her self-authorized spending for several years, but the IRS simply couldn’t be ignored for another fiscal year. (The group hadn’t filed since 2017 and was forced to halt collection of donations.)

Once the bad news broke in a public tax filing last week, Cullors couldn’t be bothered to address the allegations of her being at the center of a multi-million dollar grifter project, but rather she doubled down on the absurd claim of being cast in the role of “victim.”

“Weaponizing against black women,” was the ex-leader’s way of explaining the IRS’s routine demand for a 990 form from the world-famous “social justice” network for purposes of fiscal accountability.

Apparently, her hand got caught in the “non-profit” cash register, but Cullors viewed her generous six-digit checks to friends and family for “various services” in a different light. “We didn’t figure out how to protect ourselves.” says Cullors in an interview at Vashon Center for the Arts in Washington. “And what’s true often, especially for black women is we don’t protect ourselves first.” Who knew?

The media was engaging in “straight-up attacks,” says Cullors in the Vashon townhall meeting. Cullors, who was forced to step down last year, was confident in knowing that her interviewer, radical abolitionist, Nikkita Oliver, wouldn’t ask embarrassing questions about what precipitated the attacks.

Most of the young people in the audience may never learn that Cullors started her campaign of self-enrichment back in 2016. As her movement’s diehard supporters were throwing Molotov cocktails at police, she went on a real-estate shopping spree, treating herself to four private residences, totaling a well-publicized $3.2 million total.

It isn’t just “white folks,” says Cullors, questioning the “beautiful work” she and her colleagues had accomplished as BLM’s inner circle. Now her accusations of “racism” ring hollow as black supporters want to know more about her largesse to private individuals — using other people’s money (OPM). 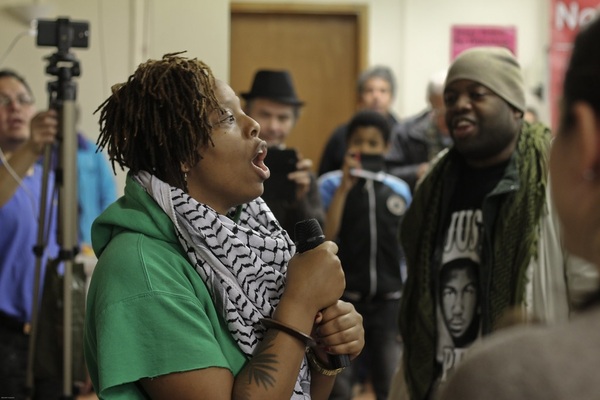 Among the red flags include: Paul Cullors, Patrisse’s brother, enjoyed a whopping $840,000 for “security”; Damon Turner, who fathered a child with Cullors, was paid $970,000 through his private company for “creative services” and producing live events; Cullors’s wife, Janaya Khan, topped the list with an $8 million mansion in Canada to run her “social-activist” non-profit.

In hindsight, Cullors admits it may have been a mistake to throw a birthday party for her son at a much disputed $6 million mini-mansion purchased by BLM in Studio City, CA. This, too, caused a firestorm of criticism as the property was hidden behind an LLC purchase before being disclosed as a BLM expenditure.

It is some comfort to Cullors’ supporters that she regarded the birthday party as a “mistake.” And she reimbursed the network $390.00 for the use of the home (an excellent discount), but more importantly the disgraced leader reimbursed the group another $73,523 for dipping into donor funds to charter a private plane.

Why bother with first class when you can have even more leg-room in a private plane?

Such damaging facts never surfaced in Oliver’s interview with Cullors. Instead, Oliver appeared to share Cullors’ distorted perception of personal responsibility and asked the absurd question: “What does it look like to set a standard for accountability and transparency that’s maybe not existed before?” Huh? Doesn’t the IRS demand fiscal accountability from every non-profit?

“And it’s probably unfairly placed upon us,” Oliver concluded. The use of the word “us” could not be missed in the exchange. Sisters in arms — coming up against the big-bad-regulatory world.

Diehard supporters of Cullors remain firm in defending the embattled social justice warrior, whose 63-page tax filing continues to cause a firestorm in the media. Patrisse’s two colleagues — who served as co-founders — can be counted on to adopt Culllors’ defiant attitude and continue to revile the “right-wing media machine” leveraging all of its weight against the organization and the movement.

“I think they’ve attempted to cancel us, but they have not been successful in canceling us,” says co-founder Melina Abdullah. She is joined in defense of Cullors by co-founder Alicia Garza: “They’ve (presumably white people) attempted to say — and I’m just gonna say it — ‘She bought some damn houses. We gonna cancel her.”

More than once, Cullors, and her comrades, have appeared tone deaf to the controversies swirling around them. It wasn’t a good look for Cullors, Abdullah, and Garza to appear sipping champagne — and clinking expensive crystal glasses — on the balcony of the much-disputed posh home in Studio City, located in a predominantly white neighborhood. (A much-criticized fact by donors.)

Viewing the photo, one could conclude that the party is over. The thing that still lingers is BLM supporters wondering how many of their donor dollars went into an extravagant lifestyle of poolside parties and meetings at five-star resort which was not the support they had envisioned for the beleaguered black community.