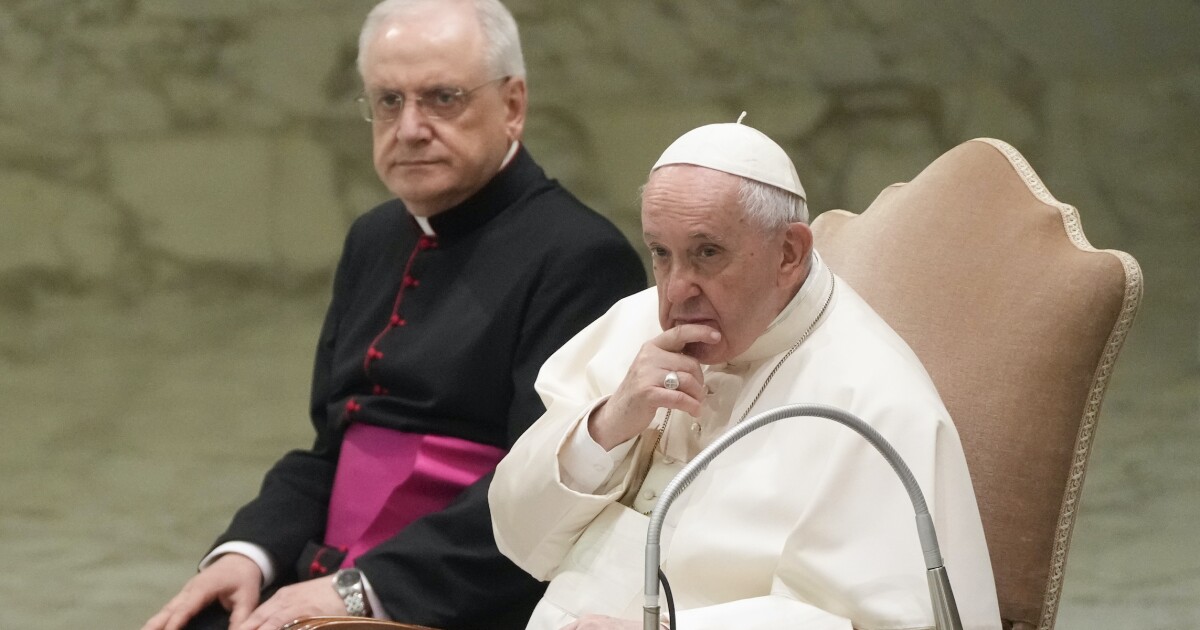 Russian Orthodox Patriarch Kirill’s willingness to “justify the Russian invasion” of Ukraine demeans his office on behalf of Russian President Vladimir Putin, according to Pope Francis.

Russian Orthodox Patriarch Kirill’s willingness to “justify the Russian invasion” of Ukraine demeans his office on behalf of Russian President Vladimir Putin, according to Pope Francis.

“I spoke with Kirill for 40 minutes on Zoom. For the first 20 minutes, he read from a piece of paper he was holding in his hand all the reasons that justify the Russian invasion,” the Roman pontiff told an Italian media outlet. “I listened to him and then replied: I don’t understand any of this. Brother, we are not state clerics, we shouldn’t speak the language of politics, but rather the language of Jesus. We are shepherds of the same holy flock of God. For this reason we must look for a path to peace, we must stop the fighting. A Patriarch can’t lower himself to become Putin’s altar boy.”

That rebuke contained the pope’s sharpest criticism of Moscow’s behavior in recent months. His remarks on the war reflected a more agnostic attitude and an apparent uncertainty about the extent of Russia’s battlefield progress as he faulted NATO for “barking at Russia’s gate” and underscored his anxiety that the conflict will expand.

“I have no way of telling whether his rage has been provoked,” the pope said. “I suspect it was maybe facilitated by the West’s attitude.”

Similarly, he expressed uncertainty about the propriety of providing military aid to Ukraine and likened the current crisis to the Spanish Civil War, as Nazi Germany and the Soviet Union provided substantial military support to the opposing parties.

“I can’t answer that question, I live too far away, I don’t know if it is the right thing to supply the Ukrainian fighters,” he said. “What seems indisputable is that in that country both sides are trying out new weapons. The Russians have just found out that tanks are useless and they might be developing new weapons. Wars are fought for this reason too: to test your arsenals. This is what happened in the Spanish Civil War, before the Second World War.”

Those tentative comments dismayed some Ukrainian observers, as they amplified Russian claims that NATO’s acceptance of membership applications by several Central and Eastern European countries, and Ukraine’s long-stalled desire to join the alliance, created an intolerable risk that NATO would someday attack Russia from Ukraine.

“It’s really regrettabl[e] that time and time again, he is refusing Ukrainians’ agency and doesn’t want to listen to what they say,” Center for European Policy Analysis nonresident fellow Olga Tokariuk, an independent journalist, wrote on Twitter in response to the interview. “To be fair, he didn’t explicitly accuse NATO of provoking Russia, but alleged that ‘NATO was barking at Russia’s gate’ and the West could be seen as responsible for Russia’s invasion of Ukraine. A striking misunderstanding of the reasons of this war.”

Putin claimed to fear such a contingency in the lead-up to the war, but the Kremlin chief underscored his fundamental belief that the Ukrainian state never should have been formed, as its establishment came at the expense of the late Russian empire. The pope, who hosted Hungarian Prime Minister Viktor Orban on April 21, suggested that the Hungarian leader — who had a lengthy meeting with Putin a few weeks before the war and has drawn sharp criticism within NATO, even from former friends in Central Europe, over his tepid support for Ukraine — had special insight into Putin’s intentions over the coming days.

“When I met Orban, he told me that the Russians have a precise plan, and that the war will end on May 9th,” Pope Francis said. “I sure hope so, that would explain the speed of the military operations in the last few days. Now, the Russians have taken not just the Donbass region, but Crimea, Odessa, the ports on the Black Sea, everything.”

That forecast aligns with initial assessments that Putin wanted Russia’s annual May 9 celebration of victory in the Second World War to function as a sort of triumphal march for Russia’s invasion of Ukraine, but Russian Foreign Minister Sergey Lavrov sought to temper that expectation in recent days, as Russian forces have not achieved their military objectives. Pope Francis overstated their success, given that Odessa and much of the Donbas region remain in Ukrainian hands.

“The Ukrainians can’t be blamed for having fought back in the Donbas. We are talking of 10 years ago. It’s an old argument. The Ukrainians are a proud people, that’s for sure,” he said before recalling a recent controversy over his plan to have a Ukrainian woman and a Russian woman read a prayer together during a Good Friday service. “They are very touchy, the Ukrainians, maybe because they were defeated and demeaned after the Second World War, and they paid a very heavy price. So many lives lost, they are a martyred people. But let’s not drop our guard, let’s keep an eye on what is happening or could happen in Transnistria next.”

That’s a reference to a breakaway region of Moldova, where Russia long has stationed a military contingent. Moldovan officials have accused Russia of trying to recruit Transnistrians into the war, and a Russian military commander reportedly said that Moscow seeks “full control” of southern Ukraine and a land bridge to Transnistria.

“The war is terrible, we must shout it with all our strength,” the pope said. “I have a bad feeling about it all, I’ll admit, I’m very pessimistic. However, it is our duty to do all we can to stop the war.”

Still, the Roman Catholic leader remains hesitant to travel to Ukraine, as he still hopes to arrange a visit to Russia.

“I am not ready to travel to Kyiv, not yet,” he said. “I feel that I shouldn’t go there. Not yet. First, I must go to Moscow, I want to meet Putin first of all. But in the end, I am just a priest, what can I possibly achieve? I’ll do what I can. But if Putin decided to leave the door open.”