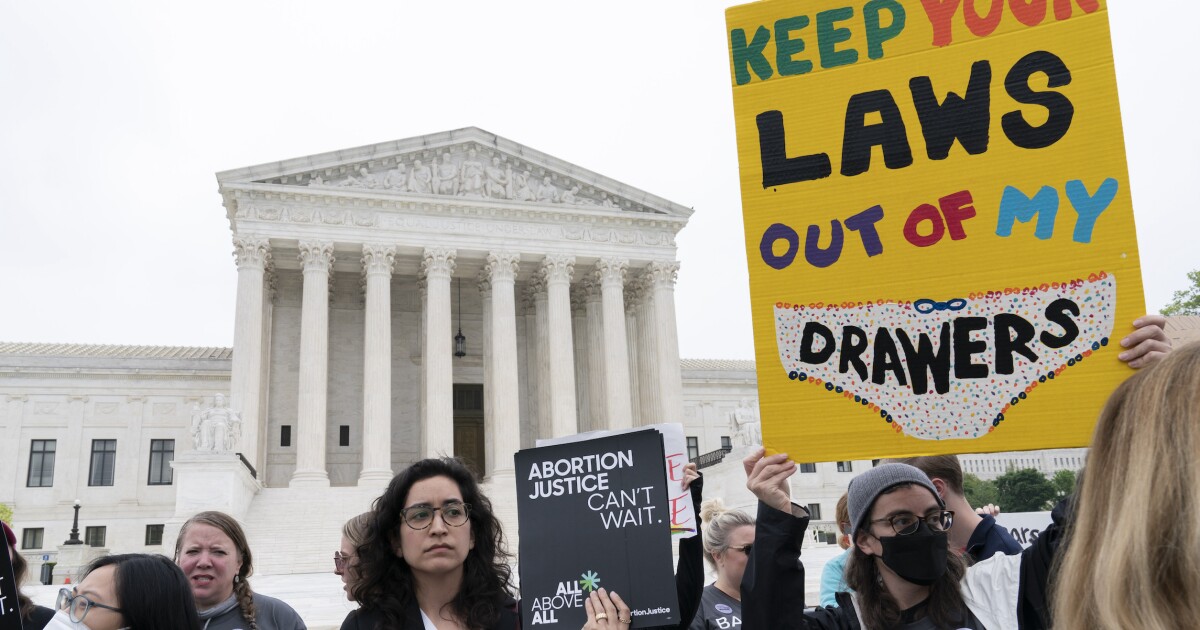 The expected demise of Roe v. Wade has led to legal warfare between states over a bitterly contested civil rights issue on a scale not seen since the events leading up to the passage of the Fugitive Slave Act.

The expected demise of Roe v. Wade has led to legal warfare between states over a bitterly contested civil rights issue on a scale not seen since the events leading up to the passage of the Fugitive Slave Act.

Red states are pursuing laws to curb abortions that entail regulating activity in other states. Deep-blue states like Connecticut, meanwhile, are passing measures to forestall such efforts and become abortion “sanctuaries.”

The efforts have drawn comparison from legal experts to the legal maneuvering among states in the 19th century that led to the enactment in 1850 of the Fugitive Slave Act, which was passed in response to free state laws meant to provide safe harbor to slaves who escaped from southern states. It required the recapture and return of enslaved people who made it to free states but also put people in free states at risk of being arrested for helping enslaved people, fomenting resentment that led to the Civil War.

Similarly, today’s new abortion laws could generate pressure for new federal laws providing for the interstate regulation of abortion. In clashing, they could also present the Supreme Court with new considerations related to abortion rights if it follows through with striking down the 1973 Roe v. Wade decision legalizing abortion nationwide, as outlined in a draft decision leaked Monday night.

“We’ve seen this a long time ago with issues around trying to stop enslaved people from being free in the states where they escaped to and states trying to enforce their laws across the borders,” said David Cohen, a professor at Drexel University’s Kline School of Law. “I think we’re going to see the same thing here with anti-abortion states trying to make sure that people in their state can’t go out of state to get abortions.”

A prime example of the kinds of abortion measures in question is a proposal from Missouri state Rep. Mary Elizabeth Coleman meant to prevent women from crossing the Mississippi River to obtain an abortion at a Planned Parenthood clinic in Illinois that was opened near the border in 2019 to provide abortions for women in Missouri, which has much stricter laws.

Coleman’s bill would permit private citizens to sue anyone who helps a Missouri resident obtain an abortion out of state, including anyone found to be transporting someone to have an abortion, helping to pay for the procedure, or instructing them on ways to terminate the pregnancy.

“I’m working on trying to deal with what happens in Missouri so Missouri residents who are harmed outside of the state have legal recourse for those who are trying to aid and abet people who are not following the laws of Missouri,” Coleman said.

Coleman told the Washington Examiner that she was not “trying to in any way regulate the laws of other states.”

Still, her proposed law, along with laws enacted in Texas and Idaho that similarly give private citizens the power to sue over the provision or abettal of abortions, has led blue states to pursue legal countermeasures.

Democrats in Connecticut, for instance, have advanced legislation to counter the civil enforcement mechanism employed by the six-week ban in Texas. The bill, which has the support of Democratic Gov. Ned Lamont, would bar state courts from accepting and enforcing subpoenas from anti-abortion states as part of their investigations into an abortion performed in Connecticut for one of their citizens. It would give abortion providers a legal shield if they flee to Connecticut after being found guilty in one of those states. Further, any out-of-stater who gets an abortion in Connecticut and is sued by someone in one of the states with bans in place would have the legal ability to countersue.

Abortion rights proponents fear that Republicans in red states will increasingly try to reach into other states to limit abortions.

“Abortion opponents do not merely wish to ban abortion within their own state limits; they want it to be illegal throughout the nation. And they will use any means possible to accomplish that goal, including by threatening those engaging in perfectly legal activity in other states with criminal and civil liability,” said Jessica Arons, senior policy counsel with the ACLU.

In crafting laws that extend abortion policies beyond their jurisdictions, the red states have brought the abortion battle onto new and uncertain constitutional ground.

Opponents could argue that such laws violate the constitutional guarantee of unencumbered interstate travel, as put forward in the 14th Amendment.

They could also run afoul of the Dormant Commerce Clause, a contested legal doctrine inferred from the Commerce Clause in Article I of the Constitution, one that prohibits states from imposing regulations on residents of other states.

“Missouri doesn’t say to its citizens, ‘We don’t allow gambling, but if you go gamble in another state, you can sue the person who dealt the cards,’” said Rachel Rebouche, the interim dean of Temple University’s Beasley School of Law. “The federal system generally relies on a certain amount of state cooperation and recognizing that when people travel, they avail of the services or laws in that other state.”

“I think it is something that we’re gonna see more of,” Rebouche added.

Under Roe and the 1992 decision Planned Parenthood v. Casey, states may not place an undue burden on women seeking abortions. Justices defined an “undue burden” as a “substantial obstacle in the path of a woman seeking an abortion before the fetus attains viability.”

But that federal limitation on state laws now appears in doubt.

The case now before the Supreme Court, Dobbs v. Jackson Women’s Health, centers on the constitutionality of a 2018 Mississippi ban on abortions after 15 weeks, around seven to nine weeks before the point of viability.

The leaked draft decision in the Dobbs case found that Roe and Casey were “egregiously wrong from the start” and “must be overruled.”

“If the court decides in Dobbs later this spring or the summer that states are constitutionally permitted to restrict abortion well before viability, then the argument that Missouri’s law is unconstitutional as an undue burden under abortion law, or case law, I think falls apart,” Rebouche said.