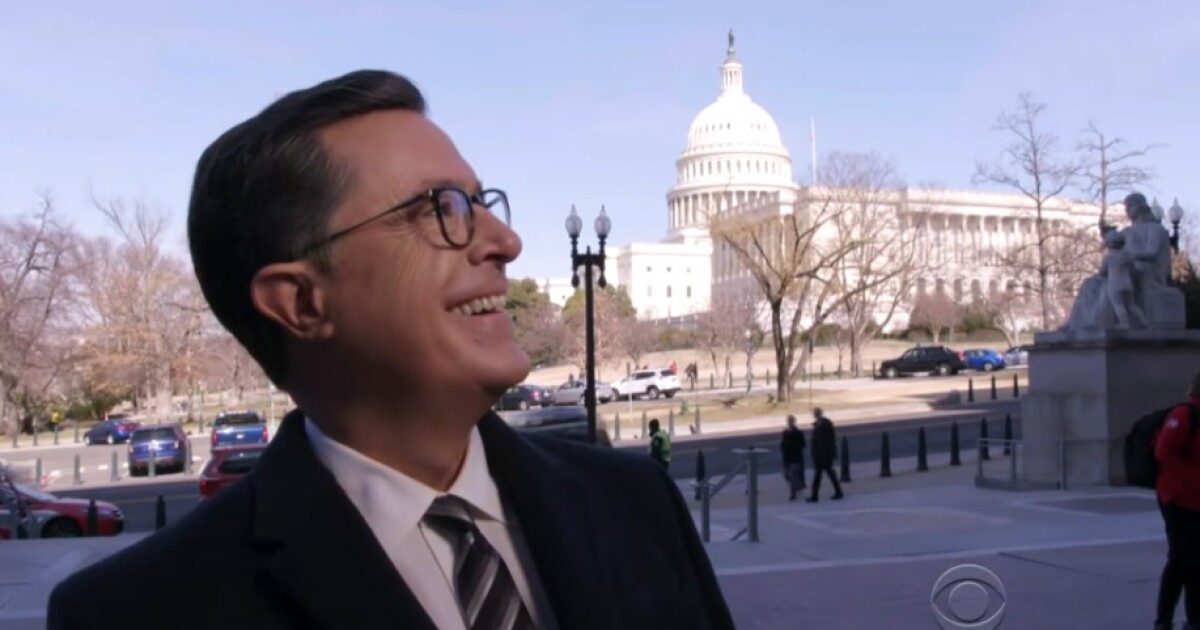 Reps. Jim Jordan (R-OH) and Rodney Davis (R-IL) sent a letter Monday to U.S. Capitol Police Chief J. Thomas Manger seeking information on the seven individuals they say “were not authorized” to be present in the Longworth House Office Building.

The Capitol Police acknowledged charges in a statement obtained by the Washington Examiner last week.

“The building was closed to visitors, and these individuals were determined to be a part of a group that had been directed by the USCP to leave the building earlier in the day,” the statement continues. “They were charged with Unlawful Entry. This is an active criminal investigation, and may result in additional criminal charges after consultation with the U.S. Attorney.”

The Late Show with Stephen Colbert is a talk show that airs on CBS. The network acknowledged that a production team involved in filming segments for cigar-smoking puppet Triumph the Insult Comic Dog was detained by Capitol Police.

“On Wednesday, June 15 and Thursday, June 16, Triumph the Insult Comic Dog was on-site at the Capitol with a production team to record interviews for a comedy segment on behalf of The Late Show,” CBS said in a statement. “Their interviews at the Capitol were authorized and pre-arranged through Congressional aides of the members interviewed.”

CBS continued, “After leaving the members’ offices on their last interview of the day, the production team stayed to film stand-ups and other final comedy elements in the halls when they were detained by Capitol Police.”

Jordan and Davis alluded to the Jan. 6 committee’s investigation into the Capitol riot in their letter.

“Much has been made lately about unauthorized access to House office buildings, including debunked Democrat allegations that Republican members led so-called reconnaissance tours of the Capitol Complex in advance of January 6. Unlike the Democrat allegations of reconnaissance tours, however, the events on June 16 actually resulted in arrests for unlawful entry,” they said.

The production team was there to conduct interviews with Reps. Adam Schiff (D-CA) and Stephanie Murphy (D-FL), who both serve on the Jan. 6 committee, which held a hearing Thursday, as well as with Rep. Jake Auchincloss (D-MA), who is not a member of the panel. A congressional source told the Washington Examiner that the Late Show crew members were asked to leave earlier Thursday when they were outside the Jan. 6 committee hearing room without proper media credentials. Despite the earlier warning, the crew came back later to film segments for the show and were creating a disturbance by banging on congressional doors at night, the source said, adding, “They knew what they were doing was wrong.”

The team was let back into the House office buildings by an Auchincloss aide sometime after 4:30 p.m, according to Fox News, which said it was told the Auchincloss staffer was informed the crew had more interviews to conduct.

“The congressman had a scheduled interview with CBS, as did other members of Congress,” Matt Corridoni, Auchincloss’s spokesman, told the Washington Examiner on Monday. “Our contact with them ended well before the building closed for the evening. We do not condone any inappropriate activity and cannot speak to anything that occurred after hours.”

This wasn’t Triumph’s first visit to the Capitol. In February 2020, amid the second impeachment effort against former President Donald Trump, Colbert introduced a segment by describing Triumph as “one of the most distinguished and accomplished journalists I have ever worked with.”

The segment featured Triumph going through Capitol security and repeatedly attempting to gain access to the chamber where the impeachment proceedings were taking place. One security guard repeatedly told Triumph, “You can’t come here.”

Triumph called himself an “investigative reporter” and pretended to give up on gaining access, saying, “I guess I can’t be here. Maybe someone else can come.” The security guard then stopped Triumph from getting in as the puppet returned in successive disguises, including dressed up as a corporate lobbyist, a masseuse, and a pizza deliveryman.

After showing Triumph speaking with Rep. Brad Sherman (D-CA), the segment depicted the congressman apparently attempting to help Triumph gain access again, with the puppet this time dressed up as John Bolton, who was a national security adviser to Trump. A different security guard, whose face was obscured, told the puppet, “Sorry, no one allowed.”

The puppet ended his report outside the Capitol by declaring, “This is Triumph reporting from the greatest deliberative body in the world — for me to poop on!”