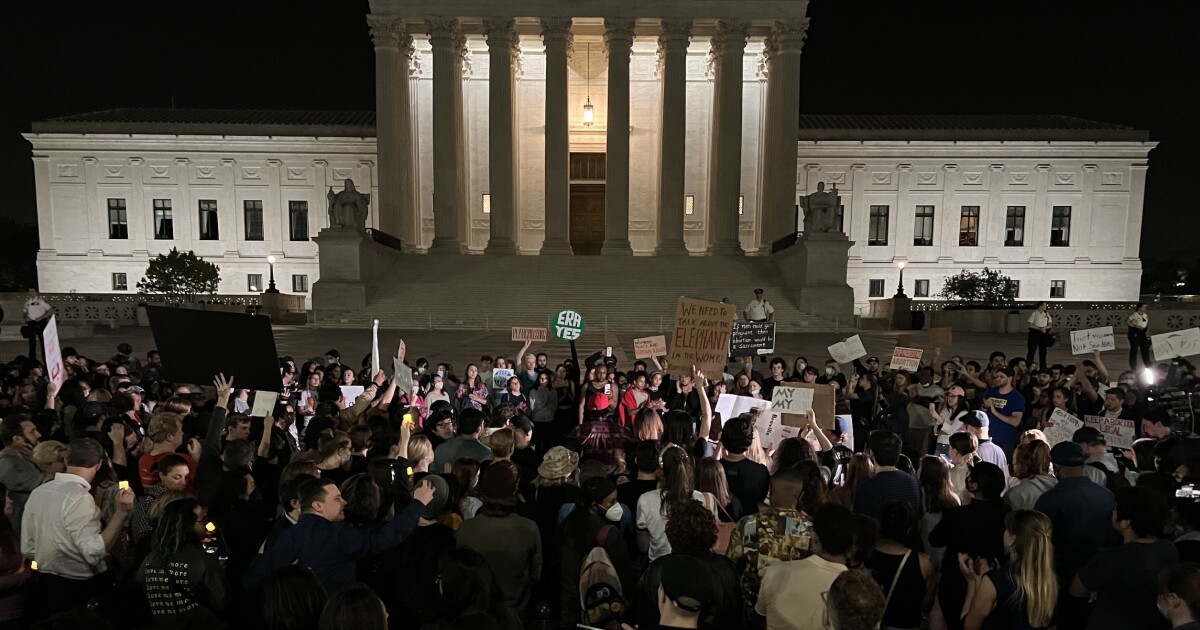 Corporations face renewed pressure from liberal activists to push back against anti-abortion policies and politicians following the leak of a draft Supreme Court decision striking down Roe v. Wade.

Corporations face renewed pressure from liberal activists to push back against anti-abortion policies and politicians following the leak of a draft Supreme Court decision striking down Roe v. Wade.

A leaked draft opinion written by Justice Samuel Alito and published by Politico indicated that the 1973 Roe v. Wade ruling legalizing abortion nationwide is likely to be overturned by the high court’s conservative majority.

MSNBC columnist Liz Plank called for companies to weigh in on the news of the leak in a tweet that garnered thousands of likes and retweets.

“Every single corporation that posted a flowery International Women’s Day quote should be releasing a statement supporting reproductive freedom,” she said, adding that her followers should tag companies in the comments in order to add public pressure to the request.

Every single corporation that posted a flowery international women’s day quote should be releasing a statement supporting reproductive freedom.

“OkCupid has proudly supported reproductive rights for years, and we’re not stopping now. Gender equality is at stake and more brands need to step up,” the company said on Twitter, adding that people should tag other companies and encourage them to sign the “Don’t Ban Equality” statement.

The Don’t Ban Equality statement was created in response to red states passing laws to restrict access to abortions and has already been signed by a number of companies, including Patagonia, Lyft, Yelp, and others.

Should the 1973 ruling be overturned, Republican-led states would have more leeway in crafting laws that curb abortions, something that liberal activists hope can be prevented through the exertion of corporate force.

Under threat of boycott, activists will likely call on companies to curtail business or investments in states that pass restrictive abortion laws in the fallout of the possible Supreme Court ruling.

Charles Elson, a professor of corporate governance at the University of Delaware, told the Washington Examiner that he thinks the public pressure will force companies to take stances on the abortion debate, although he said the pressure is unlikely to result in companies divesting from individual states.

And while corporations have been increasingly trying to wield their financial power to influence politics, the situation with Disney has shown that there can be a backlash to corporations siding with liberal activists.

Initially, Disney did not take a position on the Parental Rights in Education bill, branded the “Don’t Say Gay” bill by critics, which prohibits the classroom instruction of sexual orientation and gender identity through third grade.

But after facing pressure from activists, investors, and employees, the company came out in strong opposition to the bill. Disney CEO Bob Chapek also announced his company would end political donations in the Sunshine State.

In response, the Republican-led Senate passed the legislation that would dismantle the Reedy Creek Improvement District, which allows Disney to oversee its own zoning, infrastructure, laws, and policing in the area around its parks. The state House also voted to do so by a 70-38 vote.

Disney’s stock has additionally lost billions of dollars in value since Chapek and the company began publicly railing against the new education legislation. The blowback that Disney has received for its foray into politics could put a damper on the ambitions of those who want to see corporations push back on abortion laws.

“You’re going to offend somebody, and companies can’t operate that way. Companies are economic ventures. No one goes into a company based on their politics — it’s a common goal of producing a good product at a fair price,” Elson said. “Corporations weren’t set up to resolve these [issues] effectively. … They don’t have the same mechanisms we have in the political process.”

Elson also pointed out that pressure for companies to get more political isn’t coming from a wide swath of the population but a very vocal minority. He said that at the end of the day, most people just want to purchase well-made products at fair prices.

While Monday night’s leak revealed that the Supreme Court might overturn Roe v. Wade, the draft that was released is far from complete.

The court’s holding will not be final until it is published, which is expected in the coming months.