Abortion is portrayed as pro-women, but the evidence shows that it carries serious risks.

“Thou shalt not steal my repro rights,”

“Keep your politics out of my uterus.”

Crowds of angry women chanted slogans like these outside the Supreme Court after the leak of the draft majority opinion in the Dobbs case suggesting that the Court might overturn Roe v. Wade. Pro-choice advocates believe that abortion empowers women. That abortion frees women from the shackles of pregnancy, motherhood, and child rearing. That being in favor of abortion is pro-woman.

But is it really?

In my college years, I had to decide whether abortion would be a good solution for me as a woman. I was only a sophomore when I learned that I was pregnant. I did not know how my very religious family was going to react. I didn’t know if my boyfriend at the time was going to stay with me. I didn’t know if my Christian university was going to penalize me. Some friends nudged the option of abortion — they thought the career I was pursuing was far better for me than becoming a mother. My doctor implied that the determining factor should be my happiness. Abortion was presented as the solution to the problem of an unexpected pregnancy.

But is abortion really good for women? Medical research tells a different story. A meta study conducted by the National Institute for Health reviewing hundreds of studies on the psychological implications of abortion on women found that (1) There are no mental health benefits associated with abortion; and (2) Women who have abortions have significantly higher rates of anxiety, depression, substance use, traumatic symptoms, sleep disorders, and other negative outcomes.

Another study conducted by the American Psychological Association concludes, “[It] is clear that some women do experience sadness, grief, and feelings of loss following termination of a pregnancy, and some experience clinically significant disorders, including depression and anxiety.”

Finally, a study funded by the National Institute for Mental Health looked at women’s psychological state immediately after their abortion and then again two years later. The researchers found that two years later, women who had an abortion have “significantly rising rates of depression and negative reactions and lowering rates of positive reactions, relief, and decision satisfaction.” They also exhibit symptoms of abortion-specific post-traumatic stress disorder (PTSD). 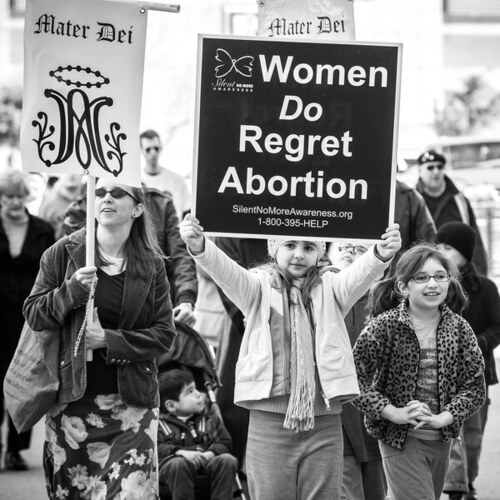 Besides the emotional trauma caused by abortion, it can also cause irreversible physical damage. About 20% of all women who have an abortion suffer complications following the procedure. While some of these complications are minor (nausea, vomiting, bleeding, etc.), others are far more serious: infection, uterine perforation, cervical injury, shock, and excessive bleeding. According to a study done by the National Institute of Health, the risks of toxic shock, hemorrhaging, and death exist regardless of whether the abortion is surgical or by pill [mifepristone]. Post-abortive women are also at a higher risk of having complications in future pregnancies such as an ectopic pregnancy, placenta previa, stillbirth, premature delivery, low birth weight, and miscarriage than women who have not had an abortion.

A study by the American Association for Cancer Research found that women who have abortions are 40 percent more likely to develop breast cancer. When women become pregnant, their hormones signal to their breasts to prepare for breastfeeding. Cells rapidly multiply to develop milk producing tissue. When this process is interrupted by an induced abortion cells that were in the process of becoming milk-producing are left with a significantly higher risk of becoming cancerous. Dr. Joel Brind, who has been studying the abortion-breast cancer link for years states: “It has been unequivocal for over 40 years that a pregnant woman who chooses abortion will end up with a higher long-term risk of breast cancer than if she chooses instead to let nature take its course.”

Abortion is portrayed as pro-women, but the evidence shows that it carries serious risks. The baby in the womb is clearly not the only victim of abortion. In an open letter to state lawmakers, leaders of various state and national pro-life organizations wrote:

The mother who aborts her child is also Roe’s victim. She is the victim of a callous industry created to take lives; an industry that claims to provide for ‘women’s health,’ but denies the reality that far too many American women suffer devastating physical and psychological damage following abortion.

I am forever thankful that when I was a confused and scared college sophomore, I did not get an abortion. I now have my beautiful almost three-year-old daughter whose life has given me a whole new purpose. I married her father and we have increasingly grown into the responsibility of raising our share of the next generation of citizens who love in truth.

Roe was and is not pro-women. It has urged women to risk their health and their lives in the name of “empowerment.” What will really empower women are laws against abortion. It will save countless unborn children and ultimately, it will help women. Women deserve better than abortion.