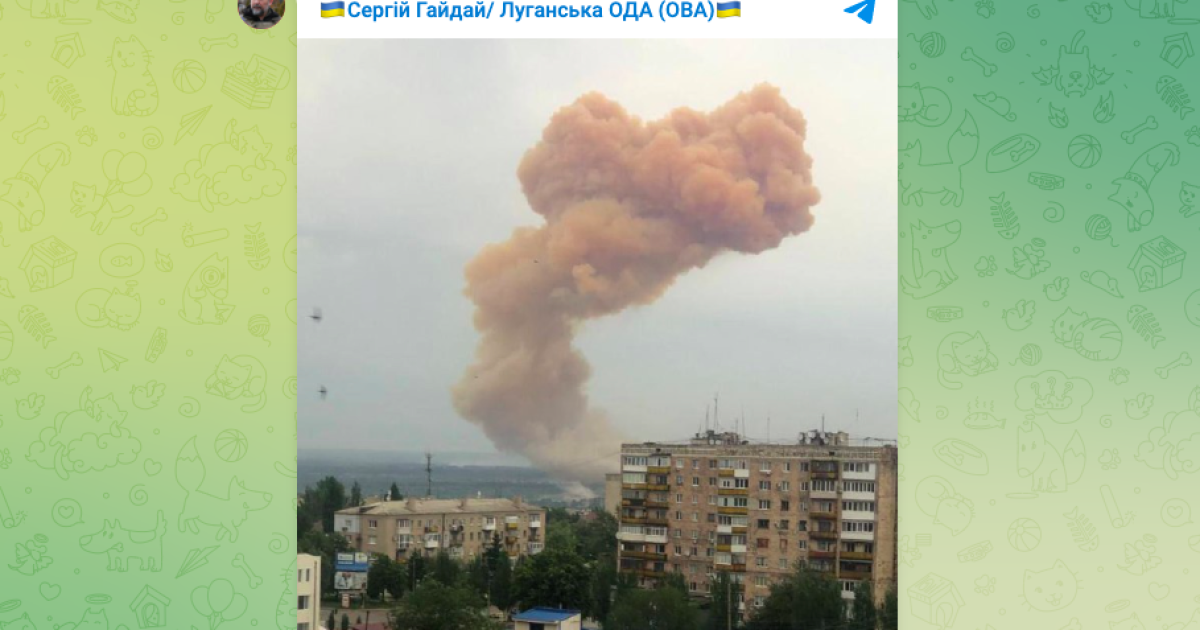 A Russian airstrike targeted a chemical plant in eastern Ukraine on Tuesday, causing a dangerous cloud of toxic gas to rise into the air.

A Russian airstrike targeted a chemical plant in eastern Ukraine on Tuesday, causing a dangerous cloud of toxic gas to rise into the air.

The airstrike hit a tank of nitric acid at a chemical plant in Severodonetsk, according to a Ukrainian official. Images of the aftermath of the blast show toxic orange smoke billowing up near several buildings as well as Ukrainian troops. The head of the Luhansk region warned civilians in Severodonetsk to stay in shelters, as inhaling the toxic fumes could be dangerous.

“Air strike in Severodonetsk. The racists hit a tank with nitric acid at a chemical plant,” Serhiy Haidai, the head of Luhansk’s regional military administration, said on Telegram Tuesday, referring to the Russian strike.

“Urgently!! Residents of the region! Do not come out of hiding!” Haidai added, explaining the dangerous effects of nitric acid fumes on humans.

No injuries or deaths have been reported as a result of the airstrike or the gas cloud.

Video reportedly of the aftermath of the airstrike shared on social media purported to show Ukrainian troops near the blast site. The smoke and gas from the explosion is still rising into the air as two soldiers appear hunkered down in trenches in a wooded area.

Other images of the smoke and gas cloud show that the blast occurred near several buildings that appear to be residential.

⚡️The invaders fired at a chemical plant in #Severodonetsk. As a result of the shelling, a tank with nitric acid exploded.

The head of the #Luhansk regional administration, Serhiy Haidai, urges citizens not to leave their shelters and close all windows. pic.twitter.com/FSCiagk0tz

Russian-backed forces in Luhansk claim that Ukrainian troops are hiding in bomb shelters and in the industrial zone of Severodonetsk, according to a report.

Haidai said on Tuesday that Severodonetsk is mostly under the control of Russian forces.

The Institute for the Study of War, a Washington, D.C.,-based think tank, said on Tuesday that it appeared that Ukrainian forces were withdrawing from the city.

Severodonetsk is the last major city in the Luhansk province of the Donbas region under Ukrainian control.