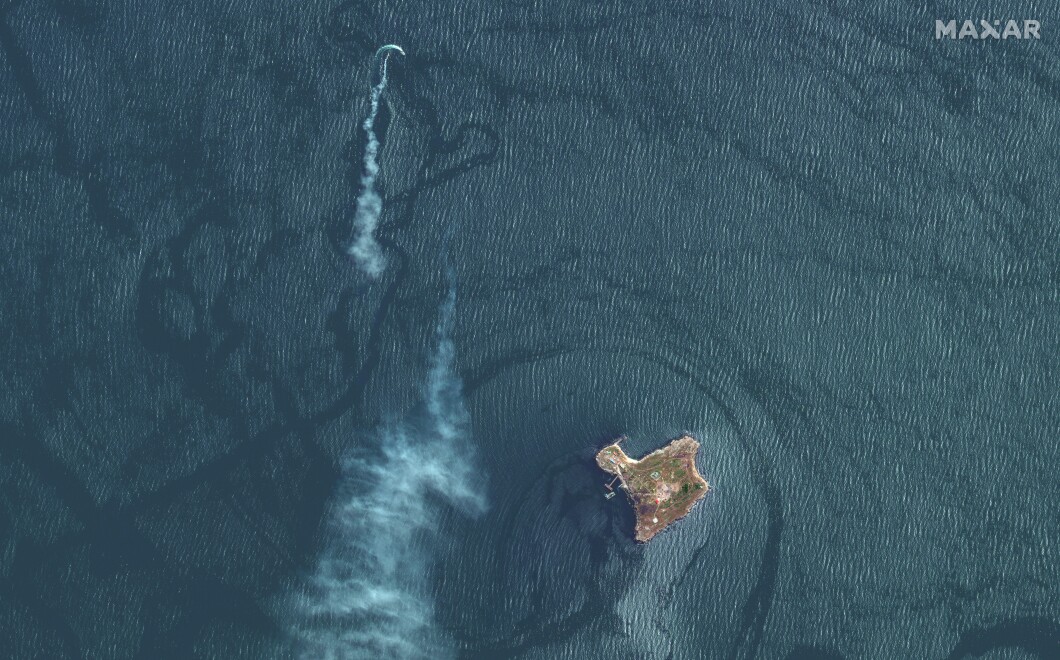 The images also show the aftermath of a recent Ukrainian assault against Russian forces controlling the island, including a sunken ship and several damaged buildings and air defense vehicles, the U.S.-based satellite company said.

The smoke contrails of recently fired missiles or munitions can be seen over the waters near the Black Sea island, which is about the 30 miles off the coast of Romania.

Maxar Technologies believes the scene in one of the images shows a Russian Serna-class landing ship “making evasive maneuvers” to avoid being hit during a “probable missile attack.”

‘NOBODY ATTEMPTS TO SAVE THEM’: RELATIVES OF TRAPPED UKRAINIAN SOLDIERS PROTEST ZELENSKY

On the island’s north coast, a barge with a heavy-lift crane can be seen near a sunken Serna-class ship, reportedly struck by Ukrainian drones. What appears to be another landing ship along the coast can also be seen near the sunken vessel.

Odesa region military administration spokesman Serhiy Bratchuk said on Sunday that a landing ship and two Raptor-class patrol boats had been hit by Ukrainian forces. It is unclear if the ship in the Maxar imagery is the vessel Bratchuk is referring to.

On Snake Island’s mainland, the satellite photos show damaged buildings from recent airstrikes and what Maxar has identified as several Russian Pantsir surface-to-air missile systems near the bombed-out structures.

Snake Island, also known as Zmiinyi Island or Serpent Island, was captured by Russian forces on the first day of Russia’s invasion.

During the initial battle for the island, Ukrainian border guard Roman Hrybov told the crew of the Russian warship Moskva to “go f*** yourself” when asked to surrender. The Moskva cruiser ship later sunk in the Black Sea after a Ukrainian missile strike.