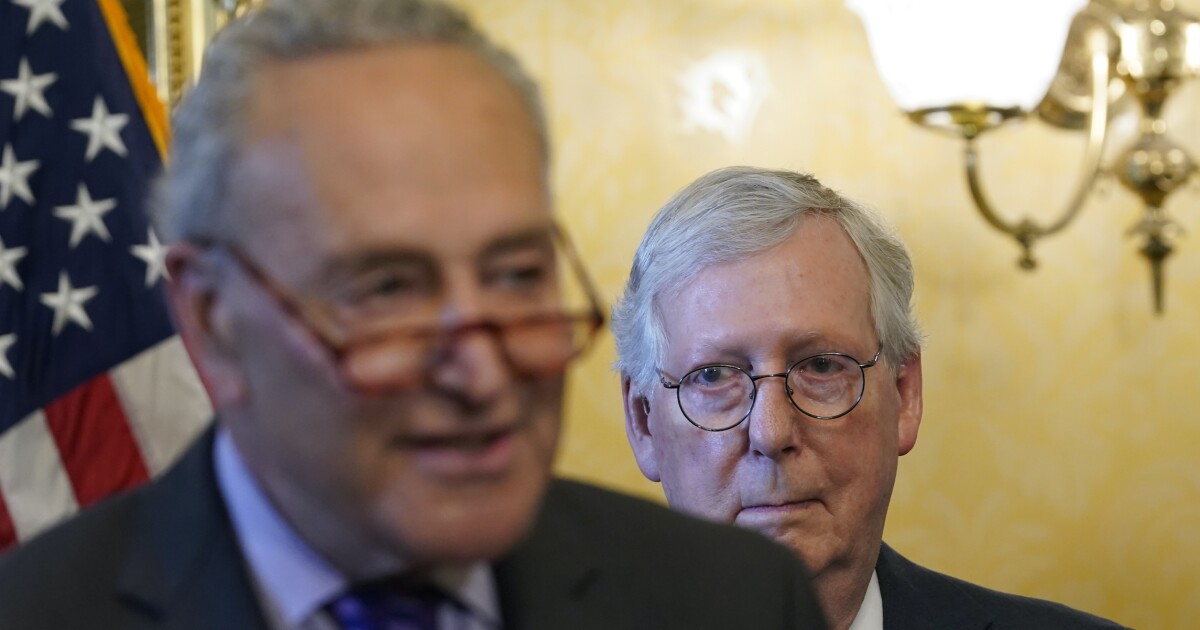 Senate leadership on Wednesday touted a compromise between Republican and Democratic negotiators on legislation to combat gun violence, painting the bill as a commonsense step amid criticism from their far-left or far-right flanks.

Senate leadership on Wednesday touted a compromise between Republican and Democratic negotiators on legislation to combat gun violence, painting the bill as a commonsense step amid criticism from their far-left or far-right flanks.

A bipartisan group of Senate negotiators including Sens. Chris Murphy (D-CT) and John Cornyn (R-TX) released the text of their bill Tuesday, which would grant funding for states to implement red flag laws or other crisis prevention measures, enhance some background checks, and close the so-called boyfriend loophole: a gap in federal law barring spouses, but not dating partners, convicted of domestic abuse from gun ownership. The bill would also provide funding for some mental health resources and school safety measures. The negotiations followed a string of recent mass shootings, including one at a Uvalde, Texas, elementary school.

In remarks Wednesday on the Senate floor, Senate Majority Leader Chuck Schumer said he intends for the upper chamber to pass the bill by the end of the week.

“I am pleased Congress is on the path to take meaningful action to address gun violence for the first time in nearly 30 years,” Schumer said. “The bill is real progress. It will save lives.”

Schumer noted 64 senators voted Tuesday to begin debate on the bill in a procedural step, signaling that the bill has enough support to clear the Senate’s 60-vote filibuster threshold.

“Let me emphasize that 64 members came together last night to move forward — unmistakable signs of the growing support and momentum behind this bill,” Schumer said. “That’s good news for American families and American communities that waited for years to see real progress against violence.”

Schumer and Senate Democrats have faced criticism from some liberal activists who sought a more robust response in the wake of the Uvalde shooting, such as the wide-ranging bill passed recently by the House that included raising the minimum age to purchase certain semi-automatic rifles from 18 to 21.

But Senate Republicans have also faced criticism from some of their base for their compromise, with some, including the National Rifle Association, opposed to their deal with Democrats. Cornyn was recently booed by some attendees of the Texas GOP convention for his work on the bill.

Senate Minority Leader Mitch McConnell (R-KY) argued that the Senate has not passed gun legislation after similar shootings because Republicans felt Democrats were insistent upon proposals they saw as inconsistent with the Second Amendment, but Democrats displayed more willingness to compromise in this negotiation.

“Throughout recent years, our Democratic colleagues have indicated that we’re not interested in substantial legislation to create safer communities if they didn’t get to take massive bites out of the Second Amendment,” McConnell said on the Senate floor. “There have been attempts and bipartisan talks after horrible incidents in the past, but they fell apart when Democrats would not sign on to anything, anything that did not roll back the Bill of Rights for law-abiding Americans.”

McConnell, who offered his support to the legislation after the text was released Tuesday, said the bill would provide states with the resources to implement crisis prevention measures, mental health resources, and additional steps toward school safety “of their own choosing.”

A cloture vote on the bill will take place Thursday, followed by up to 30 hours of debate, leaving the bill on track to pass late Friday, unless there is an agreement to shrink that window of time. The House could take up the bill as soon as this weekend.