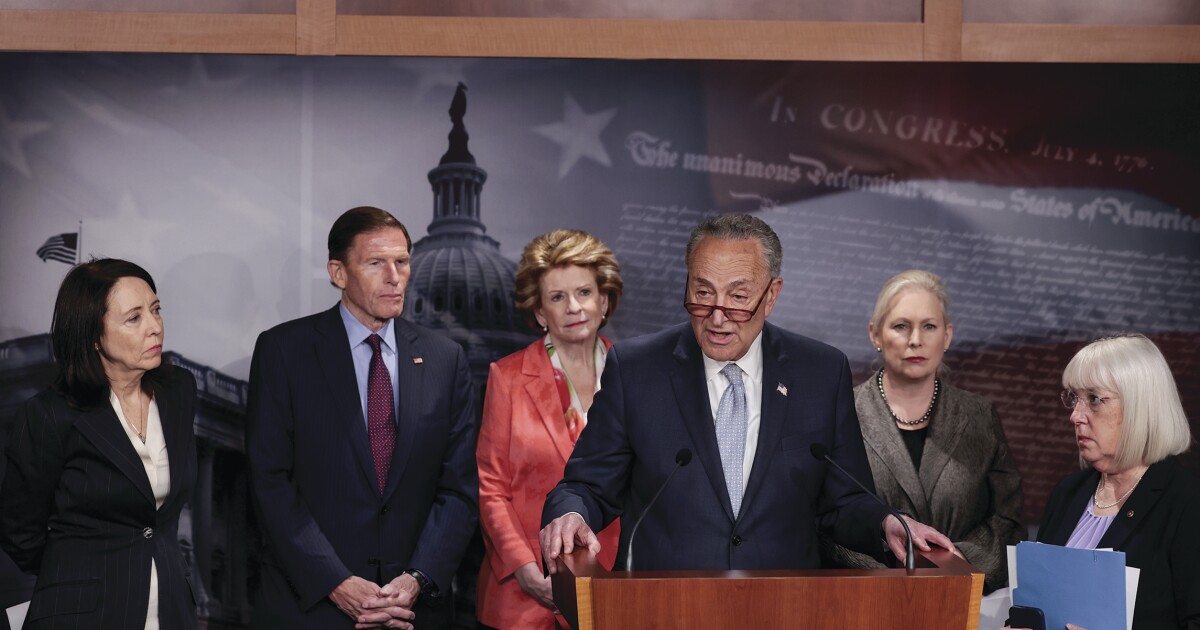 Some Senate Democrats have threatened that if Roe goes, so does the filibuster.

Some Senate Democrats have threatened that if Roe goes, so does the filibuster.

After Politico reported the leaked draft of a Supreme Court decision that would entirely overturn Roe v. Wade and Planned Parenthood v. Casey, returning the issue of abortion to the states, Senate Democrats made a show of working to enshrine abortion at the federal level.

The talk is primarily just that, as Democrats would need a minimum of 60 votes to overcome the filibuster and bring any such legislation to a vote. The Senate’s 50-50 partisan makeup precludes virtually any possibility of passing abortion restrictions, but that won’t stop Majority Leader Chuck Schumer (D-NY) from trying.

The Senate is planning to take up a bill that would codify the Roe precedent, a senior Democratic source told the Washington Examiner. But going anywhere with it would require abolishing the filibuster, a controversial rule that allows senators to speak on the floor uninterrupted for as long as they wish, delaying legislative action. The filibuster can only be overcome with the support of three-fifths of the body, or 60 votes.

That means Schumer would need the full support of his party plus 10 Republicans, and precedent doesn’t bode well for any changes to either the filibuster or federal abortion statutes in this Congress.

In January, a vote to change the filibuster failed due to the opposition of centrist Sens. Joe Manchin (D-WV) and Kyrsten Sinema (D-AZ). In February, the Women’s Health Protection Act, a bill that would have secured abortion access under federal law and repealed many state restrictions, failed to pass the procedural vote stage to begin debate. Manchin broke with his party to vote against it, and pro-abortion Sens. Lisa Murkowski (R-AK) and Susan Collins (R-ME) wouldn’t get on board.

But abortion is too big a fish for Democrats to let go quietly. Even without hope of securing access under federal law, it’s an issue too intrinsic to the liberal base not to fight about leading into the 2022 elections.

“Such a decision, if it comes to pass, would be an utter abomination,” Schumer said on the Senate floor last week. “Women across America would suffer irreparable harm to their rights, their health, and their dignity. It is vital that we act quickly because this is no longer an abstract exercise.”

On the other side, Republicans have shown little interest in codifying abortion restrictions, saying the issue is best left up to the states to decide individually.

“I think it’s unlikely you’re gonna find everybody agreeing on a national measure. I think you’d see the elected representatives in each state make those decisions,” Sen. Mitt Romney (R-UT) said, with many other GOP senators concurring.

Sen. Kevin Cramer (R-ND) told reporters that he could see the anti-abortion movement making a case for federal restrictions.

“I don’t find a lot of solace in that just because [an abortion] didn’t happen in my state,” Cramer said. “So yeah, I think you could expect that pro-life activists would push for federal protections.”

Democrats are hoping that abortion could be the issue that reignites their base ahead of the midterm elections, shadowing President Joe Biden’s low approval ratings and economic woes. But lawmakers aren’t convinced this will be the case, saying that the kitchen table issues of high gas prices and inflation weigh heavier on voters daily.

“From the minute you get in your car and begin on your way to work or school or wherever you’re going, you are reminded continuously with gas prices and everything you do manifests the huge problem with inflation,” said retiring Sen. Pat Toomey (R-PA). “[Abortion is] not a political challenge for us.”

Manchin said that “inflation is the No. 1 driving factor” in his state, where it’s “hurting everyone,” signaling he’s not eager to press an issue that’s secondary to West Virginians.

How the court’s decision affects the midterm elections will have to wait until the final decision is revealed. Though Chief Justice John Roberts confirmed the authenticity of the leaked opinion, authored by Justice Samuel Alito, it was only a first draft dated in February. Most Republican lawmakers have held off on prematurely celebrating the decision as a victory until the court officially releases a ruling.

Instead, Senate Minority Leader Mitch McConnell (R-KY) has focused on the ramifications of a leak in the Supreme Court, blaming Democrats for attacking the separation of powers.

“The integrity and independence of the Supreme Court is once again under attack,” McConnell told reporters at a press conference.

Schumer, in turn, blamed his counterpart for not wanting to focus on the substance of the issue.

“They do not want to focus on Roe,” he said. “I heard that Mitch McConnell was asked if you’re proud that you got Roe repealed, and he wouldn’t even answer ‘yes’ or ‘no.’ They spent a decade, two decades, trying to repeal Roe, and now they won’t own up to it.”