The tactic of using racial hoaxes worked so well in November 2020 that the Democrats are accelerating race to accrue and retain power.

Since His Election, Biden Has Used Racial Hoaxes To Accrue Power – American Thinker<!—->

The Democrats successfully used a vast racial hoax to put Joe Biden and Kamala Harris into the White House. The problem, then, was helping them stay there. To date, they’ve been relying on new additions to the same racial hoax in order to maintain their political control.

For Democrats, having already weaponized race to attain the White House, January 6 was manna from heaven. Just 0.02% of J6 protesters (244 of 120,000 ) were affiliated with alt-right extremist groups, but creating the illusion of a White supremacist insurrection was child’s play for Team Biden and the sycophant media.

Immediately after the election, CNN concluded that White Republicans “ignore or embrace racism.“

January 6 gave Biden the central theme for Democrats to retain control over the federal government. In Biden’s inaugural address on January 20, 2021, he launched White supremacist domestic terrorism as the biggest threat to America. The Democrat’s partner, BLM, continued supporting the hoax. It ran ads equating J6ers to the KKK and revised its platform to destroy anyone affiliated with J6. 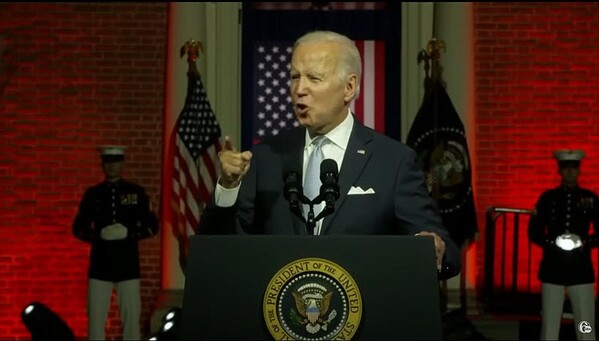 Biden made the perfect pick when he appointed Merrick Garland as Attorney General. No one had a bigger ax to grind against the Republicans. On June 15, 2021, Garland gave a speech about domestic terrorism, which he summed up by saying, “In the FBI’s view, the top domestic violent extremist threat comes from racially or ethically motivated violent extremists, specifically those who advocate for the superiority of the white race.”

On October 4, 2021, Garland honed in on the growing problem of domestic terrorism at school board meetings. These parents were a problem because they were interfering with a critical component of perpetuating the Democrats’ racial hoax: using education to indoctrinate children about white oppressors and non-white victims.

The need to fuel the hoax has heated up in the run-up to the midterms—with a modification expanding its reach. Now, everyone who opposes Biden is part of the greatest threat to the nation.

During a primetime address on September 1, 2022, Biden drew a direct line between white supremacism, Republicans, and the greatest threat to the homeland.

The problem with this evolving hoax, though, is a lack of supporting data, although that’s not for lack of trying.

On September 13, 2022, the FBI issued a single report noting that it had arrested 6,000 violent criminals between May and August. The problem for the Democrats’ narrative was that those arrested were almost exclusively people-of-color gang members and drug traffickers.

In the same period, the FBI put out 20 press releases for people involved with foreign terrorist organizations, and 51 about J6ers, of whom four were identified as white supremacists. There were 3 other domestic terrorist arrests. According to an FBI whistleblower, agents have been instructed to headline each J6er with his or her state of residence to give the illusion of ongoing domestic terrorism all over the United States.

On September 15, 2022, reports surfaced that, for the past 19 months, working without a subpoena, Facebook spied on private messages and then transmitted to the FBI’s domestic terrorism unit any messages indicating opposition to Biden or questioning the election.

Despite this unprecedented access to Americans’ private communications, Biden still couldn’t get enough data to support his claims about what is allegedly the biggest threat to the homeland. On September 15, 2022, it was reported that “the demand for White supremacy” coming from FBI Headquarters “vastly outstrips the supply of White supremacy.” “We have more people assigned to investigate White supremacists than we can actually find.”

Biden and Harris were undaunted by the paucity of White supremacist terrorists. At the United We Stand Conference on September 15, 2022, Biden called for ending immunity for social media because hate groups got too much oxygen there. “White supremacists will not have the final word.”

Harris supported Biden’s assertion with data on hate crimes in 2020. She claimed they surged to the highest rate in over a decade. She was clearly implying an increase in Whites perpetrating hate crimes, but that is not what the data showed. Instead, the data showed Harris perpetuating the hoax. Hate crimes were up over 20% for Asians, Blacks, and Whites, and the known hate-crime perpetrators were disproportionately Black.

In Hate Crime Hoax: How the Left is Selling a Fake Race War, African American author Wilfred Reilly said, “we’re not experiencing an epidemic of hate crimes—but we might be experiencing an unprecedented epidemic of hate crime hoaxes.” He’s right. For over two years, Americans have been victims of the world’s largest racial hoax. As with every Democrat-perpetrated race hoax, it supercharges negative race relations.

America is the most anti-racist nation in the world, and it has the most educated and prosperous minority communities in the world. Team Biden and the Black Lives Matter Global Network Foundation, a 501c3 entity, have engineered a racial hoax that is the lowest blow to which any American administration has stooped to retain power.