His physical appearance and his behavior are consistent with a serious, progressive disease that acts on both mind and body.

After the fourth email of Putin’s hand flapping crossed my desk, I gave in and started my research. Those dozens of dust-binned claims of Putin being on death’s door might even have some credibility. But what do all of those mean? And why me? Just because I spilled the beans on the public evidence that Felonia Milhous von Pantsuit likely suffers from Parkinson’s Disease? Now everyone thinks Vlad has it, too?

Let’s get one thing clear from the beginning. That hand flapping tremor in the video just doesn’t look like Parkinson’s. PD usually has a “pill rolling” tremor, which is much smaller than the one in the video. This agrees with multiple neurologists who are reported to have concluded that whatever Putin may have, PD doesn’t appear likely. Putin’s is a whole-hand flapping tremor of sufficient violence to blow papers off a desk. And at this point, we must make the standard disclaimers.

I have not examined Vladimir Putin. I have not verified the tremor video, but since it came from several usually reliable sources, it appears legit. And that puts me in the same position as our national intelligence analysts. We must make the most reasonable conclusion possible from admittedly inadequate evidence. In other words, it has become my job to rush in where angels fear to tread. As Willie Edwards from “Swamp People” says about us trying to wrangle alligators, “Good luck with that.”

What follows is informed speculation.

Flapping tremors are called “asterixis” and are most commonly a result of alcoholism and liver failure. The tremor is not what should bother us. Rather, the metabolic consequences of lifetime vodka consumption should concern us. That gradually causes liver failure and increased blood ammonia levels. And while ammonia makes glass clear, it does the opposite for thinking. It’s a sedative. And that takes us to something we’re all familiar with: intoxication. But before we get there, we must take a small side trip.

Vladimir Putin is well known as a Stalinist. He believes that the greatest geopolitical tragedy in history is the fall of the Soviet Empire. He would like nothing better than to impose the Kremlin’s iron gauntlet around the neck of all those nations that broke away beginning in 1989. His invasions of Georgia and Crimea seem to be just preludes to dragging many free peoples back under his steel boot. And as a KGB officer, he is well aware of the mechanisms to keep control once it is established. His murder of Alexander Litvinenko, multiple reporters, and attempted murders of Alexei Navalny and Sergei and Yulia Skrupal show us a completely amoral authoritarian.

Imagine this evil character when a bit intoxicated. Alcohol may be a sedative, but vodka doesn’t put you to sleep at first. Instead, it knocks out your self-control centers. The true you comes through. In vino veritas! We are familiar with this from movies where an angry drunk gets into fights. Now imagine that drunk with an army and nuclear weapons. 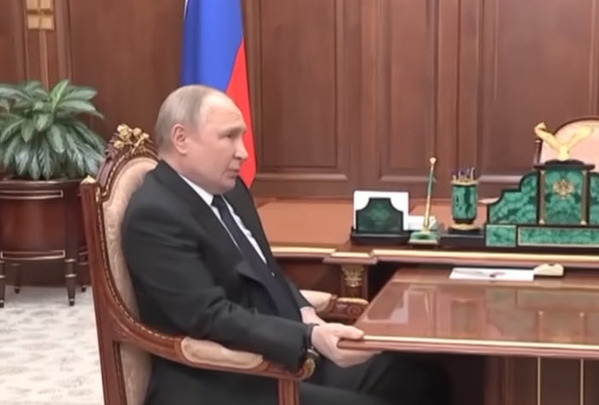 Ammonia in the blood acts as a sedative. It’s quite gradual and, at low levels, we can expect it to behave like alcohol. But it doesn’t go away easily. A failing liver keeps on making it, and the chemistry of the brain locks it in. Here comes the “liver flap.” The control centers slowly go to sleep while the rest of the brain keeps going. Now we have Ivan the Terrible.

The parallels with Adolph Hitler are worthy. While he had Parkinson’s Disease, the loss of judgment is similar. His generals kept telling him the war was lost, but he insisted they push forward to the glorious victory as thousands of Hitler Jugend died for nothing.

Loss of judgment due to liver failure in a powerful megalomaniac is a little different. He believes that he is destined to restore a permanently lost glory. But he has no respect for life in the quest. It matters little that most of his forces are combat ineffective due to casualties. It matters less that years of armor production have become steel alloy salad at the hands of the Ukrainian army. The sinking of his Black Sea flagship is of no consequence. If Ukraine will not surrender, he will bomb it into the Stone Age in his rage. Transnistria and Moldova will join the cauldron. If twenty generals die on the front lines because his army is incompetent, so what? I’ll send the twenty-first. There is only one possible outcome: Victory!

If NATO sends weapons against Putin, then they become legitimate targets. He will strangle their energy supply to bring them to their knees. Every setback becomes reason for another escalation. As his path to victory disappears, he threatens the ace in the hole: nuclear weapons. Faced with such manifest evil, there can be no surrender. The destruction he would cause is far greater than the idiocy of lockdowns in the face of COVID. It would be Venezuela and Cuba on steroids. It even stimulates discussion of assassination to end the threat.

Speaking of steroids, there is credible reporting that Putin is taking them because of back pain from a fall from a horse. Psychosis is a significant concern with chronic use, and it would make all we’ve discussed that much worse.

Before we run off believing that this stream of consciousness is actual fact, there are a couple of bits suggesting otherwise. We haven’t seen Putin’s eyes become jaundiced. And he doesn’t have any apparent ascites—a belly full of fluid from liver failure. But those don’t necessarily prove the negative. Vlad recently visited the hospital for undisclosed reasons. There are several possibilities related to the theory that could explain it.

One other fact must be considered. Liver failure tends to be progressive. So, if Putin is going to live up to his destiny, he doesn’t have all that much time to make it happen. Maybe that’s why he made the push now.

But why don’t the oligarchs rise up to tend to their problem child? Perhaps it’s because the ones who stand up once aren’t ever able to do it again. And this sort of brutal reign of terror seems to be Putin’s goal for the world. So, what can be done?

That’s a question for our Dear Leader. Does the occupant of 1600 Pennsylvania Avenue have enough on the ball to get the job done? Or maybe his puppet master? Inquiring minds want to know.