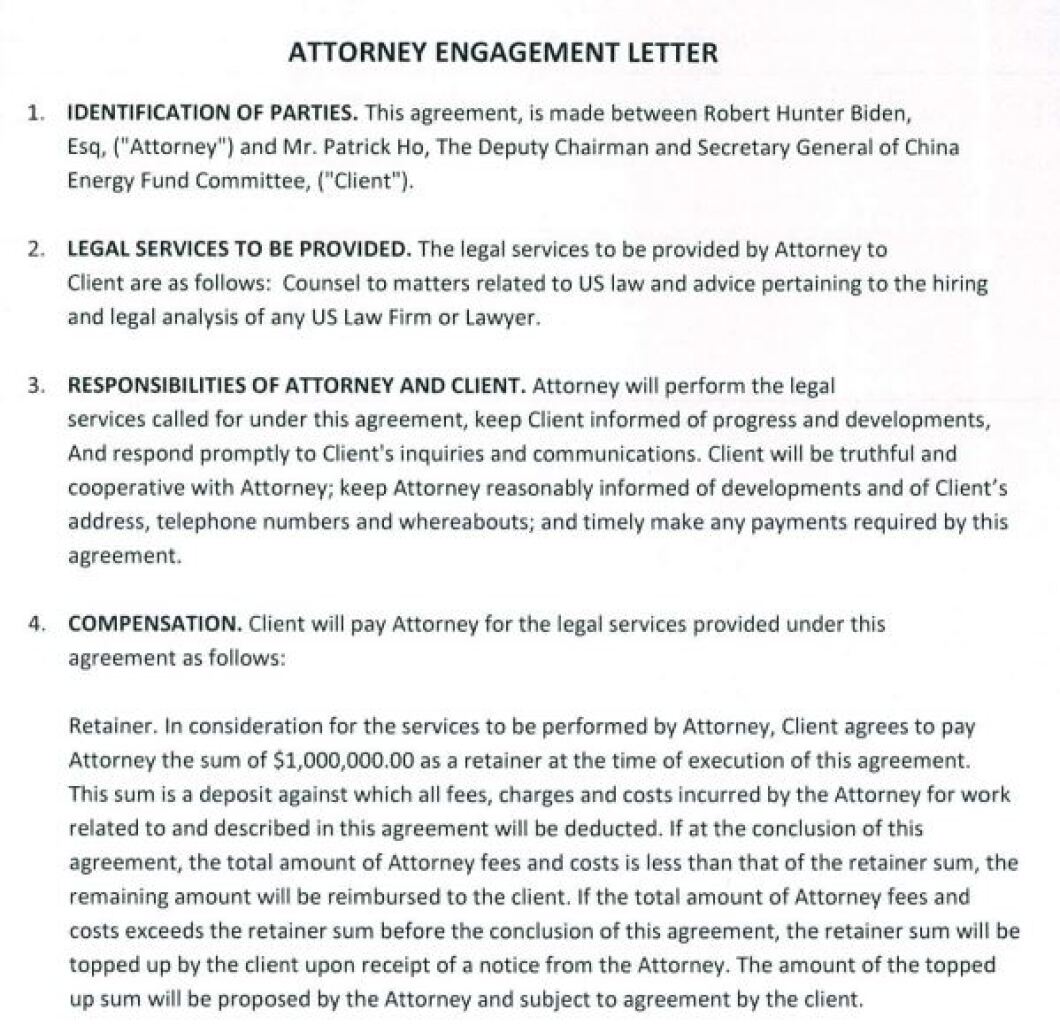 Hunter Biden's business ties to men he believes were connected to Chinese intelligence loom large as he faces an investigation into his taxes, overseas business dealings, and possible foreign lobbying.

Hunter Biden’s business ties to men he believes were connected to Chinese intelligence loom large as he faces an investigation into his taxes, overseas business dealings, and possible foreign lobbying.

Records from a copy of Biden’s abandoned laptop, which has been obtained and reviewed by the Washington Examiner, show he believed some of his Chinese business partners were connected to Chinese intelligence services and that he worried about the Foreign Agents Registration Act.

The president’s son held a lucrative position on the board of Ukrainian energy giant Burisma when his father was vice president. He also pursued business deals in China and elsewhere during and after his father’s tenure and received millions from Chinese government-linked entities. He raked in millions thanks to these associations from 2013 to 2018.

Konstantinos “Gus” Dimitrelos, a cyber forensics expert commissioned by the Washington Examiner to examine the laptop copy, concluded that “there is a 100% certainty that Robert Hunter Biden was the only person responsible for the activity on this hard drive and all of its stored data.”

Located on the laptop was a 47-minute audio recording dated May 11, 2018, in which Biden spoke about his relationship with Patrick Ho, the vice-chairman of the now-defunct Chinese energy conglomerate CEFC. Biden referred to Ho as “the f****** spy chief of China.”

“I have another New York Times reporter calling about my representation of the, literally, Dr. Patrick Ho — the f****** spy chief of China who started the company that my partner, who is worth $323 billion, founded and is now missing,” Biden lamented. “The richest man in the world is missing, who was my partner.”

Ho was working for Ye Jianming, chairman of CEFC, as the company pursued business in the United States and around the world.

Dimitrelos examined the audio recording and said it “has not been manipulated and is authentic.”

Eight months later, on Jan. 19, 2019, Biden copied the recording to his iTunes and renamed it the “Most Genius S*** Ever.” Two days later, Biden played the file at least one time, Dimitrelos added.

Ho was sentenced to three years in prison in March 2019 for violating the Foreign Corrupt Practices Act. He was deported to Hong Kong in June 2021 after serving his sentence.

The first call Ho made after his arrest in 2017 was to President Joe Biden’s brother, James, who has said he thought the call was meant for Hunter Biden.

Ho agreed to a $1 million retainer with Hunter Biden for “counsel to matters related to U.S. law and advice pertaining to the hiring and legal analysis of any U.S. law firm or lawyer,” according to an “attorney engagement letter” located on the hard drive.

Ho had tried reaching out for help because Hunter Biden agreed to represent him as part of his efforts to work out a liquefied natural gas deal worth tens of millions of dollars to Ye, who has since disappeared in China. Chinese state-run media named him in an alleged corruption case in 2018, and China allowed CEFC to go bankrupt.

Hunter Biden said of Ye in the 47-minute recording: “He was missing since I last saw him in his $58 million apartment inside a $4 billion deal to build the f****** largest f****** LNG port in the world … and I am receiving calls from the Southern District of New York from the U.S. attorney himself.”

Hunter Biden’s sister-in-law, Hallie, appeared to reference his meetings in Miami with CEFC in a text she sent one of his children on May 7, 2017. The text was located on a copy of the laptop.

“He is at the hotel still dealing with the Chinese and meetings,” Hallie Biden wrote in the text, which was sent about five days after Hunter Biden’s former business partner Tony Bobulinski said he met Joe and Hunter Biden in person to discuss the business deal with CEFC.

Bobulinski released a separate trove of WhatsApp text messages in October 2020 not found on the laptop that show the pair discussing business meetings involving Joe and Hunter Biden and CEFC in May 2017.

Hunter Biden said in one of the messages to Bobulinski that they needed to be careful not to engage in any activities that would require them to register as foreign agents.

Republican Sens. Chuck Grassley of Iowa and Ron Johnson of Wisconsin have accused the Department of Justice of giving them the run-around in response to their requests to the DOJ for all intelligence records tied to Chinese government-connected foreign nationals who had business dealings with Hunter Biden.

The case against Ho revealed that some evidence had been obtained through the Foreign Intelligence Surveillance Act. Grassley’s office told the Washington Examiner that the DOJ is still withholding details on that.

Blue Star, a Democratic lobbying firm that worked with Burisma when Hunter Biden served on its board, announced last week that the Justice Department had cleared it of any wrongdoing in connection to work with the Ukrainian energy company in the 2015 and 2016 time frame, according to congressional testimony by the firm’s executives.

However, Blue Star also revealed it submitted a new retroactive FARA filing disclosing it had acted as a foreign agent for Burisma in 2016.

Blue Star was originally approached by Hunter Biden’s business partner, Devon Archer, also a board member on Burisma, to assist the Ukrainian company amid criticisms from U.S. officials that it and its owner, Mykola Zlochevsky, a Ukrainian oligarch, were corrupt.

Archer was sentenced in February to just over a year in prison for an unrelated fraudulent bond scheme.

Hunter Biden emailed Archer on April 13, 2014, writing that “the announcement of my guys upcoming travels,” which appears to be a reference to his father’s pending visit to Ukraine, “should be characterized as part of our advice and thinking — but what he will say and do is out of our hands. In other words it could be a really good thing or it could end up creating too great an expectation.”

“We need to ask for long term agreement and across the board participation. This is a huge step for us that could easily become very complicated. And if we are not protected financially regardless of the outcome we could find ourselves frozen out of a lot of current and future opportunities,” Hunter Biden said of Burisma in the same email. “To that end they need to know in no uncertain terms that we will not and cannot intervene directly with domestic policy makers, and that we need to be abide by FARA and any other U.S. laws in the strictest sense across the board.”

Dimitrelos examined the email and its header data and determined the message to be authentic.

Hunter Biden referenced Archer in the “Most Genius S*** Ever” recording.

In his 2021 memoir Beautiful Things, Hunter Biden called the Burisma work “inspiring” and “consequential” while also admitting that “the pay was good” and that “there’s no question my last name was a coveted credential.”

Former assistant U.S. attorney Andrew McCarthy told the Washington Examiner that “there has been a concerted effort to refer to the Justice Department’s probe as the ‘Hunter Biden tax investigation’ in order to obscure the fact that Hunter Biden and his taxes are the least consequential aspects of it. The investigation should be called the Biden investigation.”

“Besides the fact that it implicates several members of the Biden family, the relevant inquiry is: Why, when President Obama made Vice President Biden the point man for U.S. policy regarding various countries, did people closely aligned to the regimes of those countries believe it was in their interest to pour millions of dollars into Biden family ventures?” McCarthy said.

Johnson told the Washington Examiner that “when Sen. Grassley and I released our September 2020 and November 2020 reports detailing the Bidens’ foreign financial entanglements, the corporate media largely ignored our findings. Now, they have been forced to acknowledge the authenticity of Hunter’s laptop, but they are still ignoring the national security implications of our report.”

Hunter Biden’s lawyers did not respond to a request for comment.